• These breakthroughs will make 2021 better than 2020 Humans have never made more progress on any disease in a year than the world did on COVID-19 this year. Under normal circumstances, creating a vaccine can take 10 years. This time, multiple vaccines were created in less than one year. (GatesNotes)
• Coronavirus has altered Christmas. But in a few countries, it looks a little like normal. While Christians in the Americas, Europe, India, Russia and elsewhere have had to curtail their holiday celebrations due to coronavirus restrictions and widespread infections, in some parts of the world, the holiday is set to proceed like it normally does: Australia, New Zealand, Rwanda, Taiwan and Vietnam have rolled back regulations to allow for Christmas celebrations or already had few restrictions in place. (Washington Post)
• Philanthropists Push for Charitable Giving Reforms High-profile philanthropists and foundations have come together to push for reforms to charitable giving laws that would increase the amount of money available for nonprofits. Under current regulations established in 1969, private foundations are obligated to pay out 5% of their assets to public charities annually. The rest can be invested as the foundation chooses, and passed down through generations. (Barron’s)
• The Bank Underground Christmas Quiz The Bank of England’s Annual Bank Underground Christmas Quiz! Test your knowledge on our festive themed questions on economics, finance and all things central banking… (Bank Underground)
• Gift Cards Are the Go-To Holiday Gifts of 2020 For obvious reasons, Shoppers are splurging on gift cards in December amid concern over store visits and shipping delays, as Covid-19 cases surge (Wall Street Journal)
• Chobani’s Anti-CEO Is a Pro-Employee Billionaire in Expansion Mode Founder Hamdi Ulukaya on upending yogurt, rebuilding communities, and leading through the pandemic.  (Businessweek)
• The World’s Most Loathed Industry Gave Us a Vaccine in Record Time In a time where almost everything else went wrong, the vaccine effort was something that went (mostly) right. The Covid-19 vaccines will  prevent millions of deaths around the world. They will revive trillions of dollars in economic activity, let grandparents see grandchildren, and finally bring an end to a year that has—sing it together one last time as the ball drops over an empty Times Square—really sucked. (Businessweek)
• A Holiday Haunted by Loss: This was the year of the empty seat at the table. We spent Thanksgiving with seven families who lost loved ones to Covid. (New York Times Magazine)
• Charlie Brown’s Inside Job What gives the 1965 Peanuts special its staying power? Charlie Brown Christmas special—funny, cool, beloved by all—was first broadcast in 1965, when Charles Schulz’s Peanuts cartoon strip was in the initial flush of its stupendous popularity (The Atlantic)
• All we want for Christmas is … these songs. Here’s why. For a few weeks every winter, popular music tumbles into a time warp. Old-school trumps cutting edge. Greatest Generation artists rule millennial playlists. A 25-year-old song leads the pop charts — and it’s considered a “new” entry into the Christmas canon. Twenty-three songs have been in the top half of Billboard’s Holiday 100 nearly every week since the list began in 2011, and 15 of them were written before 1970. (Washington Post)

Be sure to check out our Masters in Business interview this weekend with Jeff Poggi, co-CEO of McIntosh Group, manufacturer of audiophile components widely regarded as among the finest in the world. Despite the pandemic, the company notched their best sales year in their 70-year history.

The economics of unused gift cards 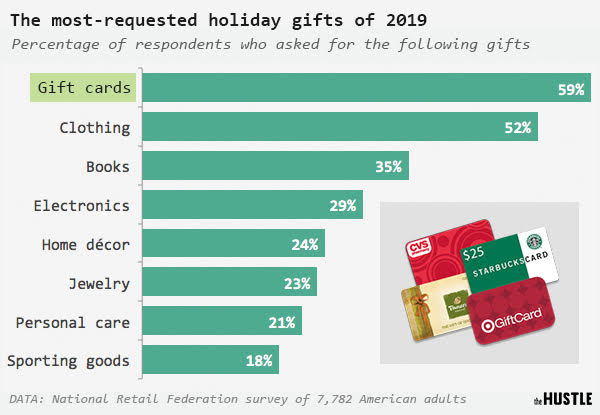