Bird Song of the Day

At reader request, Birds of Australia.

At reader request, I’ve added this daily chart from 91-DIVOC. The data is the Johns Hopkins CSSE data. Here is the site.

I feel I’m engaging in a macabre form of tape-watching. 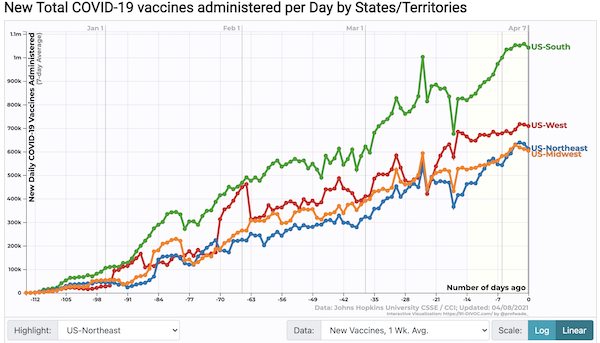 A little dip, hopefully supply not demand. • Early in February, I said a simple way to compare Biden’s performance to Trump’s on vaccination would be to compare the curves. If Biden accelerated vaccine administration, the rate of vaccination post-Inaugural would kink upward, as the policies of a more effective administration took hold. They have not. The fragmented, Federalized, and profit-driven lumbering monstrosity that we laughingly call our “health care” “system” has not responded to “energy in the executive,” but has continued on its inertial path, albeit in an upward direction. 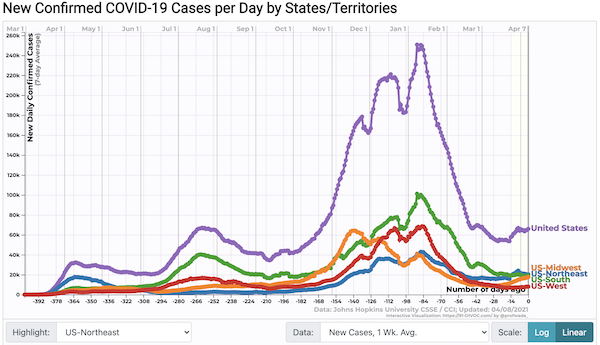 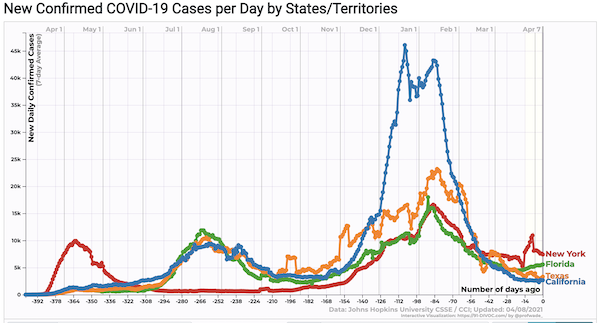 The big drop in New York, but flattening. Florida on the continues its slow climb. 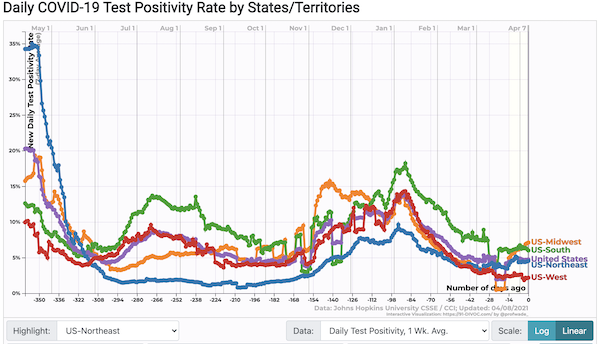 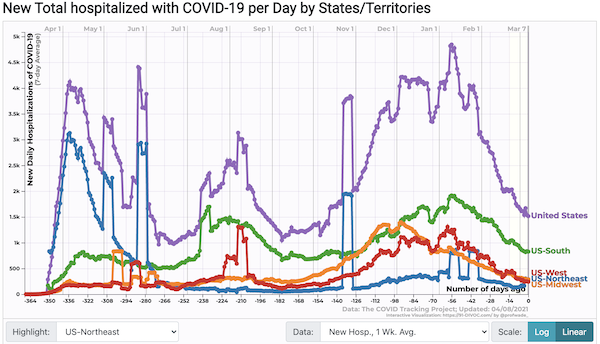 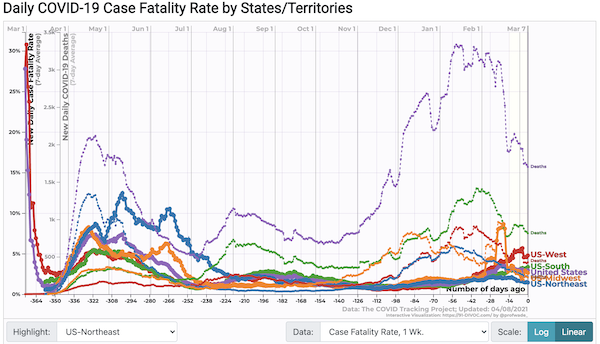 Good to see those deaths dropping. The fatality rate in the West is dropping now, for some reason as unknown as why it rose.

Readers, I have posts to finish, and so this will be an open thread, with nothing but the standing elements: Bird Song of the Day, Covid charts, and the plant. I will return tomorrow. –lambert

Here is a short parable for our times:

“The guy driving the Suez Canal excavator says he got by on 3 hours of sleep a night and hasn’t been paid his overtime yet” [Business Insider].

Freeing the Ever Given was an international effort, with winches, dredgers, tugboats, and excavators all brought in. But Abdul-Gawad was the man who was literally at the rock face of the problem. Once he got to the base of the ship, there was no choice but to start digging. In his estimation, the Ever Given’s bow was lodged about 6 meters, or 20 feet, higher than where the ship ought to have been floating. Its stern was also sitting on the opposite bank, and the sideways ship was blocking all traffic.

Under the looming sides of the ship, he feared destabilizing the ship and having it topple onto him. “The thing is, I was terrified that the ship might list too far to one side or the other,” he said. “Because if it fell onto its side on me, then it’s goodbye me, and goodbye excavator.”…

Two more excavators arrived at the scene a couple of days in, but their drivers were too apprehensive to do what Abdul-Gawad was doing, he said. Instead, they cleared away the materials near the base after he had dug it out.

Driving the excavator in his flip-flops, Abdul-Gawad undertook hours of digging.
This would be followed by half-hour bursts of the tugboats making an attempt to pull the vessel, when Abdul-Gawad and his machine would get a walkie-talkie signal to retreat.

On Thursday 25, a specialized dredger boat – the Mashhour – joined the efforts. Abdul-Gawad’s job was to shift rock and sand material from the ship’s bow while the Mashhour dislodged the silt from the canal bed, he said.

The combined effort – with the help of a high tide – gave hopeful signs the next day, and finally succeeded on March 29. Ever Given’s release set every worker cheering – and tugboats honking – in celebration.

Abdul-Gawad said he had barely been included in the celebrations. Aside from a small ceremony held by one newspaper, he has received almost no official recognition for his role, he said. “I was invited to the ceremony where they honored the people who got the ship out,” he said. It was mainly for Suez Canal Authority employees, he said, which does not include Abdul-Gawad since he works for a subcontractor.

He said it felt like an afterthought. The event was in a city four hours away, and he got the invitation an hour and a half in advance, he said.

Plus, they owe him for the overtime. The fate of “essential workers” everywhere!

NOTE Kudos to Business Insider for getting this story. I can’t imagine why the New York Times or the Washington Post didn’t.

Readers, feel free to contact me at lambert [UNDERSCORE] strether [DOT] corrente [AT] yahoo [DOT] com, with (a) links, and even better (b) sources I should curate regularly, (c) how to send me a check if you are allergic to PayPal, and (d) to find out how to send me images of plants. Vegetables are fine! Fungi and coral are deemed to be honorary plants! If you want your handle to appear as a credit, please place it at the start of your mail in parentheses: (thus). Otherwise, I will anonymize by using your initials. See the previous Water Cooler (with plant) here. Today’s plant (LL): 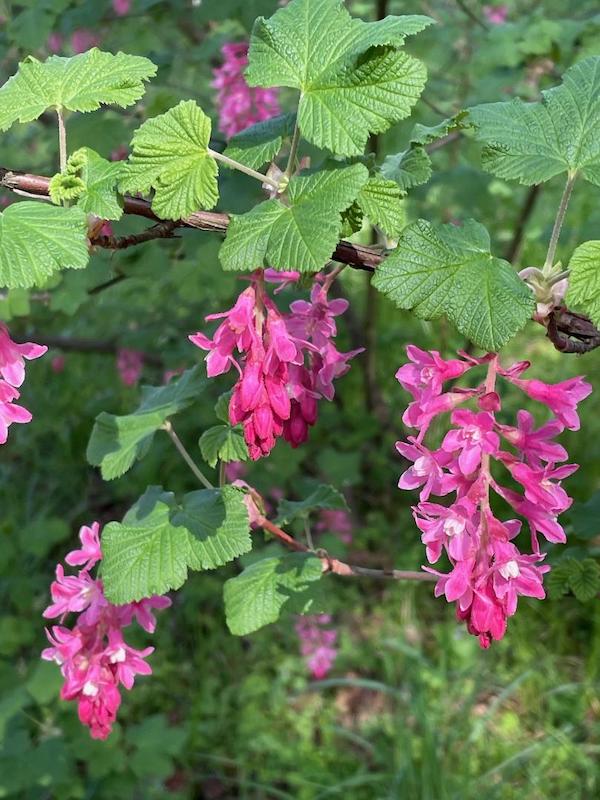 LL writes: “We’re having a bit of Chinook Spring and the flowering trees are out in full force. From my walk on Saturday.” As readers know, I encourage walks, especially photographic ones.

Readers: Water Cooler is a standalone entity not covered by the recently concluded and — thank you! — successful annual NC fundraiser. So if you see a link you especially like, or an item you wouldn’t see anywhere else, please do not hesitate to express your appreciation in tangible form. Remember, a tip jar is for tipping! Regular positive feedback both makes me feel good and lets me know I’m on the right track with coverage. When I get no donations for five or ten days I get worried. More tangibly, a constant trickle of donations helps me with expenses, and I factor in that trickle when setting fundraising goals:

Here is the screen that will appear, which I have helpfully annotated.

If you hate PayPal, you can email me at lambert [UNDERSCORE] strether [DOT] corrente [AT] yahoo [DOT] com, and I will give you directions on how to send a check. Thank you!