A Mini-Tour of Christmas/Holiday Feasts and Traditions

A Mini-Tour of Christmas/Holiday Feasts and Traditions

I’m putting of discussing the “maybe we really have a [thin] post-Brexit trade deal” till we can get a look in the box, but border backups were raising worries about Christmas provisions, even before France put a 48 hour hold on shipments to France. Some of the participants in the NC Brexit brain trust e-mail chain didn’t realize, at least until they’d seen it on Twitter, that seafood is an important part of the holiday meal for many in France. Vlade suggested that readers describe on Christmas/holiday feast traditions in their part of the world, both food and customs, since they vary so widely. As he explained:

Europe it actually differs quite a bit even within short distances (say even in Czech Republic there are some small differences in traditional food, and more so between Czechs and Slovaks, never mind Poles, Germans, Austrians… )

In a lot of the world, gifts are delivered by an obese jolly old man with propensity for drink. But for some reason, in CZ/Slovakia/Poland and Hungary, it’s the baby Jesus. Which for some weird reason is also the person in some Lat Am countries – but not in Spain, as I understand.
– in some countries (I’d say most non-AngloSaxon, but could be wrong), the gifts are given on Xmas eve, because in Jewish tradition (which Christians took for theirs) the day begins with evening (cf book of Genesis).
– while fish is the traditional Czech/Slovak/Polish Christmas Eve dinner*), for Christmas day and Boxing day it’s usually duck or goose, eaten with cabbage and dumplings.

*) fish having been reclassified as not-meat by the Church in the medieval times, and IIRC Christmas Eve was the last day of the pre-Christmas fast. Christmas Eve was a strict fasting _day_. I write day, because the fast lasted until the observation of the first star (no idea what they did on cloudy days). This is still the custom in the CZ, even though the country is one of the least-religious on earth, and I remember how as kids (in a socialist Czechoslovakia, so even less religious than now, and with neither of my parents religious) we were told to fast as to see a Golden Pigglet (you got to induce the kids to fast somehow I guess). Which we of course never did, as the lure of Xmas sweets **) was just too much.

**) there’s a tradition of Christmas sweets, which are supposed to be home-made, and there should be at least seven different types (some say 12). Looks like (not an exhaustive collection, as the types vary widely by region): 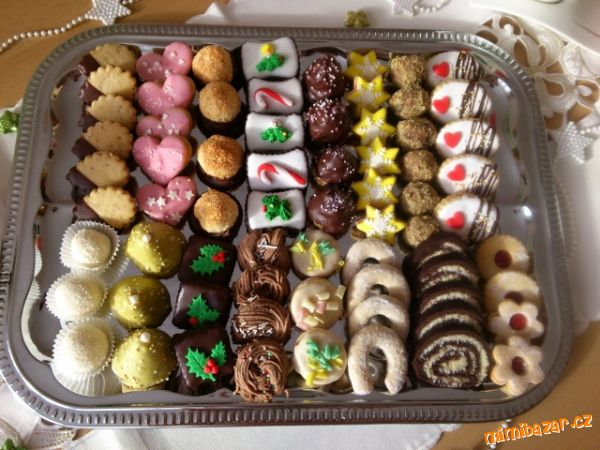 My mother, who is half Hungarian, half Swedish, may have been picking up on that tradition with her Christmas cookies. She made a ridiculously large variety: rum-soaked nut balls, shaped cookies made with lots of egg yolk, cookies with a raisin puree (rolling out the dough, cutting out the tops and bottoms, placing the raisin puree on the bottom and then putting on the tops and crimping the sides was quite a process), springles, a no-name cookie with a shortbready dough, rolled into balls and coated with in finely minced walnuts, then pressed in the center to make an indentation big enough to hold some jam (usually strawberry), and some bar cookies. I never thought of her as working towards a number, but there would usually be seven or more, which she’d make place in cookie tins and give an assortment to friends (not to worry, we kids got our fill too).

I knew from a good Polish friend that the Poles normally have a whole fish, typically carp, as the centerpiece of their Christmas feast.

So back to France, where some cooks are having to make late-in-game substitutions for their usual fare:

He was speaking on @BFMTV pic.twitter.com/Q1liKd3RfR

Lorries transporting lobster & scallops to FR for Christmas are stuck in Kent queue…meanwhile #Brexit talks seem to be giving no thought to fish/seafood exporters, only to quota for taking fish out of the sea, which is useless if the 70% of the catch which is exported can’t be

David and Colonel Smithers confirmed the popularity of seafood. From David:

Yes, fish is a big thing on the traditional menu for Christmas Eve, which is the main meal of the holiday. We’re not talking Cod though – more the luxury end of the market with fruits de mer, lobster, crab and so one. Salmon from Scotland is also popular, which might be a problem at the moment.

Duck and wild boar are popular in France and its former colony, Isle de France.

When Christmas comes early! My super generous in-laws bought us a box of goodies from @guygrieve and we’re so excited to eat our hand dived scallops, live langoustine and mussels. Any recipe suggestions most welcome! ps the Isle of Mull cheeses look rather yummy too! pic.twitter.com/9Q0C2RG7w7

We Americans tend to assume that British holiday fare is like ours, when goose and duck are so much better than domesticated turkey that I can’t imagine that turkey has gotten much of a following. Americans also eat ham for Christmas. The side dishes are similar to the ones at Thanksgiving: stuffing (hooray!) potatoes (white mashed, sweet, sweet in a casserole…), cranberry relish, and if you are lucky and get a break from death by starches, a salad or Brussel sprouts or perhaps green beans.

In the old days, big birds (turkey and goose, my mother converted my father from turkey to goose or duck for holidays) came with the innards, the gizzard, heart and liver, which I assume most people would mince in with their stuffings. My mother would cook them in the roaster and they were my favorites (I also adore but seldom get to eat sweetbreads, most of all lamb sweetbreads). You never see them now. I bet they go into pet food.

We did many stuffings over the years: bread, cornbread, oyster, chestnut. Chestnut was my favorite, but that was back in the day where you’d have to roast and pell them yourself, and even with my help, my mother deemed that to be Too Much (I love marron glacé too). My father insisted on small white boiled onions, well buttered, and mashed rutabaga as Yankee staples.

Even though I was never in the UK in the winter, I am pretty sure they don’t have our horrible Christmas cake (one company has dominated the trade for decades and their offering makes for a better doorstop than food). It’s too bad plum pudding and suet pudding never got a following over here. Is trifle eaten at the holidays?

Our desserts were also substantial. We’d always have three pies: an apple pie (my mother’s is great; the men at my father’s hunting camp insisted he bring it every time he came), a pumpkin pie, and a mince pie, with vanilla ice cream for those who wanted some along side. Mince pie was my father again invoking his Yankee heritage. My mother tried many variations, including traditional ones with venison (shot by my father). Even though he liked them all, he was the only one who was keen about them.

I never understood candy canes and fortunately was not subjected to them overmuch. We would get Christmas stockings with the stereotypical “stocking stuffer” small inexpensive gifts and candy. For many years, my mother got a delicious ribbon candy which she’d give us only at Christmas.

There are too many traditions around the world to give a proper tour, but let me highlight a couple that differ a fair bit from the Anglo version. Despite having been populated by English and Irish, the Australians have different favorites, due in no small measure to Christmas falling in their summer. The one Christmas I had there was with vegetarians, so I didn’t get a classic meal. But I understand prawns, oysters, cold ham and turkey, and potato bake are popular. For sweets, pavlova, Christmas cake (not our American mass produced version) and trifle are staples.

And in Japan…Kentucky Fried Chicken is number one! The Japanese also have a Christmas cake, but it’s not the Anglo dried fruit type but a strawberry shortcake or a buche de Noel as well as Japanese sweets called wagashi. Wagashi isn’t terribly sweet and are usually made of moichi or red bean paste (I very much like anko) and can be made into holiday shapes like Santas. Christmas buffets at hotels, featuring Japanese and Western dishes, are also popular:

Please tell us what the locals do in your part of the world. And I hope you are able to have a festive meal later today or tomorrow.