As we’ve described at length over the years, investors like CalPERS are violating their fiduciary duties when they invest in private equity. Remember that a basic requirement is to evaluate the costs and risks of a possible investment against its potential returns.

With private equity, limited partners like CalPERS do not know the full costs of their private equity investments. Many, particularly charges made directly to portfolio companies, are astonishingly kept secret. But even worse, investors don’t really know what they make from private equity either. We’ve pointed out some of the many cons private equity managers make to goose apparent returns, such as exaggerating the value of portfolio companies early in a fund’s life (which will particularly juice the misleading but widely used IRR calculation as well as benefiting fundraising, since new funds are typically raised 4-5 years after the last “flagship fund” launch).

Private equity experts Eileen Appelbaum and Jeffrey Hooke have publishing a damning new analysis, using CalPERS data, on another private equity trick we’ve written about, that of keeping dogs in the portfolio at their original purchase price rather than writing them off or selling them at a realistic price. Not only does this happen, but it’s a significant practice. Private equity firms like to wind up in eight, at worst ten years, so any companies still held in portfolios after that time frame are dregs.

Moreover, the fact that they are overvalued at this point means they have been overvalued all along. So all the past valuations for the unsold portion of the portfolio were too high, inflating returns. The rotting leftovers are the most visible evidence of fund manager funny business, but there’s plenty more. From Appelbaum’s and Hooke’s new paper:

Even as the stock market is in free fall and interest rates are rising, private equity (PE) funds continue to pursue new investors, peddling the myth that private equity returns defy the laws of financial gravity…How is this amazing sleight of hand accomplished?….

Year-to-year PE fund returns consist of how much the fund received—or cashed out—from these sales of portfolio companies plus the value of the remaining unsold companies still in the fund’s portfolio.

That’s where the mischief comes in.

The PE firms that set the prices of these companies have little incentive to reassess their value. The guesstimates of the value of the fund’s unsold inventory form the basis for the myth of PE funds’ strong performance and that they serve as a hedge against a falling stock market….

So, about all those terrific private investments that have supposedly provided souped-up returns for the last dozen years: Guess what? Many of the companies that were acquired are still sitting on the shelf, waiting for the PE fund to sell. And thus….a significant amount of the funds’ returns is unrealized, a figment of the PE managers’ fertile imaginations and failure to adjust the values of companies in their portfolios to changed market conditions (that is, to mark-to-market). 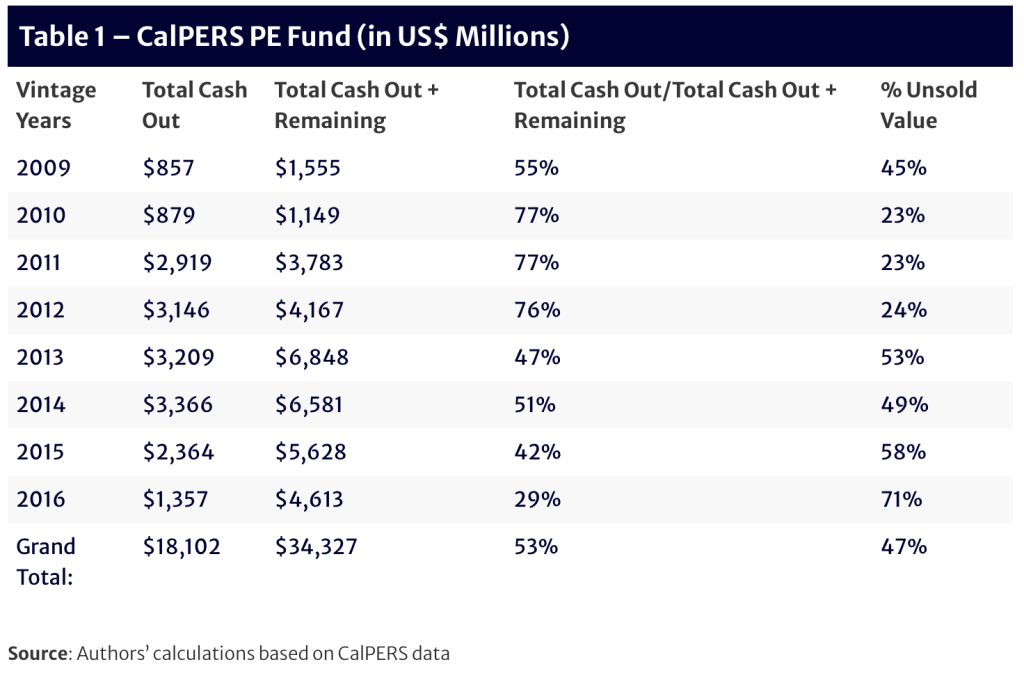 As Table 1 points out, the unsold portion of the total value averages 47 percent for vintage years that are between 6 and 13-years-old. The 2009 vintage still has 45 percent of its value tied up in companies sitting on its shelf, whose value is largely a guesstimate by PE fund managers. Managers’ guesstimates account for almost a quarter of the value of the other mature funds with vintages dating back 10 years or more. More recent vintages have much higher proportions of unsold inventory, with the 2013 vintage, now working on its tenth year, stuck with 53 percent unsold, and the 2016 vintage with 71 percent unsold.

CalPERS did not respond to our request for its comment on this analysis of CalPERS’ data.

In another fresh blow to CalPERS’ private equity fetishism, one of the deans of investment management and financial analysis, Richard Ennis, published a new paper that we’ve embedded at the end of this post. We strongly urge you to read it in full. Some of its damning findings:

Large public pension funds have piled into largely illiquid alternative investments, such as private equity, private real estate and hedge funds, in recent decades. The average allocation to “alts,” as they are often referred to, increased from less than 10% in 2001 to more than 30% at June 30, 2021.The motivation for this major asset allocation shift was that alts were thought to provide a diversification benefit plus an alpha owing to market inefficiency and the accessibility of skillful managers. I have shown (Exhibit 3, from Ennis, 2021a) that alts generally haven’t contributed to public fund diversification, at least not since the Global Financial Crisis of 2008 (GFC). Exhibit 11 indicates that, at the same time, alternative investments, in general, ceased to be a source of positive alpha. 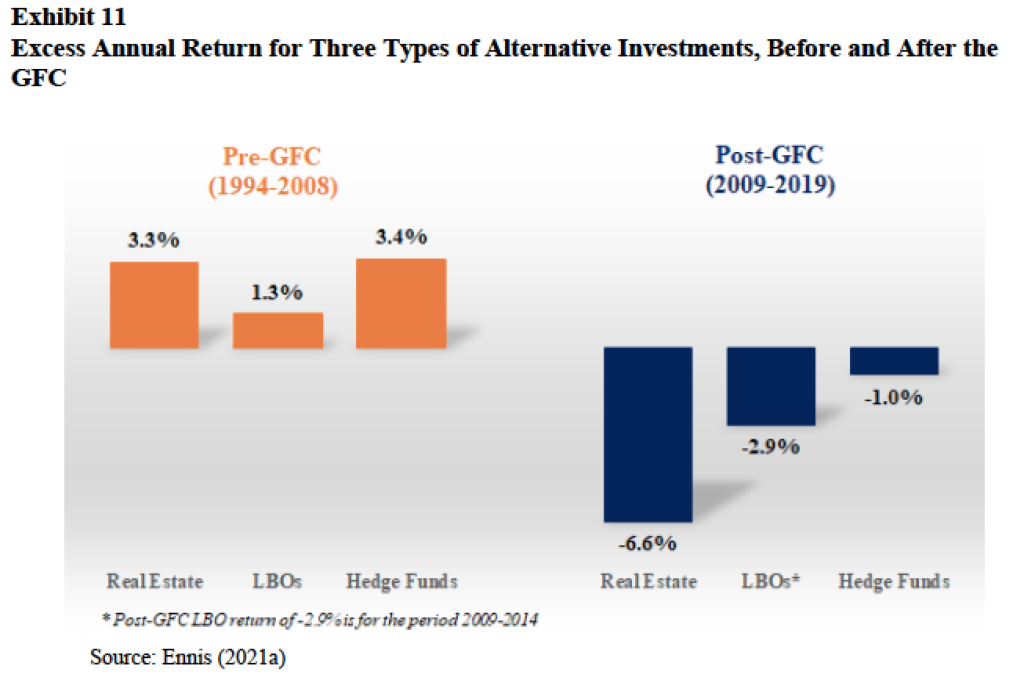 Exhibit 12 indicates that alternative investing has hurt the performance of public pension funds. It illustrates the relationship between the alpha earned by the 59 funds described above and their exposure to alternative investments for the 13 years ending June 30, 2021. The slope coefficient is -0.039, with a significant t-statistic of -3.1. The negative slope indicates that a reduction in alpha of nearly 80 basis points per year relative to marketable securities alone is associated with a 20% allocation to alts, and 120 bps for a 30% allocation. An interpretation of the latter result is that the underperformance of alts alone has been sufficient to account for the overall underperformance (at -1.21% per year) of public funds.

In other words, public pension funds would do better if they abandoned private equity and other “alts” entirely. Ennis lays out a preferable investment strategy.

And in case you might try contending that these sorry findings might apply less to CalPERS, by virtue of its size and correspondingly large and well-paid investment staff, don’t. A earlier study by Ennis found that CalPERS was near the bottom of all public pension funds in its performance, and generated one of the highest levels of “negative alpha,” as in destroying value through poor investment management.

Recall that CalPERS had to rejigger its benchmark to hide private equity underperformance, not only changing the stock indexes used as a reference, but even more important, cutting the risk premium from 300 basis points to 150 when there’s been no change in the riskiness of private equity compared to public stocks.

Despite that, CalPERS has increased its private equity allocation from 8% to 13% of its portfolio. Last December, Institutional Investor published an article voicing doubts about this change. For instance:

One former member of CalPERS’s senior investment team, Ron Lagnado, is raising concerns about the plan. “That’s an enormous amount of money to be shoveling into private equity,” Lagnado said. “Everybody is trying to crowd into the space. If this is all the largest pension fund in the United States is going to come up with, I don’t think they’re thinking carefully about what they’re doing.”…..

“I have no axe to grind,” Lagnado said in response to a question about his criticism of the CalPERS plan. “I voluntarily left.” But Lagnado is passionate about how public pensions will make good on their promises to investors and the limitations of traditional approaches to diversification, including the diminishing protection that comes from bonds during a drawdown. He previously argued in an II opinion piece that state pension funds are underfunded and that will only get worse when markets inevitably turn down “A considerable body of evidence shows these funding problems are connected with how most pension portfolios have been constructed for more than a decade. Without changing the approach, it seems unlikely that funded status can be improved in the coming decade through investment performance alone.”

CalPERS’ unwarranted loyalty to private equity, in combination of the giant pension fund having been used in the past to launder political money via “pay to play” and bribes that landed former CEO Fred Buenrostro in Federal prison, have led insiders to come more and more to the view that something isn’t on the up and up. Mere stupidity isn’t adequate to justify this level of value destruction.