Yves here. While the press has made some attempts to identify climate change/environmental feedback loops, they tend to focus on simple ones, like higher temperatures leading to ocean floor and Siberian permafrost methane releases, or polar ice melts leading to heat-reflecting white surfaces being replaced by heat-absorbing dark waters.

This article discusses how severe storms can sluice down burn scars, worsening damage to soil and even creating landslides.

The evacuations at one point included all of Montecito, home to around 8,000 people – and the site of the state’s deadliest mudslide on record exactly five years earlier.

Wildfire burn scars are particularly risky because wildfires strip away vegetation and make the soil hydrophobic – meaning it is less able to absorb water. A downpour on these vulnerable landscapes can quickly erode the ground, and fast-moving water can carry the debris, rocks and mud with it.

Officials warned of a risk of debris flows near several recently burned areas, including near Santa Barbara and Los Angeles, Monterey and Santa Cruz counties and the Shasta Trinity National Forest.

I study cascading hazards like this, in which consecutive events lead to human disasters. Studies show climate change is raising the risk of multiple compound disasters, including new research showing increasing risks to energy infrastructure.

Five years ago, on Jan. 9, 2018, a deadly cascading disaster struck Montecito, a community in the coastal hills near Santa Barbara.

The cascade of events had started many months earlier with a drought, followed by a wet winter that fueled dense growth of vegetation and shrubs. An unusually warm and dry spring and summer followed, and it dried out the vegetation, turning it into fuel ready to burn. That fall, extreme Santa Ana and Diablo winds created the perfect conditions for wildfires.

The Thomas Fire began near Santa Barbara in December 2017 and burned over 280,000 acres. Then, on Jan. 9, 2018, extreme rainfall hit the region – including the burn scar left by the fire. Water raced through the burned landscape above Montecito, eroding the ground and creating the deadliest mudslide-debris flow event in California’s history. More than 400 homes were destroyed in about two hours, and 23 people died.

Video from the 2018 disaster in Montecito shows how quickly a mudslide can overtake a town.

These kinds of cascading events aren’t unique to California. Australia’s Millennium Drought (1997-2009) also ended with devastating floods that inundated urban areas and breached levees. A study linked some of the levee and dike failures to earlier drought conditions, such as cracks forming because of exposure to heat and dryness.

The individual hazards might not be very extreme on their own, but combined they can become lethal. These types of events are broadly referred to as compound events. For example, a drought and heat wave might hit at the same time. A cascading event involves compound events in succession, like wildfires followed by downpours and mudslides.

3 significant atmospheric rivers will batter California over the next 10 days, putting a sizeable dent in the ongoing severe drought.

Widespread snow totals of 100+ inches are expected above 8,000 feet in the Sierra, with 6-12″ of rain in NorCal and 3-6″ in SoCal. pic.twitter.com/lBSUTqgkIP

With compound and cascading events likely to become more common in a warming world, the ability to prepare for and manage multiple hazards will be increasingly essential.

Several research studies have shown that compound events that include both drought and heat waves have become more severe and frequent in recent years. Studies have also shown that droughts and heat waves increase the likelihood of wildfires. And wildfires can also trigger other cascading hazards, turning otherwise unexceptional events into human disasters. 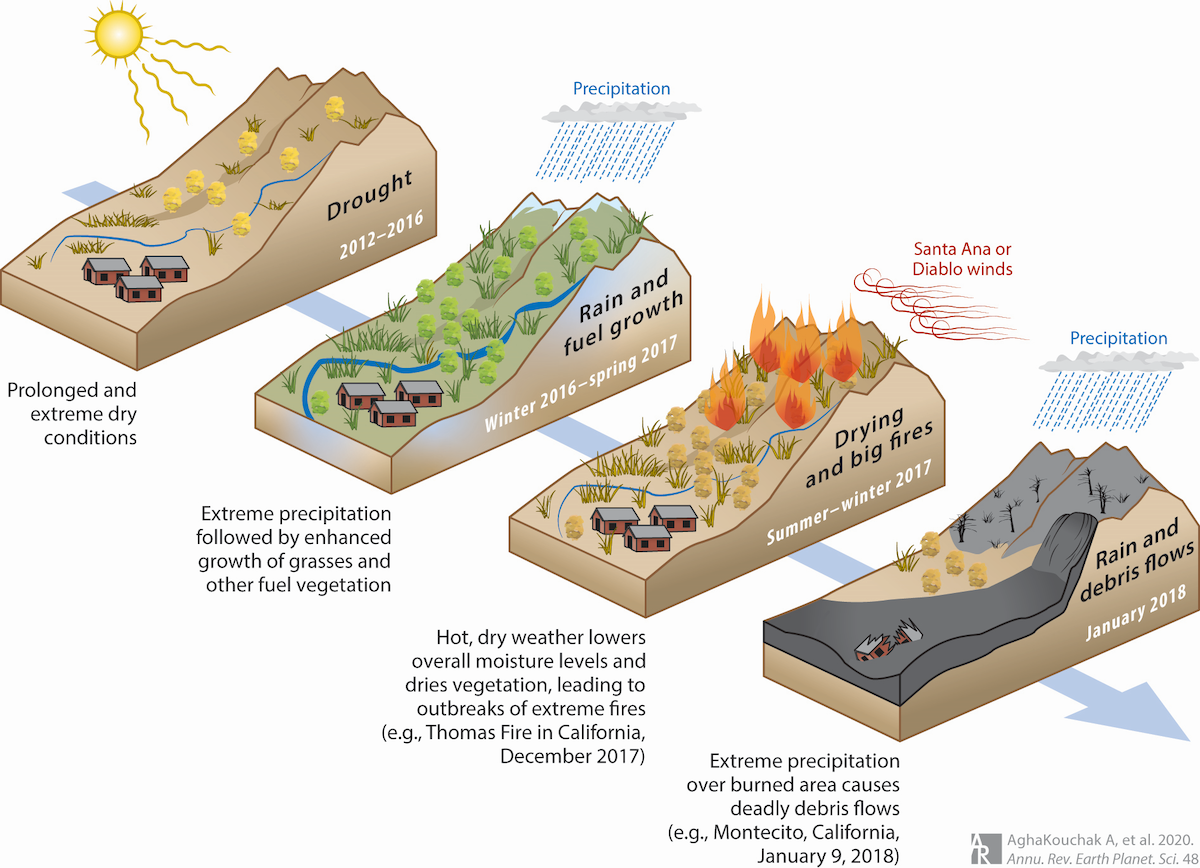 An example of the cascading effects of climate change for wildfires. AghaKouchak et al., Annual Review of Earth and Planetary Sciences, 2020

Cascading hazards are not limited to rain over burned areas. For example, soot and ash deposits on snowpack can increase snowmelt, change the timing of runoff and cause snow-driven flooding.

It’s also important to recognize that human activities and local infrastructure can affect extreme events. Urbanization and deforestation, for example, can intensify flooding and worsen mud or debris flow events and their impacts. That was evident in the videos of muddy water pouring through streets in Santa Barbara County on Jan. 9, 2023.

In a recent study, colleagues and I also looked at the risks to energy infrastructure from cascading disasters involving intense rain over burn areas, focusing on natural gas pipelines and other infrastructure. Our results showed that not only will natural gas infrastructure be increasingly exposed to individual hazards, creating the potential for fires, the chances of cascading hazards are expected to increase substantially in a warming climate.

About a year after the devastating Montecito mudslide in 2018, I visited a location where damage to a natural gas pipeline hit by the mudslide led to a fire that burned multiple homes. Looking upstream, I could see many hills next to one another with similar burned scars, slopes and vegetation cover. Each one can be the ground zero for the next human disaster.

Despite the high risk when extreme rainfall and droughts interact, most research in this area focuses on only rainfall or drought, but not both. Different government agencies oversee flood and drought monitoring, warning and management, even though both are extremes of the same hydrological cycle.

Recent disasters and research show a strong need to integrate management and risk reduction strategies of droughts and flood. Having one agency focus on one hazard can have unintended consequences for another hazard. For example, maximizing reservoir storage when expecting a drought can increase the flood risk.

Emergency response has improved since the 2018 Montecito disaster, but it’s clear that communities and government agencies still aren’t fully prepared for the scale and potential impacts of future events.