Yves here. We see the US and UK making broadly similar mistakes. Both adopted super low interest rates and persisted with them, when prior to the dot-bomb era, the Fed’s pattern had been to drop rates only for a quarter and then start moving them back up. QE among other things was a tool to extend central bank influence to longer maturities, although the device of focusing on quantities was bizarre. As Marshall Auerback and others pointed out, you can control prices and quantities, but not both. So it was never clear how much interest rate impact QE had.

Monetarism-fixated central bank orthodoxy has also not come to grips with the fact that interest rates are a blunt and asymmetrical tool. Putting money on sale does not do much to stimulate the economy. It gooses asset prices and benefits leveraged speculators, like private equity, real estate developers, and banks. But jacking up rates can and does constrain financial activity, since businesses plan assuming certain funding costs and increasing them can lead them to cut back. Rising interest rates also directly signals a bearish outlook, another reason for commercial interests to exercise caution.

And it goes without saying that central banks are not in a position to address the current inflation, which is driven primarily by energy and automobile prices. But if they crush demand, they’ll kill inflation…along with a hell of a lot of bystanders.

By Richard Murphy, a chartered accountant and a political economist. He has been described by the Guardian newspaper as an “anti-poverty campaigner and tax expert”. He is Professor of Practice in International Political Economy at City University, London and Director of Tax Research UK. He is a non-executive director of Cambridge Econometrics. He is a member of the Progressive Economy Forum. Originally published at Tax Research UK

The Office for Budget Responsibility published this commentary this week:

This needs to be out in the context of its borrowing forecasts made last October:

That also needs to be set in the context of a recent report from the New Economics Foundation that showed that quantitative easing has been funding government deficits whatever the Bank of England would like to claim: 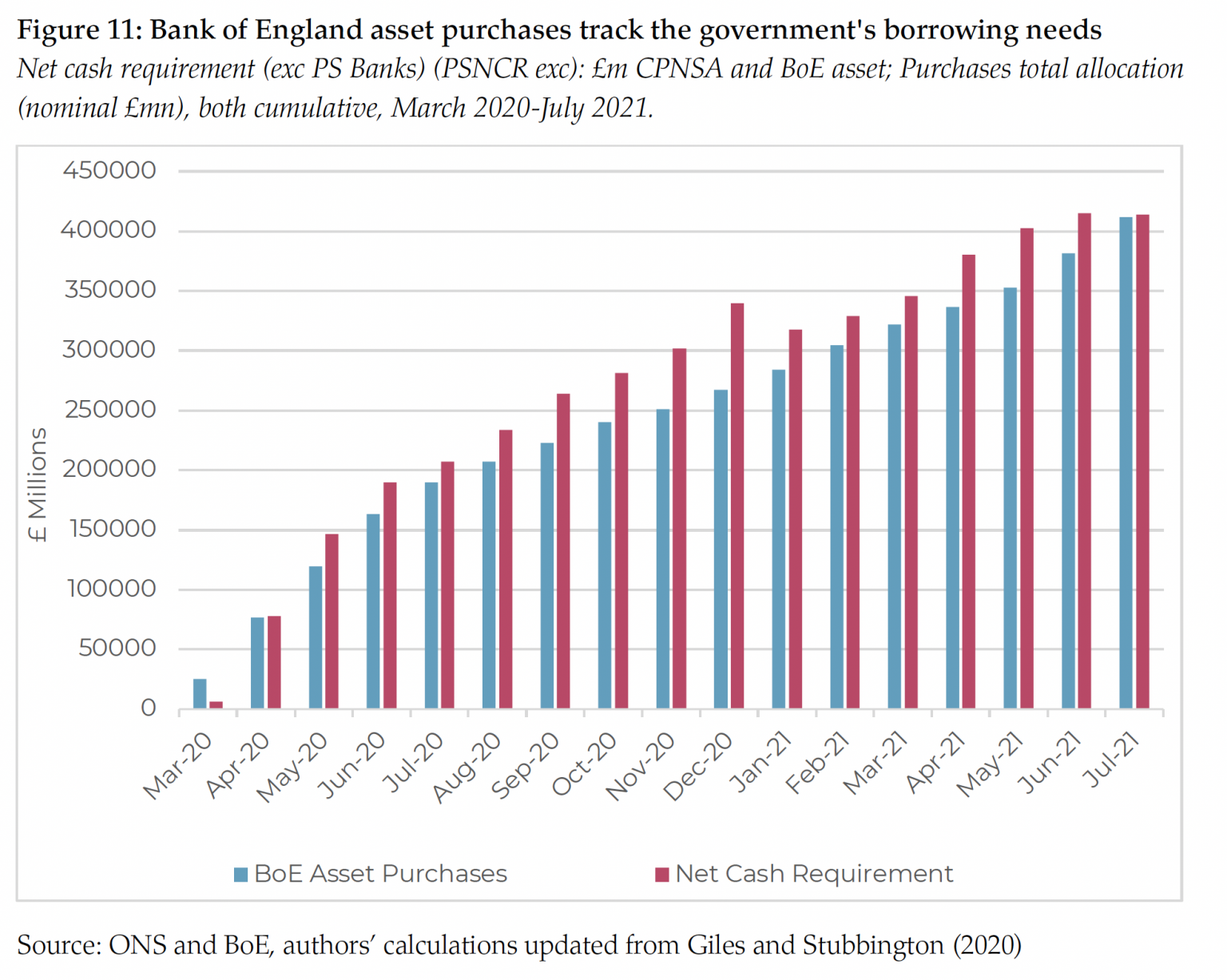 The QE programme has come to an end. The total government cash requirement is to be funded by financial markets. And, in addition, QE may begin to be unwound. This means that the Bank of England will not repurchase gilts when those it owns are redeemed. It owns 33% of all gilts right now.

What this means is, broadly speaking (and all the figures are estimates, so broadly speaking is good enough) that in 2022/23 the financial markets will have to fund £100 billion of gilt purchases and at the same time the Bank of England will withdraw over £35 million from that market. That means there will be a cash call on U.K. financial markets of around £140 billion when over the last two years there has been none, in effect.

This is a seismic change to funding. More than 6% of UK GDP is going to be required by government to be withdrawn from effective money supply. What are the consequences?

We can be sure that the policy is deliberately designed to push down government bond prices by increasing the number of gilts available to the market. The result will be increasing interest rates. That much is predictable.

It is also predictable that without a change in policy more than £100 billion is going to be withdrawn from financial markets over the following few years.

Apart from increasing interest rates no one can be sure what the consequence of this is. But, given that QE was always intended to push investor funds into riskier assets, and this has clearly happened, what we can reasonably expect is a reversal of this trend. There will be sales of riskier assets. In fact, those sales could be significant. The £140 billion required in the coming year has to come from somewhere within the financial system, and they do not create the money to fund this.

What this might mean is three things. First, there will be net selling markets in riskier assets.

Third, markets are valued at marginal prices, meaning that the overall sense of well-being amongst those with assets will fall.

Which assets are likely to fall in value? Gilts will, of course. But so too will shares. Corporate bonds will also fall as interest rates rose. And most likely house prices will too as the stimulus has also ended there.

Summarise this, and the massive reversal of economic policy that the end of QE, rising interest rates, and QE reversal simultaneously represent look likely to create  a significant fall in assets values, across the board in the UK, with the US looking likely to do much the same.

Corporate profits will fall as a result as pension deficits rise. Real investment will fall in the economy.

But what else happens? In effect, liquidity dries up. Because prices in markets are expected to fall no one wants to buy. So prices fall again. Or, alternatively, markets freeze. Both create chaotic situations. And given the intense financialisation of the UK economy, the result could be chaotic.

There could be banking crises, e.g. because of property price falls, or a stock exchange crash, or a loss of confidence simply leading to an economic downturn.

QE was done in the UK with the aim of inflating asset prices. That was always the wrong thing to do. There was always the better alternative of Green or People’s QE. But QE was done. And now the intention is to reverse it, rapidly. My point is a simple one. Bad as QE was, unwinding it rapidly could be worse and this government and the Bank of England seem unaware of that, which is really quite worrying.