For Naked Capitalism readers, the claim that “Covid is Airborne” (“Ten scientific reasons in support of airborne transmission of SARS-CoV-2“) is at the very least familiar, and for many (for example, me) is as true as any claim can be true[1].

In this post, I’m going to use the recent Gridiron Club superspreading event to show what our political class really thinks about airborne transmision (since the Gridiron Club is a fine sampling of the national political class. Spoiler alert: None of these people should be anywhere near policy). But first, I want to look briefly at Japan, so we can set a baseline by seeing what a society that takes airborne transmission seriously would look like (and what a political class that did its homework[2] would look like).

From the British Medical Journal (March 2022), “How Japan survived covid-19“:

Among the reasons cited are a public willingness to adhere to measures, as well as Japan’s early adoption of the “3Cs” (avoiding close contact, closed spaces, and close conversations)—built on the country’s traditional approach to infectious disease control—that anticipated what scientists now understand of the airborne nature of SARS-CoV-2 transmission.

In addition, facemasks were prevalent even before the pandemic, and most experts think a culture of politeness while travelling on public transport—such as distancing and a hesitancy to talk aloud on the phone—helped limit virus transmission, even as the country’s vast train and subway systems continued to be crowded during the peak hours. Japan’s low obesity rate has also been posited as a factor.

Here is a poster showing the 3Cs: 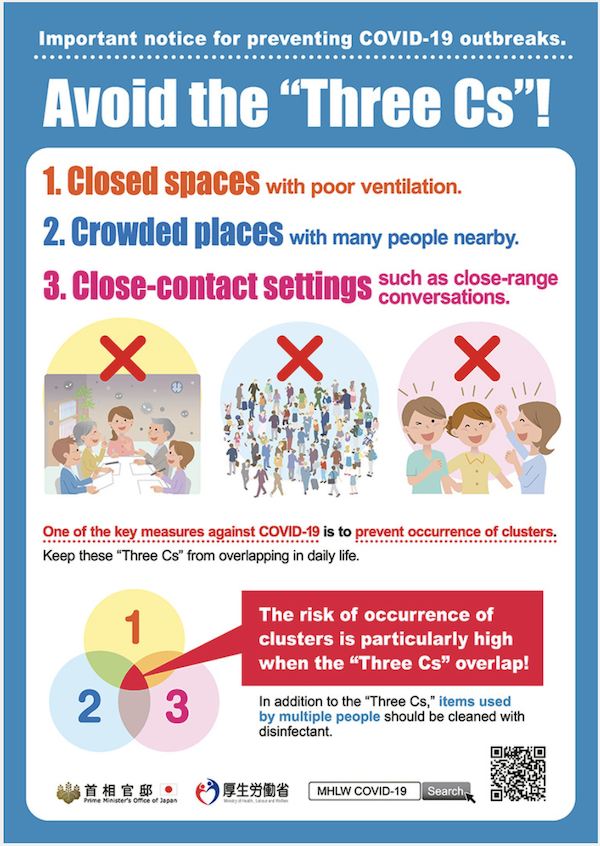 Readers will remember caes of superspreading events in the Skagit Valley Choir, a Guangzhou restaurant, and an Oslo nightclub on Christmas Eve. In all cases, the venues were 3Cs violators.

It’s worth taking a moment to understand why only the aerosol theory of transmission can give an accont of superspreading events. From CNN:

He describes this as respiratory backwash.

“Normally, that’s not a problem, right? We do this all the time. We’re always exchanging our respiratory microbiomes with each other.

As I have urged: Breathing is a social relation. Back to Allen:

But if someone’s sick and infectious … those aerosols can carry the virus. That’s a problem.”

Marina Jabsky, an industrial hygienist with the New York Committee for Occupational Safety and Health, explained how to think about it.

“If you’ve ever been in the same room as somebody who’s smoking, regardless of how far apart form them you’re standing, you’re gonna smell the smoke, right? Because the air particles will expand to fill the space,” Jabsky said.

That’s why only aerosol tranmission can give an account of superspreading events like that at the Gridiron Club, to which we now turn.

The Debacle at the Gridiron Club

The Gridiron Club is “the oldest and among the most prestigious journalistic organizations…. Its 65 active members represent major newspapers, news services, news magazines, and broadcast networks. Membership is by invitation only and was historically almost exclusive to prominent newspaper men, including newspaper Washington bureau chiefs.” They hold an annual soirée, where the invited are chosen from the “A-List” of the political class, including many Administration officials. Comedic sketches about life in the political class are prepared and performed. From the Post:

The hours-long dinner, which featured lighthearted speeches and political skits performed by journalists, including one with performers dressed as the coronavirus.

The last two Gridiron shingdigs were cancelled due to the pandemic, so a return to “normalcy” this year was a big thing for them, as it indeed turned out to be: Of the approximately 630 attendees, 72 (as of this writing) caught Covid. 11%. That’s impressive.

First, we’ll look at the Gridiron Superspreading Events from the perspective of the 3Cs and aerosol transmission generally, Then, we’ll look at the question of “personal risk. Finally, we’ll ask the sort of questions a sociologist might ask.

First, the Gridiron was clearly a Closed space, a Crowded place, and a Close contact setting. In addtion, attendees were also singing, known to increase risk (as from the Skagit Valley choir). From Politico:

Eating, talking loudly and even singing indoors have proven to greatly increase the risk of viral spread during the pandemic. At the Gridiron dinner, attendees sat together in close proximity for hours, eating, drinking, talking over each other — even joining hands at the end to sing “Auld Lang Syne.”

That scenario means infected individuals were “releasing lots of virus into the air,” said Marr. “And … given that we’ve seen a lot of cases out of here, it’s likely the ventilation was not sufficient.”

About half of the cases appeared to have been clustered at three tables [the Washington Renaissance Hotel] said, and the club was taking steps to notify anyone who sat next to or across from the infected guests.

This reminds me strongly of the Korean restaurant study where airflow from ceiling airconditioners blew the virus from the index case to three other cases at a 6.5 meter distance. So I would want to understand the airflow round those three tables. (It’s possibile one of the masked servers could be at fault, of course. I would want to understand how servers were shuffled between tables. And surely they were tested as well.)

Third, attendees did not mitigate 3C risks by masking. From WaPo:

The dinner was supposed to reflect a return to normalcy after being canceled the past two years because of the pandemic. Few guests wore masks or observed social distancing, according to people in attendance. Only the serving staff was consistently masked throughout the evening. While organizers asked attendees to show their vaccination cards at the door, there was no requirement to be tested.

Fourth, attendees were not required to show a negative test:

A-list guests were asked to show proof of vaccination but not negative tests.

Administration officials and many experts have said that, more than two years into the pandemic, individuals now have the tools they need to decide what level of risk they’re willing to tolerate — and that every social interaction, large or small, comes with a nonzero risk of covid-19 and other respiratory illnesses.

Fauci, who said he has not tested positive [was he tested?], said he abided by CDC guidelines when deciding to attend the dinner. He said he made a personal decision that the risk of attending was low for three reasons: He is vaccinated and boosted…

Neither vaccination nor boosting prevents transmission, so if the goal is to avoid a superspreading event, Fauci’s risk calculation is already worthless.

Ditto. And Fauci didn’t even ask if there was a requirement to test negative?

…and D.C. is classified as having a low burden of disease by the CDC’s metrics. That classification also means individuals can go unmasked in indoor settings.

This is idiotic (and shows how CDC’s metrics encourage people to be idiots, assuming Fauci believes this stuff). You don’t get infected in a county; you get infected in a venue. I would bet money the CO2 level in that room was high (which means that people are breathing each other’s air, hence the superspreading event). I would bet further that none of the attendees, includiing Fauci and Walensky, even know what a CO2 monitor is, or that it’s a good proxy for shared air (you exhale CO2, hopefully not with the virus, but maybe so). These people aren’t competent to judge their own risks, let alone impose their views on others.

And speaking of risks, there’s always the question of how to account for the presence of sociopaths:

So @NYCMayor was at the Gridiron dinner, a superspreader w/ 67 cases and ⬆️

He knew his was exposed, but he attended the @ReelAbilities Film Fest maskless, exposing hundreds of vulnerable people with disabilities.

Finally, let’s consider the Gridiron Superspreading Event as a sociologist might, and ask a few questions.

First, how many of the masked servers caught Covid?

Does anyone know if there is any data on how many people working the Gridiron event (ie, servers, custodial staff, security, etc) have COVID now? How many of their family members? How many coworkers not at the event but worked next to someone who didn’t yet know they had covid?

Second, who was the index case?

Third, will an epidemiological study be made?

Will there be a CDC epi investigation of the Gridiron outbreak? After all guest list and those who worked the event was fixed — this makes some aspects of it easier (and can yield good information). Plus, CDC director was there as well.

Since both Fauci and Walensky were present, I have to think that they both regard the Gridiron Club’s arrangements as a paradigm for “normalcy.” Vax-only is the strategy — the political class seems to believe either that vaccination prevents transmission, or that tranmission is not important without hospitalization[3]– and non-pharmaceutical interventions like masks are to be ruthlessly discarded or ignored (as with Japan’s successful 3Cs model or ventilation generally). Finally, for all the foo-fra about personal risk, Fauci’s own assessment of his personal risk is sloppy and deluded. Neither Fauci nor Walensky should be within a mile of public health policy, and yet they’re running the show. It’s passing strange.

[1] Here is are two articles on why WHO and CDC took so long to use the word “airborne” (Nature; Time). Both are good but much too charitable.

[2] Assuming them not to be sociopathic and democidal, a decreasingly tenable position.

[3] An idea so sociopathic I find it hard to get my mind around it.