Yves here. People are skilled at making themselves and others miserable and now at wrecking the planet. We do get some of what we consider good art, but is it worth it? E.O. Wilson attributed a lot of human planetary destructiveness to our being meat-eating primates. But could our intellects be the real problem?

Where we are may illustrate Dollo’s Theory of Evolution. This is made up, a device at the start of a novel that I barely got into as a house guest, and I don’t recall the name of the book or the author. Nevertheless, Dollo posited that species developed characteristics that gave them competitive advantage. So far, so goo.

But Dollo went further and claimed species continued to develop those qualities beyond the point of maximum advantage. Saber-toothed tigers had massive teeth and jaws that enabled them to kill prey like mastadons. But when they died out due to their predation and other factors, their dental equipment was ill adapted to smaller prey, so they went hungry. Dinosaurs got so big that pretty much nothing could kill them. But they also outgrew their ability to manage their bulk. They developed second brains in their stomachs to cope and died of anatomical schizophrenia.

By Rachel Nuwer, a science journalist whose writing has appeared in The New York Times, National Geographic, Scientific American, BBC Future, and elsewhere. She is the author of “Poached: Inside the Dark World of Wildlife Trafficking.” Originally published at Undark

The German philosopher Friedrich Wilhelm Nietzsche was, by all accounts, a miserable human being. He famously sought meaning through suffering, which he experienced in ample amounts throughout his life. Nietzsche struggled with depression, suicidal ideation, and hallucinations, and when he was 44 — around the height of his philosophical output — he suffered a nervous breakdown. He was committed to a mental hospital and never recovered.

Although Nietzsche himself hated fascism and anti-Semitism, his right-wing sister reframed her brother’s philosophy after his death in 1900 as a rationale for subjugation of people that the fascists saw as weak, contributing to the moral bedrock of the Nazi Party and justification for the Holocaust. 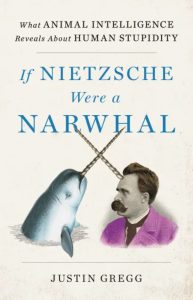 Would Nietzsche have been happier — and would the world overall have been a better place — had the philosopher been born some other species other than human? On its face, it sounds like an absurd question. But in “If Nietzsche Were a Narwhal: What Animal Intelligence Reveals About Human Stupidity,” scientist Justin Gregg convincingly argues that the answer is yes — and not only for Nietzsche, but for all of us. “Human cognition and animal cognition are not all that different, but where human cognition is more complex, it does not always produce a better outcome,” Gregg writes. Animals are doing just fine without it, and, as the book jacket says, “miraculously, their success arrives without the added baggage of destroying themselves and the planet in the process.”

Gregg — who holds a doctorate from Trinity College Dublin’s School of Psychology, teaches at St. Francis Xavier University, and has conducted research on dolphin social cognition — acknowledges that human history is marked by incredible breakthroughs that hinge on our intelligence. Yet, nonhuman animals do not need human-level intelligence to survive and be evolutionary successful, as Gregg points out, which is why this trait isn’t more prevalent across species.

He builds his often hilarious, sometimes unsettling, case against human superiority across seven chapters. Each one deals with a unique aspect of our psyches — from our capacity to conceive of our own mortality to our ability to communicate about “a limitless array of subject matter” — and provides ample evidence showing that not only are these mental attributes unnecessary for survival, they’re oftentimes more a liability than a gift.

Our species stands out first and foremost, Gregg begins, for our tendency to ask “Why?” “Of all the things that fall under the glittery umbrella of human intelligence, our understanding of cause and effect is the source from which everything else springs,” Gregg writes. “Why” questions arguably spurred innovations such as agriculture (“What causes seeds to germinate?”), fields of study such as astronomy (“Why is that star always in the same place each spring?”) and the advent of religion and philosophy (“Why am I here? And why do I have to die?”).

Asking “why,” however, is not necessary for success on either an individual or evolutionary scale, Gregg writes. Other species presumably flourish without it, and many have arrived at similar life hacks as humans, but without seeking a deep understanding of causation. Chimpanzees, birds, and elephants know how to self-medicate with plants, clay, and bark, for example. They do not need to know why these remedies work, Gregg writes, only that they do.

For all the good asking “why?” has done us, Gregg argues, it has also had negative repercussions, by justifying biases such as racism (“Why do humans from different parts of the world look different?”) and, as he writes, by leading us to create technologies that can threaten to destroy us — internal combustion engines, for example. The solution to climate change and other existential threats that we’ve created for ourselves, Gregg points out, will come from the same why-based system of thought that brought about these problems in the first place. However, “it is an open question whether a solution will arrive in time, or if our why specialist nature has doomed us all,” he writes.

Our obsession with morals — “not just that we should behave a certain way, but why we should,” as Gregg puts it — has also generated untold amounts of suffering. Norms that dictate how one should and should not behave within one’s social world exist throughout the animal kingdom. Chickens have pecking orders, for example, but they do not ruminate on whether that system is fair or just, Gregg points out. On the other hand, some species do have sensitivity to social inequity. In one famous experiment, scientists offered Lance and Winter, two capuchin monkeys in side-by-side cages, different rewards for completing the same task. Winter received a grape (a preferred treat), and Lance received a slice of cucumber. As Gregg recounts it, when Lance saw Winter repeatedly receive a grape for the task, she violently threw the cucumber back at the researchers and banged on her cage. “This is evidence that Lance felt as if it was unfair that she was given the lesser food reward for the same task,” Gregg writes. “Lance was responding to the violation of a fairness norm.”

But humans take such social norms to an extreme, Gregg argues. We attempt to enforce universal standards for “right” and “wrong” and spin up elaborate justifications, monitoring systems, and punishments to ensure that others follow those made-up rules. A major problem with morals, however, is that they are subjective and can easily lead to justification for one demographic or cultural group’s oppression of another. From 1883 to 1996, Gregg writes, 150,000 First Nations children in Canada were forcibly removed from their homes and sent to residential schools, where they were subjected to abuse, trauma, cultural genocide and even death. The prime minister under which the atrocities began viewed forced assimilation as a “moral imperative, the best solution for bringing Indigenous children in line with modern Western values,” Gregg writes.

Moral grounds have been used to condone the persecution of minority groups; rationalize genocide; and to advocate for eradication of entire cities, including by dropping nuclear bombs: “The history of our species is the story of the moral justification of violent acts resulting in the pain, suffering, and deaths for billions of our fellow humans who fall into the category of ‘other.’” This stands in contrast to every other species, Gregg continues, which lack “the cognitive capacity to systematically kill entire subgroups of their same-species populations resulting from a formal claim to moral authority.”

Humans, therefore, might be succeeding not because of, but in spite of, our moral aptitude, he writes, having taken the social norms that govern and constrain social behavior in most species to self-destructive lengths.

But the most damning chapter of the book — and my favorite — concerns a special brand of cognitive dissonance Gregg calls prognostic myopia, or “the human capacity to think about and alter the future coupled with an inability to actually care all that much about what happens in the future.” This happens on an individual level all the time. Prognostic myopia is at play, for example, when you decide to stay up late drinking with friends, knowing you have to be up early the next morning. The consequences of that decision only fully hit the next morning, when the alarm goes off and the hangover begins. This is because our brains, like those of other animals, are wired to deal primarily with the here and now.

The real problem, however, is that unlike other species, “our decisions can generate technologies that will have harmful impacts on the world for generations to come,” Gregg writes. Spread across billions of people and coupled with modern technologies, our tendency to live in the moment today is condemning future generations and the world at large to increasingly dire prospects with each passing year. According to the Global Challenges Foundation, as of 2016, there was a 9.5 percent chancethat humans will go extinct within the next 100 years. And even if we do survive, we’re looking at a potential warming of 2.7 degrees Celsius by 2100, on a scale that “will render most of the planet uninhabitable,” Gregg maintains. Yet we seem to lack the political will to stop this from happening, he adds, because “the further into the future we go, the less we care.”

As Gregg points out, “It is the greatest of paradoxes that we should have an exceptional mind that seems hell-bent on destroying itself.”

Yet evolutionarily speaking, our slide toward extinction isn’t outside the norm. Countless species have come and gone since life began on the planet some 3.7 billion years ago. As Gregg writes, “Our many intellectual accomplishments are currently on track to produce our own extinction, which is exactly how evolution gets rid of adaptations that suck.”