Yves here. I’m old enough to have heard of the regulatory fights over DDT in real time, although not old enough to have grasped the details. But in 1963, CBS broadcast a documentary on Silent Spring which even I recall as having galvanized discussion. Plus recognition of the controversy by one of the three networks was tantamount to an authoritative endorsement of Rachel Carson’s concerns.

By Andru Okun, a writer living in New Orleans. Originally published at Undark

In 1945, Rachel Carson, then a marine biologist for the U.S. Fish and Wildlife Service, developed an interest in DDT, a powerful pesticide used to eliminate insects that destroy crops and carry disease. A decade and a half later, “Silent Spring” was released, a book in which she argued that synthetic chemicals like DDT were also killing birds and fish, entering into the food chain, and contaminating the natural world. Her work, both celebrated and scorned, gave rise to a budding environmental movement and forever altered public perception of DDT.

In “How to Sell a Poison: The Rise, Fall, and Toxic Return of DDT,”medical historian Elena Conis provides an updated account of the infamous pesticide. She foregrounds lesser-known figures embroiled in the chemical’s history, telling of the small farmers, medical professionals, and nature enthusiasts who raised concerns about DDT long before it became a catalyst for environmental activism in the 1960s.

Like many stories of American innovation in the second half of the 20th century, DDT’s ascent can be traced to World War II, when it was successfully used to combat malaria-infected mosquitoes in the South Pacific. In peacetime, the production and application of DDT continued. Plywood and wallpaper were coated with DDT in suburban homes. Farmers applied it to cows and crops. Trucks drove around cities spraying it to ward off insects. Conis points out that the chemical was of such little concern at the time that children would play in its mist. “In just a few short years, the pesticide — a relatively simple compound of carbon, hydrogen, and chlorine, used with abandon — had come to symbolize our postwar nation’s capacity to vanquish age-old scourges with modern science and technology,” she writes. 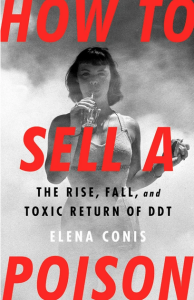 But DDT’s status as a miracle chemical wouldn’t last. When it became a part of everyday American life, there was still little understanding of how it worked. (In fact, the chemist who originally convinced the U.S. government to deploy the pesticide did so by eating a chunk of it in front of the surgeon general.) Later, scientists would discover DDT was a neurotoxin that accumulated in body fat. By then, the chemical could be found in the bloodstream of nearly every American. When Marjorie Spock, an environmental activist and gardener in Long Island, New York, sued the government in 1957 over its spraying of DDT, the defense admitted the pesticide was pervasive while claiming there was no evidence this resulted in any harm to people. And while DDT indiscriminately wiped out wildlife rather than just troublesome insects, the defense claimed these populations bounced back. Those opposed to the use of the DDT, they argued, were simply opponents of scientific progress.

Conis describes how a decade before this courtroom battle, a mysterious disease spread around the country, causing lesions in the skin of grazing cattle and impairing their muscular coordination. People living far from agricultural sectors fell ill, too. Although the disease was thought to have originated in Texas, Morton Biskind, a Manhattan-based physician, began to notice an uptick in patients with unusual symptoms. Further research led him to the determination that his patients’ ailments could all be linked to the chemical. He went on to write a report in 1949 connecting the strange nationwide illness to the widespread use of DDT, writing, “To anyone with even a rudimentary knowledge of toxicology, it exceeds all limits of credibility that a compound lethal for insects, fish, birds, chickens, rats, cattle, and monkey would be nontoxic for human beings.”

Biskind’s revelations pointed to a serious problem: People were consuming the chemical in their food. Even before it became a commonly used insecticide, FDA scientists knew that cows treated with DDT would produce milk and meat laced with the chemical. Still, it was used liberally within agriculture, as were hundreds of other new chemical insecticides made available following the war.

Conis carefully details how public concern over the safety of synthetic chemicals developed in the early 1950s, during which a government task force began to look into the toxicity of the nation’s food supply.

Meanwhile, chemical corporations banded together to create a public relations campaign affirming the necessity and safety of pesticides like DDT. By the middle of the decade, hundreds of millions of pounds of synthetic pesticides were annually produced, sprayed on vast tracts of American farmland. “The U.S. was also applying pesticides abroad, too,” Conis writes, “its DDT the cornerstone of the World Health Organization’s malaria-eradication campaign. Pesticides had never been produced or used on such a scale.”

Social inequality and environmental pollution are often intertwined, a fact Conis draws attention to throughout her book. She recounts how California farm laborers were made sick by the uncontrolled use of pesticides and how the fish in a creek that ran near a predominantly Black Alabama town were contaminated. She also writes about the scary tendency for DDT to impact women and their children, as exposure to the pesticide can occur through breastfeeding as well as in-utero.

Big tobacco becomes a major piece of the story halfway through the book. In 1964, a landmark surgeon general report determined that smoking significantly increased a person’s risk of lung cancer and death. Tobacco’s relationship with DDT stretched back to the 1940s when the chemical was sprayed on fields and in warehouses where tobacco was stored. It was in both cigarettes and their smoke. Thus, the tobacco industry came up with a plan: Blame cancer on the pesticide and then commit to discontinuing its use.

Decades later, in the 1990s, the industry’s stance on the pesticide reversed, spurring the resurgence of DDT. The latter portion of Conis’s narrative tracks how free-market defenders funded by anti-regulatory chemical and tobacco companies used the demonization of DDT to divide environmental scientists and public health experts over the use of pesticides. As the spread of malaria increased throughout the globe, corporate money was funneled into a campaign that denounced the ban of DDT and blamed millions of malaria-induced deaths on overzealous environmentalists.

Conis explains how this campaign served to divert attention away from tobacco’s harm by focusing on a larger threat while also throwing into question global health strategy led by Western nations. Media manipulation, denial, and distraction were crucial to the strategy, the primary goal being the protection of industry. Conis posits that this campaign — what she refers to as “corporate doubt mongering” — helped lay the groundwork for the amplification of scientific uncertainty seen today regarding issues like climate change and vaccines.

The Environmental Protection Agency banned DDT for most uses in 1972. Once acclaimed for its efficacy and low cost, the chemical’s legacy is marked by its heavy toll. While it has been difficult for scientists to conclusively link the chemical to adverse health outcomes for people, researchers have labeled the pesticide a probable carcinogen and highlighted its connection to a variety of cancers. The chemical has also proven to be astoundingly persistent, appearing as far afield as Antarctica, where the pesticide has never been sprayed.

Conis is a sharp writer, albeit more of a historian than a political analyst. While “How to Sell a Poison” includes exhaustive research and vivid storytelling, Conis’s personal take is mostly limited to the book’s beginning and end. Interludes between its three acts would have allowed her to better connect her history to current events, delving further into some of the book’s larger themes while also providing a brief pause in what is an undeniably rigorous history. Still, the overarching message is easily understood: “Seventy-five years after scientists first warned of its hazards, 60 years after Rachel Carson wrote ‘Silent Spring,’ and 50 years after it was banned, DDT is still here.”