Yves here. This post reproduced below strikes me as more than a little weird. I hope those who have a better grasp of the French Revolution and the post revolutionary-period than my now-not-entirely-reliable-memories from having studied that era in college, can comment and likely make corrections.

This post gives very peculiar impression that state building in post-revolutionary France was a bottom-up process, and depended on the building up of coercive power at the département level. It completely ignores that a, if not the, major source of funding for France in the early decades after 1790 was seizure of Catholic Church property and its sources of income. Talleyrand, then Bishop of Autun, read out the decree announcing the land grab. He was excommunicated. But clerics were put the state’s payroll.

Land reform played a significant role in growth. The areas that had more Church land to sell to private concerns showed higher growth through until the effects of the productivity gains leveled off. From the Journal of Law and Economics in 2021:

This study exploits the confiscation and auctioning off of Catholic Church property that occurred during the French Revolution to assess the role played by transaction costs in delaying the reallocation of property rights in the aftermath of fundamental institutional reform. French districts with a greater proportion of land redistributed during the Revolution experienced higher levels of agricultural productivity in 1841 and 1852, more investment in irrigation, and more efficient land use. We trace these increases in productivity to an increase in land inequality associated with the Revolution-era auction process. We also show how the benefits associated with the head start given to districts with more church land initially, and thus greater land redistribution by auction during the Revolution, dissipated over the course of the 19th century as other districts gradually overcame the transaction costs associated with reallocating feudal system property rights.

I also wonder how Napoleon raised and funded his armies when the départements are presented as not always fully functioning government entities as of then. The piece does make a passing reference to capitals paying higher conscription levies.

Effective states can raise taxes and armies, enforce laws, and produce public goods, but how these functions are built over time is not well understood. This column studies the administrative reform initiated by the French Revolution, one of history’s most ambitious state-building experiments, to shed light on the sequence of steps needed to build effective states. Cities chosen as local administrative centres initially invested in the state’s capacity to extract resources from citizens. These cities may not have grown in the short run, but the investments eventually delivered payoffs in terms of public goods, which stimulated long-run growth.

State capacity is essential for economic development (Besley and Persson 2011, Besley et al. 2021). However, this fundamental insight of political economy involves a paradox: strong states have a unique ability to coerce their population and to collect taxes from citizens, which can also undermine economic growth. In the worst-case scenario, the coercive apparatus of the state can fall into the hands of corrupt elites and threaten the existence of markets and democracy.

Using evidence from Colombia, Acemoglu et al. (2016) warn us of the dangers of putting military objectives above all others in weak-state settings. At the same time, if the state fails to enforce law and order, other actors might step in to create sophisticated administrations in its place (Sanchez de la Sierra 2017, 2020). Historical examples illustrate the importance of early investments in coercive capacity. The young Roman Republic raised large numbers of conscripts to ensure its survival and expansion. In Ming dynasty China, a substantial share of the population belonged to ‘military households’ required to supply soldiers to the state. Recent work in low-income settings has focused on helping weak states develop fiscal capacity.

Across the board, the ability of states to raise taxes and defend their borders seems essential to their long-term success. Yet, policymakers often grapple with the problem of how to trigger the complex process of building the different functions of the state.

In our recent paper (Chambru et al. 2021), we exploit one of history’s most ambitious state-building experiments, the administrative reform initiated by the French Revolution, to shed light on the sequence of steps needed to build effective states. In February 1790, France’s Constituent Assembly overhauled the administration of the kingdom. In response to widespread grievances about administrative complexity, the Assembly established new centres to concentrate local administrative functions. The main achievement of the 1790 reform was to divide the territory into 83 homogeneous units known as départements. Citizens would never be more than a day of travel away from the nearest local capital, where all administrative services would be available. This state-building enterprise, solidified after 1800 by Napoleon, has largely survived to the present day.

One original feature of the reform allows us to establish a causal link between the reallocation of administrative presence across space and subsequent economic outcomes. Facing pressure from local representatives, in about a third of French departments, the Assembly did not determine which city should become the new local capital. Instead, it decided that the capital would rotate across multiple cities.

Unsurprisingly, this compromise solution was not viable, and French parliamentarians soon began to call these ‘wandering administrations’ a ‘ridiculous and expensive’ solution. In September 1791, the Assembly abolished rotations and ordered the local administration to remain where it was. We show that this generated exogenous variation in the allocation of capital status, and we use this setting to compare the cities that were ultimately chosen (capital cities) to the ones that were initially considered (other candidate cities).

Despite having similar economic potential before the Revolution, capitals diverged dramatically from other candidate cities over the long run. By the end of the 19th century, the population of capitals was 40% larger than that of comparable candidate cities. Civil servants and their families accounted for about a third of this difference. This demographic divergence, which continued in the 20th century, is consistent with a large literature showing that public investments and market agglomeration forces promote economic growth around centres of administrative power.

What happened in the immediate aftermath of the reform, however, is equally intriguing. In the short run, capitals did not grow faster than comparable candidate cities. Instead, the capitals concentrated investments in coercive capacity, which enabled France to fund and fight a series of external wars. By 1815, France’s new local capitals and their periphery were substantially more likely to have established their cadastre, a type of land-registration system aiming to facilitate land taxation. Moreover, capitals also paid a heavier tribute to military conscription in Napoleon’s armies after 1802.

We represent the dynamic evolution of population in Figure 1, where we plot the causal effect of the administrative reform on the population of capitals over time. Two striking facts emerge. First, the ‘winners’ of the administrative reform – the cities chosen as capitals – diverge markedly from competing cities in the long run. Second, this effect only materialises after several decades. We view this initial phase as the period during which investments are made to build the extractive capacity of the state. Only later does this increased capacity translate into a higher provision of public goods. 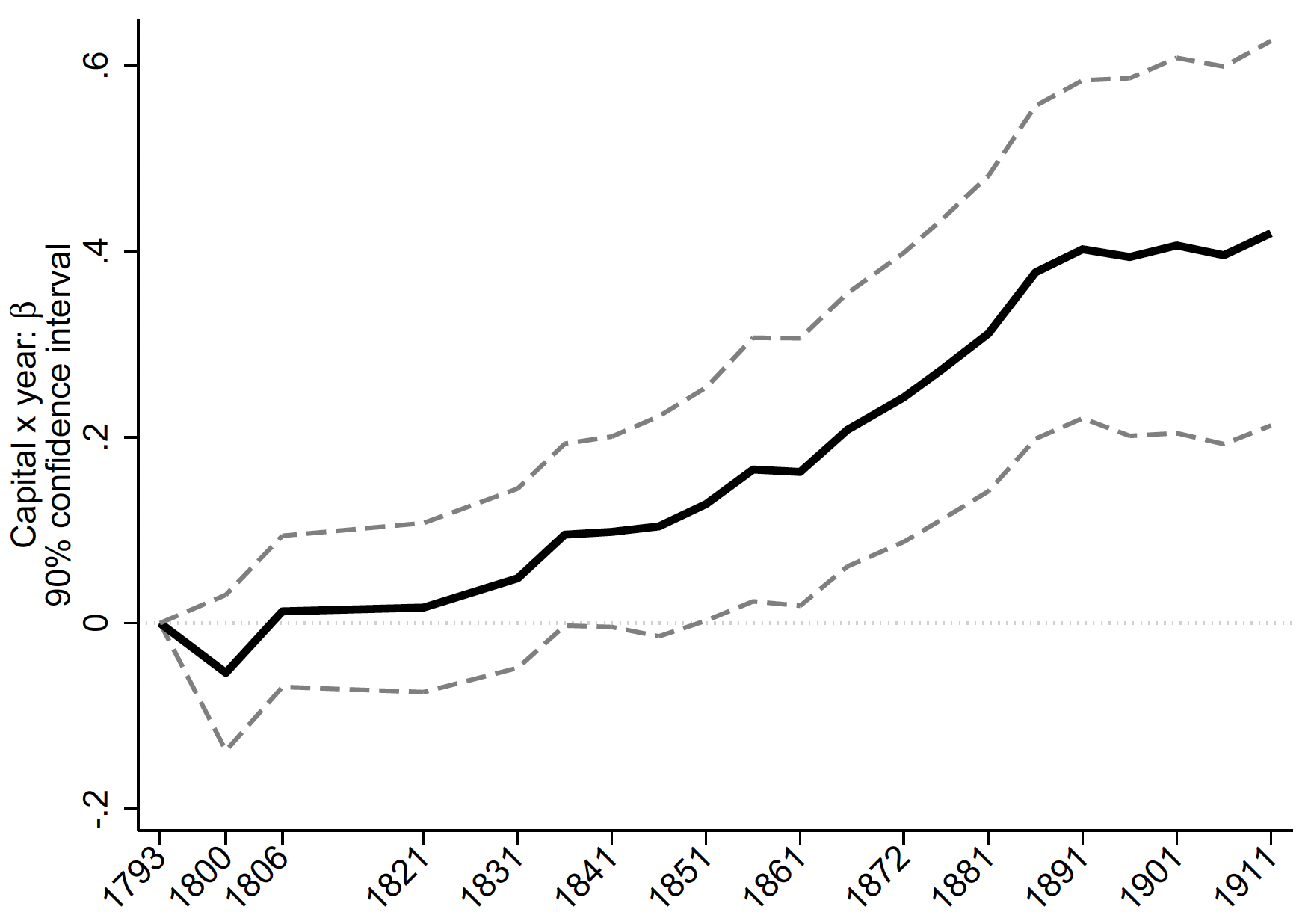 Figure 2 illustrates the successive steps of state-building, which can explain the long-term success of capitals and their periphery. Panel (a) shows the dynamic build-up of extractive capacity: capital cities establish their cadastre before other candidate cities. Panel (b) shows capitals investing in enforcement capacity, in the form of tribunals and prisons. Investments in the coercive capacity of the local administration might have made capitals less attractive for firms and citizens initially. Over time, however, these investments allow the local state to deliver local public goods. Panel (c) shows that capital cities obtain a railway station earlier than other candidate cities. 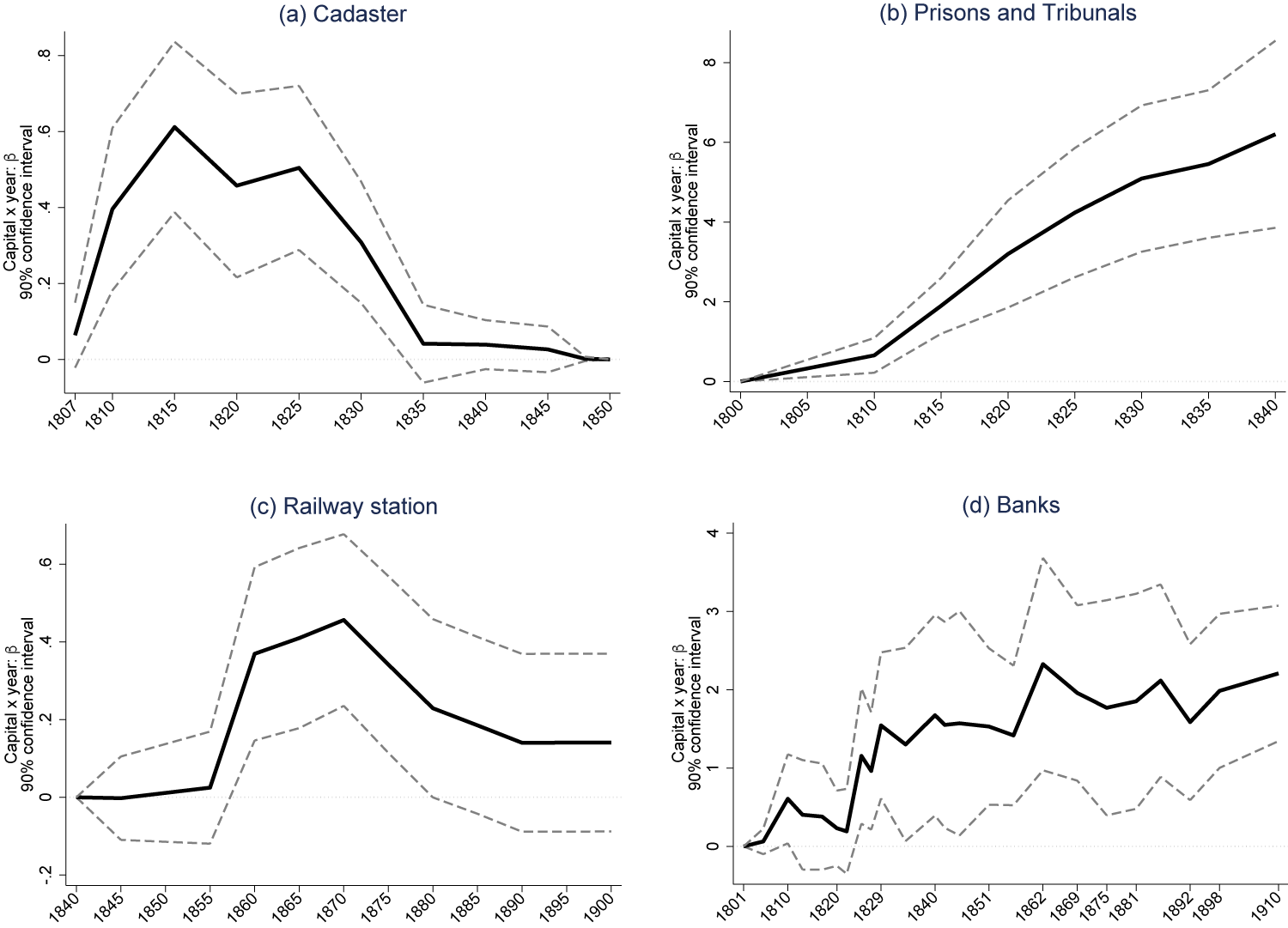 Eventually, these investments in public goods and infrastructure stimulate private sector growth, as shown in panel (d), where we look at the number of local banks. We observe a similar pattern for other economic outcomes, such as innovation. In the late 19th century and the 20th century, the capitals and their periphery have grown faster in economic and demographic terms: the dynamic process of state-building paid off.

France’s state-building experiment illustrates that it takes time and patience for effective states to rise. Early investments in the state’s ability to extract resources require upfront efforts that may be costly for the local population. The dividends from such investments, while substantial in the long term, may not become apparent for several decades. These delayed benefits make the task of building effective states, which remains a key issue in many parts of the world, all the more challenging.