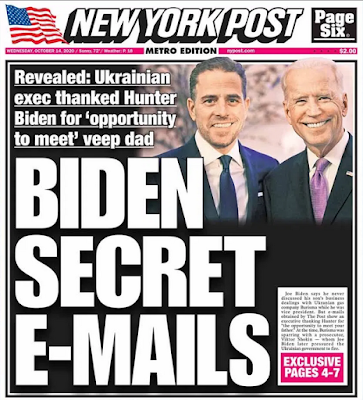 The story that started the latest round of madness

If you’re confused by the welter of reports around the Hunter Biden-purloined laptop story, don’t be embarrassed. The reporting is not just confusing, but confusingly told. Even if we divide the story into its two major parts — what the Post printed; what Facebook and Twitter did about it — and analyze them separately, things don’t become more clear. Large sections of each side’s version of each side of the story overlap in confusing and unremarked-on ways.

In brief, here’s what happened as Matt Taibbi describes it:

The “blockbuster” had a controversial provenance. A computer repair shop in Delaware reportedly came to possess a laptop belonging to the younger Biden. According to the Post, it contained a treasure trove of Republican oppo, including videos of the younger Biden smoking crack and having sex, and emails from a Ukrainian businessman pleading with Hunter to use connections to help the corrupt energy firm Burisma escape a shakedown.

Later, the Burisma exec appeared to thank the younger Biden for an introduction to his father. The Post strongly suggested that these emails, in conjunction with the well-known tale of Joe Biden demanding the ouster of then-General Prosecutor Viktor Shokin, represented a misuse of influence.

Soon after the story was published, we were hit with a stunner: two major tech platforms, Twitter and Facebook, took third-world style steps to limit the distribution of the story. Facebook announced that it was slowing the article’s spread on its news feed via a tweet from Andy Stone, a Facebook employee whose previous jobs included handling communications for the Democratic Congressional Campaign Committee and for Democratic Senator Barbara Boxer […].

That presents the two major pieces: the story in the Post, and the censorship of the story by two social media giants. Most non-right-wing writers, worried about appearing to attack Joe Biden in the run-up to the Most Important Election Ever (and who knows, maybe it is), have focused either on the censorship side of the story, or attributed the Post-published elements — the laptop and what it purports to contain — to Russian interference. (No one in the Biden camp has declared the released emails to be false, for what that’s worth.)

But even focusing alone on the censorship side of the story produces confusion. Is what Facebook and Twitter did actual censorship, a traditionally bad thing in the liberal world? Or were they instead refusing to comply with “Russian interference in our election,” something called an act of war not too long ago, thus giving their silence resistance-hero status? Even liberal opinion is divided on that one.

But let’s look at the story itself, again through Matt Taibbi’s eyes. (Part of this comes from the piece linked above and part comes from a longer, subscriber-only version of the same piece.)

As Taibbi points out, of those outlets that did cover the underlying story — the supposedly stolen laptop, the supposedly copied drive, the photos and emails it supposedly contained — mostly reported only on its electoral effect and not on the truth or falsity of its allegations.

Even those who did report on the relations between the Bidens and Burisma did so in a binary, an on-off yes-or-no, way:

The actual tale may be much more complex and interesting. Here’s how Taibbi, who, we must remember, spent many years in Russia and “knows their ways,” seems to have pieced it together.

After a long description (well worth reading) of various machinations by Burisma’s founder, a corrupt, former public official named Mykola Zlochevsky and a benefactor during the regime of ousted Ukrainian president Viktor Yanukovich, Taibbi writes this:

To recap: an oligarch [Zlochevsky] whose company’s wealth was tied to embezzlement and graft was booted from power via revolution in February, 2014, causing his company’s assets to come under fire, both in Ukraine and abroad. With Zlochevsky’s former protector Viktor Yanukovich having fled Ukraine back to Russia, Burisma scrambled to shore up a new power base. Within six weeks of the revolution, the firm brought big names onto its board, including former Polish President Alexander Kwasniewski, Biden, and Devon Archer, pal to Hunter and the college roommate of Christopher Heinz, stepson to John Kerry. They would later add former CIA counter-terrorism chief Cofer Black. […]

Essentially, a mob enterprise gearing up to defend itself against international lawsuits and seizure orders hired as decorative cover an ex-president of Poland, the son of a sitting U.S. Vice President, and a close family friend and business partner of the son of the American Secretary of State — not exactly subtle, and far beyond nepotism.

The truth of these events, then, is more nuanced — less binary if not less damning — than the black-and-white lens we are offered to view them through:

The Burisma board deals were a protection scheme, funded with stolen money and designed to scare off commercial rivals and would-be regulators alike. Archer and Hunter Biden, even if they never did a minute of work for Burisma, were being paid to provide a criminal enterprise with the appearance of American protection. Similarly, if Joe Biden never actually intervened on behalf of Burisma, Hunter’s presence on Burisma’s board made it possible for anyone to argue that he was.

At best, Biden and Archer were put on Burisma’s board to provide Zlochevsky and Burisma protection against their enemies in the new, unfriendly-to-Zlochevsky Ukrainian government. Whether Biden and Archer knew this or not — and how could they not know? what could this free money otherwise be for? — it corrupted them both to take those jobs.

For them to benefit from these gifts and yet be widely defended for taking them, is one more instance, as anyone with eyes must know, of institutional corruption at its core. Accepting these board positions goes “beyond nepotism,” in Taibbi’s phrase, to complicity with all the corruption abroad we supposedly abhor — and which we use as a reason to overthrow unfriendly governments. Yet this kind of corruption can never be prosecuted here, because our own corrupt institution — the present American state — has legalized and legitimized it.

For example, here’s Matt Yglesias, a Hunter Biden critic, making the Establishment case for Biden’s relationship with Burisma: “The worst you can say about any of this, however, was that Hunter’s position on the board was a standing conflict of interest that should have been avoided. There’s no evidence that Joe did anything wrong, specifically.”

That’s not the worst you can say. Hunter Biden can be — and likely was — both innocent and guilty simultaneously. He didn’t have to be “taking a bribe for Joe” or “just benefiting when he can” to be complicit in, and a beneficiary of, everything that’s wrong with the stinking Ukrainian state. That’s an overlap of ideas our modern media, and our Trump-obsessed, #BackToBrunch liberal minds, can’t seem to fathom.

I can’t wait to see what happens after Biden takes the White House. No one will be going back to brunch.