Yves here. There is already enough pressure for men to be manly that gender-bending men are pretty certain to be acting on deeply-seated desires, as opposed to corrupted by fads and fashion, as China appears to believe.1

With a gender ratio like this, which equates to not enough men being able to get laid unless you assume a pretty high level of prostitution and/or unfaithful female spouses, you’d think China would accept “deviations” from male norms as alleviating pressure on a severe gender imbalance: 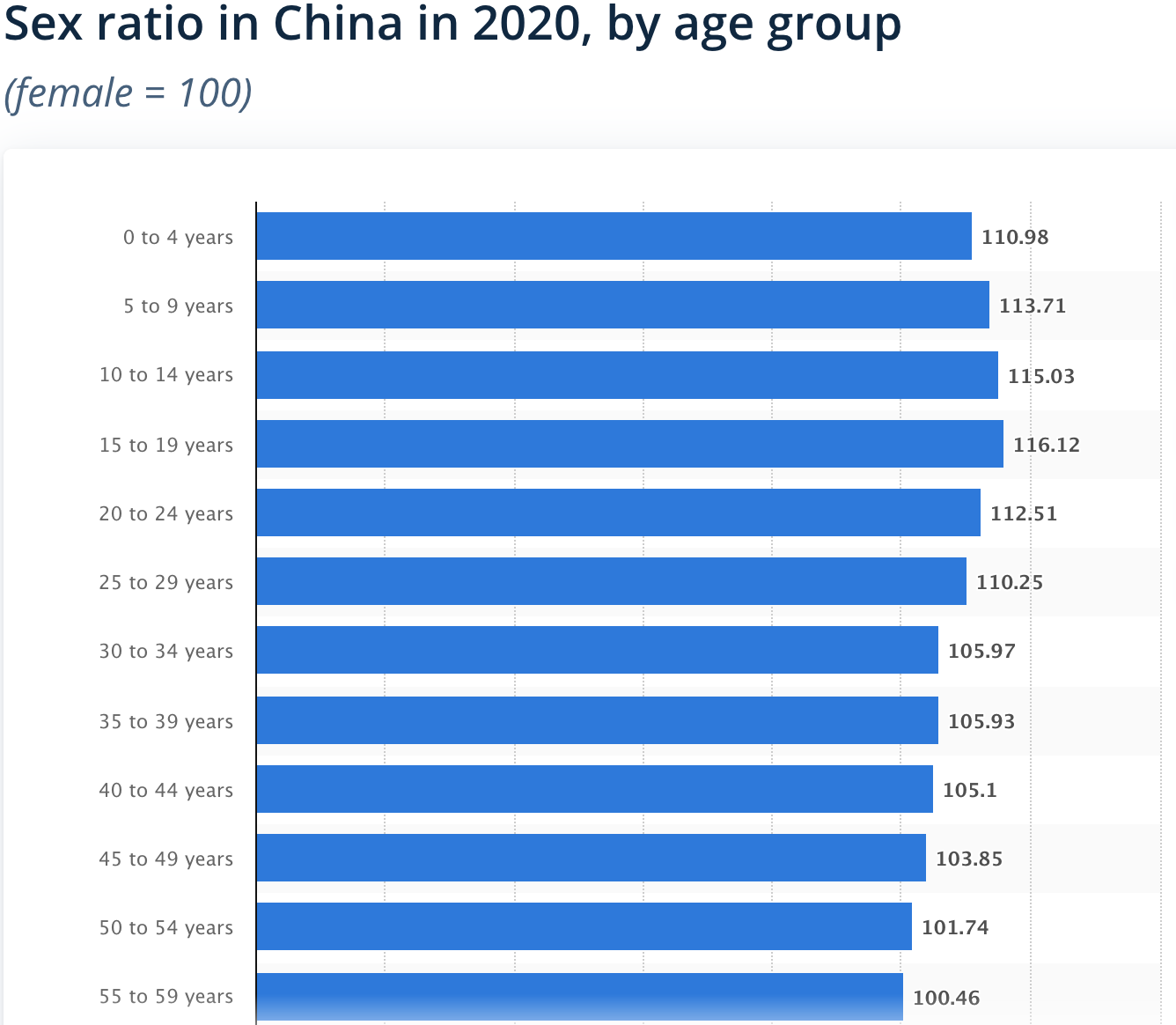 Having said that, one long-standing outlet for surplus males is the military…And I wish this article was more inquisitive about what China is trying to accomplish with aggressive enforcement of gender norms. It certainly isn’t helpful in encouraging young families to have more girls if men are prized. And this level of social control does not look consistent with confident leadership.

By contrast, the Thais embrace gender fluidity, and depending on who is doing the counting, has anywhere from 11 to 18 identities.

By Xinting Wang. An edited article which first appeared on gal-dem, cross posted from openDemocracy

Reaching for his foundation and beauty blender, Pan Ning tells gal-dem that men like him are not welcomed in his country. “Society expects men to be warriors and accuses effeminate boys of being ‘perverts’,” says the 23-year-old college graduate, speaking via Zoom from Shanghai, China.

In recent years, the Chinese government has been fighting to eradicate what it deems “abnormal” gender aesthetics– such as an androgynous wardrobe and boys wearing heavy make-up – in schools and the entertainment industry. But their campaign has stepped up a notch recently, following the rise in popularity and style of ‘effeminate’ male idols.

Aiming to develop a “healthy” cultural environment for the next generation and to succeed in “national rejuvenation” (President Xi Jinping’s plan for the country to enter a new era), the Chinese government has introduced a raft of legislation affecting popular culture and society. It is waging a war against what it deems to be unorthodox masculine expressions, in an attempt to “save our boys” from the so-called “masculinity crisis”.

China’s ‘masculinity crisis’ stems from long-standing reinforced stereotypes of genders and homophobia, according to Lü Pin, a leading Chinese feminist activist who has been fighting gender-based discrimination since the late 1990s. “Women are considered inferior, obedient and are not able to retain power in the office,” Lü tells gal-dem via phone from New Jersey, US, where she now lives. “That’s why, when boys don’t conform to gender norms as a masculine tough guy, the government gets worried. They are afraid that men will lose their dominant power in everything.”

‘Training Boys To Be Real Men’

The proclamations have come from different layers of the Chinese government, largely aimed at male teenagers. State media has played a role too, reinforcing this messaging by arguing that a lack of exercise has spoiled many young men and made them too ‘soft’ for the military.

In 2018, military training programmes emerged all over the country, designed to “train boys to be real men”. The Real Boys Club, founded in 2012 in Beijing, teaches boys to play golf and American football, and to go sailing.

In January last year, China’s education ministry responded to a proposal on preventing the “feminisation” of male teenagers, saying that the country should recruit more gym instructors to improve male students’ “masculinity power”.

And in May, top politician Si Zefu argued that Chinese male teenagers have “characteristics of weakness, low self-esteem and timidity” and these ‘sissy’ boys may be “a threat to the development and survival of the nation”. Si further claimed that the country’s loss of masculinity lies in the “feminine environment” that most children were raised in.

The “save our boys” slogan has been taking root in schools across the nation for four years. A primary school principal working in Hangzhou (the capital of Zhejiang province), who gave her name as ‘Zhou’, told gal-dem that since 2018 her institution had started hiring more male teachers and implementing more physical training activities, in response to state pressure.

“The policies make us worried that if we have too many female teachers, then we may be in trouble,” says Zhou. “We are taking the gender ratio into account more seriously these days.”

It’s not only in schools that traditional, heteronormative notions of masculinity are being enforced. Since 2019, the “boy crisis” campaign has turned a harsh spotlight on  male celebrities. Many male celebrities’ tattoos, earrings and ponytails have been blurred out online, in accordance with the country’s campaign to put an end to ‘girlie’ appearances.

The language of the regulations introduced in September last year made the government’s stance clear, boycotting the appearances of ‘girly’ male idols by using the Chinese sexual slur niang pao, or ‘sissy’. The regulation further claimed that these “abnormal aesthetics” would corrupt the next generation.

“Regulations have shaped the culture,” says Lü, with a dry laugh. “It should be the other way around.”

‘Little fresh meat’, or xiao xian rou– meaning male idols associated with soft masculinity – are now becoming the target of government officials. As ‘idol’ talent shows such as Youth with You, Chuang (the Chinese version of Japan’s Produce 101),where audiences vote for their favourite contestants to form a pop girl or boy group, have gone viral in China,many male celebrities have been adopting the kind of make-up worn by K-pop stars, and sporting glamorous jewellery.

Cultural influences from across the East Asia region have helped shape different expressions of gender in China. “Many of China’s biggest young male stars in recent years have challenged traditional masculine ideals, thanks in large part to the influence of Korean pop,” said Dr Wang Shuaishuai, a digital culture lecturer at the University of Amsterdam, in an interview with the BBC last December.

“These regulations shouldn’t control what we want to see on TV,” says Pan. “We are hoping to see diverse gender representations.”

Despite government efforts, millennial gender identities have become more fluid in the past few years. On social media platforms such as Weibo and Douyin (the Chinese version of TikTok), hundreds of male influencers are sharing beauty tips online as more young men have become increasingly appearance-conscious. In addition, drag influencers are also taking up the space to educate netizens on diverse gender roles.

And while different expressions of gender and sexuality have gained representation and visibility in recent years, many believe that the regulations targeting ‘sissy men’ pose a threat to LGBTQ+ communities in China.

For some, the regulations seem to be already having a deadly impact. Last November, the body of 26-year-old blogger Zhou Peng was discovered in Zhoushan (in Zhejiang province). Zhou had died by suicide; in a note uploaded to his Sina Weibo account on 28 November, the influencer had spoken of his distress at childhood bullying for “looking like a girl” and being called “sissy”.

Although Zhou stressed that his death “has nothing to do with anyone”, in the wake of the tragedy, Chinese netizens are debating the impact of the state’s masculinity campaign on the mental health of young men.

The crisis has brought paint to both women and men. As a person who is actively exploring his gender identity, Pan says that it is nearly impossible to live as a man with an effeminate character. “Society looks down upon women and LGBTQ+ communities,” he comments. “I guess only tough straight guys are allowed to breathe in the country.”

Chao Xiaomi, a non-binary blogger who has 13,000 followers on Weibo, told gal-dem that “society expects men to be competitive, to be the sole breadwinner in the house. However, there are many people like me who do not fit into the mainstream gender stereotypes. Women can be tough and competitive as well.”

Some experts have highlighted that the tightened controls over gender roles and stereotypes has intentionally coincided with a time of rising nationalism, led by President Xi’s “wolf warrior diplomacy”, which has emerged during the COVID-19 pandemic.

Lü is worried that the raft of regulations may choke off diverse gender representations in the country. “China’s rising nationalism is often associated with the ableism of masculinity,” she says. “If you do not conform to the government rules to achieve national rejuvenation, then you are not patriotic. The government first ‘erased’ people with different political beliefs out of the country, and now it is coming after people with different ways of living.”

1 I have known some gay men who had such terrible relations with their mothers that they might be thought of as gyno-phobic, but they nevertheless also were attracted to men.