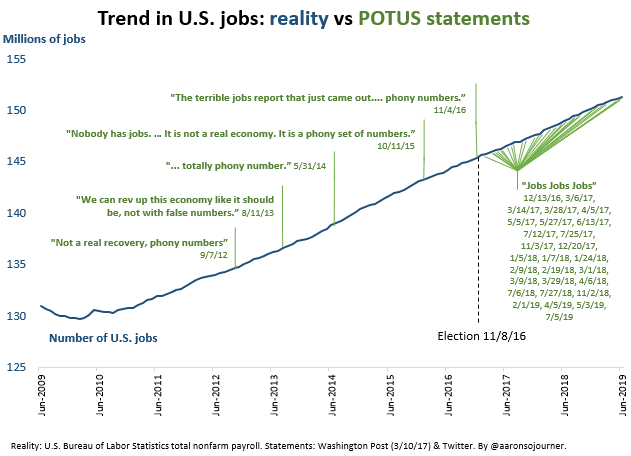 I am in the middle of something else, and don’t have time for a long rant, but AYFKM about not reporting new unemployment claims not too far off in the future, perhaps the non-farm payroll?

The chart above, via  Aaron Sojourner, a former Senior Economist, U.S. President’s Council of Economic Advisers, during 2016 – 2017. He points out that the trend in employment from 2010 to 2019 is essential indistinguishable – whether you look at by years, Congressional terms or presidencies.

The NYT broke the news last night that the Trump administration asked states to abstain from releasing unemployment-claims figures — at least prior to the publication of a national compilation of weekly U.S. jobless claims. This is a crucial tool used by many analysts and economists, looking at how the micro-trends in various states and municipalities contribute to the broadest macro-trend. It is crucial if you want the earliest possible warnings of what is happening — not quite real time data, but sooner than weekly data.

This request did not just to New York and California (11.5% of workforce idled), but the entire nation.

Given the history of this administration, the immediate suspicion is they are trying to tamp down bad news rather than confront it head on, and respond to it. It is as if the unemployment numbers were a cruise ship filled with Coronavirus infected Americans, and the President did not the passengers to move to Hospitals on land because it would affect his numbers.

I cannot hear the things this administration is saying, because their words are being drowned out by their actions.