Yves here. This coronavirus take differs from other interpretations. Curious as to what other readers make of it.

Here is the update through May 12.

I will restart giving the daily increase in infections if States that have “reopened” start to increase significantly again. The preliminary evidence is that customers are largely staying away from reopened businesses in those States.

Number of new and total reported Infections (from Johns Hopkins via arcgis.com and 91-divoc.com):

There has been a 1/3 decrease in the number of new cases in the US from peak. The US nevertheless has the worst record in the world, by far. 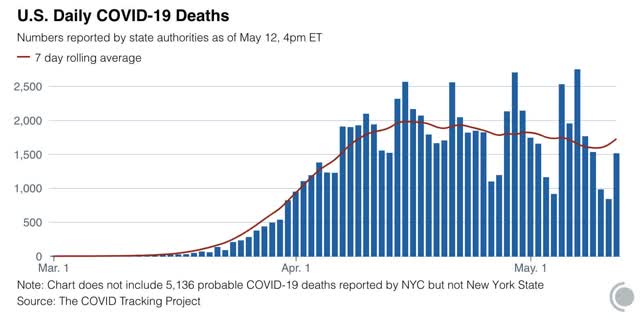 *These numbers exclude 113,489 past negative tests reported by NJ on May 11

Since April 19, the percentage of positive to total tests has declined from about 20% to 7%. Within one more week the US will hopefully be at 6%, which, based on the history of South Korea, lockdowns can begin to be judiciously lifted and a thoroughgoing regimen of “test, trace, and isolate” can be begun.

The 50+ Petri Dishes of Democracy

The below graphs from Peter James Walkercompare the NYC metro area with the rest of the country: 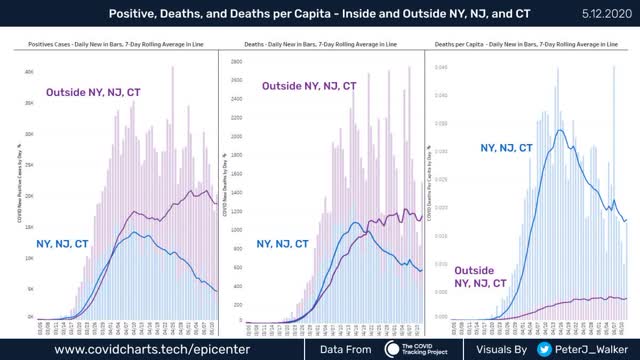 1. The number of new infections in the rest of the US increases dramatically starting on April 20, the same date that testing nationwide broke out of its 150-160,000 range and increased to nearly 300,000/day. This shows that the increased cases outside of NYC were mainly an artifact of increased testing.

2. The number of new infections in the rest of the US has *decreased* in the past week. Once we hit enough tests, the underlying trend – a slight but significant decrease in new infections – came through.
. While the NYC metro decline is the lion’s share of the nationwide decline, in absolute and even per capita terms, the NYC still has far more new cases than the rest of the country as a whole.

Conor Kelly has put up a number of very good public graphs on Tableau, including an excellent State by State comparison that is adjusted for scale (Note the different scales for each line): This clearly shows that, for the scale of outbreak, NY and NJ have been in a scale all their own, and that their huge decrease still shows them having a large number of cases.

On the other hand, down at the very bottom line “Tier 4,” we see Hawaii plus 5 rural States (AK, MT, VT, WV, WY) “crushing the curve.” Based on the criteria I set forth yesterday, and including this graphic, I rate the States in the below summary.