Yves here. Apologies for being heavy on Covid coverage, but Omicron is in overdrive while the political and business worlds are still getting up to speed after the holidays. New York City may be a canary in the coal mine as far as the impact of Omicron on schools is concerned. One reason for running this post is to elicit reader intel on how schools in their communities are faring.

Many elements of this story are striking: the plunge in attendance rates, the level of teacher absences, and the fear among students. But this stuck out and was part of the subhead: “unvaccinated children fill hospital intensive care units.”

Recall that children under 5 cannot be vaccinated. Pfizer found its vaccine didn’t elicit a strong enough antibody response on 2 to 5 year olds to justify its use.

So school openings have the potential to generate bad second-order effects: older kids get Omicron (whether a bad/symptomatic case or not), and infect younger siblings and babies who are more vulnerable.

And the photo below says it all: students cheek by jowl eating lunch, with three adults hovering, two in mere cloth masks.

By Katie Honan, Josefa Velasquez and Farah Javed. Originally published at THE CITY on January 3, 2022 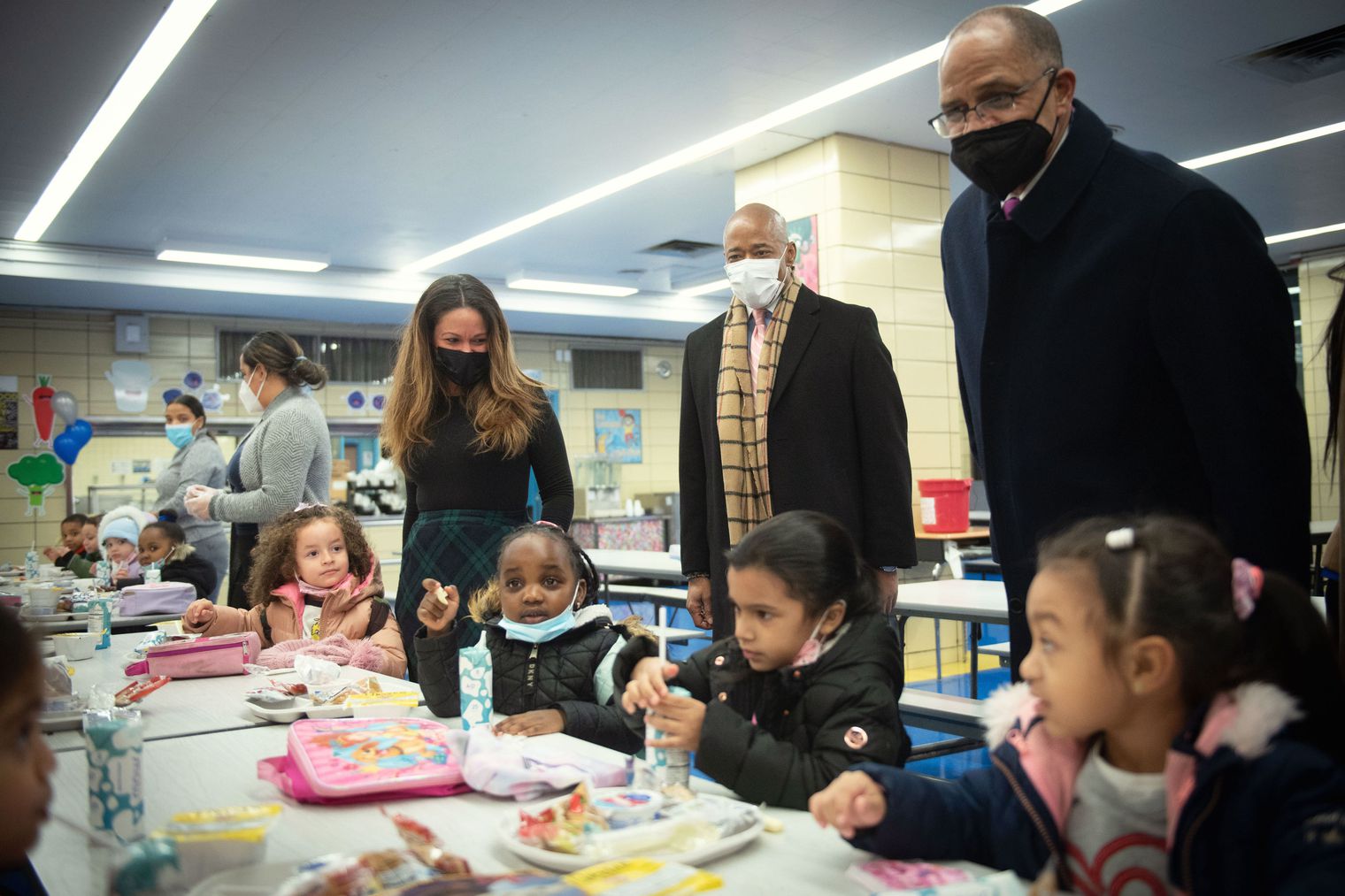 “We want to be extremely clear: the safest place for our children is in a school building,” the mayor said at a press conference after visiting Concourse Village elementary school in The Bronx. “And we are going to keep our schools open and ensure that our children are safe in a safe environment.”

While nearly a million children were scheduled to return to public school classrooms, children with COVID infections — almost all of them unvaccinated — are filling up hospital intensive care units, say those who treat them.

The city’s teachers union called for temporary remote learning as New York City fights the latest COVID wave, as the share of positive COVID tests across the five boroughs reached 22% on Monday.

Some parents and teachers called for a “sick out” to protest the lack of a remote school option. Student attendance at city schools on Monday was 67.38%, according to the Department of Education —in contrast to rates that approached 90% this fall.

Data on absences from teachers, administrators, and staff at city schools was not immediately available, according to the DOE.

Students who did show up expressed anxiety.

“I am constantly in fear of getting COVID because of the people around me that aren’t willing to follow the safety precautions correctly,” said Katherine Jiang, 16, and a student at Fort Hamilton High School in Bay Ridge.

She thinks schools should resume remote learning — the online education all students experienced for some or all of last year — as cases continue to rise.

“People are still missing [in-person] learning because they are scared of getting COVID,” she added. “They would rather stay home.”

School staff are also facing their own attendance crisis.

On Sunday evening, the principal at P.S. 58 in Carroll Gardens alerted parents that the elementary school would remain closed because of staffing shortages. On Monday evening, they reversed course.

But a similar fate could await other schools, like a Brooklyn elementary where roughly a third of staff called out on Monday, third grade teacher Andrea Castellano told THE CITY.

“My school was almost at that point. We had 20 absences today,” Castellano said, speaking of her school’s teaching and support staff. “There are no subs. On a normal day you might be able to get an [Absent Teacher Reserve] or somebody who could cover the class, but with 20 people out, there’s nobody to do it.”

But Adams, facing the daunting COVID recovery in his first week in office and a surge of record-level infections, said students will remain in school — and pointed to vaccination and the distribution of 1.5 million take-home COVID tests as one way the buildings will remain safe.

Adams appears to have an ally in Gov. Kathy Hochul, who is pledging to keep schools open even as some schools across the state are switching to remote learning because of staff shortages.

In Rochester Monday, Hochul cautioned against remote learning, citing accessibility issues for communities of color that may lack access to high-speed internet and other resources.

Vaccination rates among children lag, even following Food and Drug Administration approval of vaccines for children as young as age 5. Just 43% of children 5 to 17 are fully vaccinated in the five boroughs, with 13% partially vaccinated — while nearly 44% of eligible kids remain unvaccinated, according to the city Department of Health and Mental Hygiene.

“I’m the chief of the ICU, and I can tell you right now we have the most number of kids that we’ve ever seen in this entire pandemic admitted to the ICU and the hospital, frankly. We’ve seen 50 kids, for example, in the hospital today who have COVID and more than half of my ICU is positive for COVID right now, which is just unheard of,” Schneider told THE CITY.

While some of those kids come in for other reasons and happen to test positive for COVID in the hospital, for many other young patients the virus itself “is contributing to their illness,” he said.

The rates are a “dramatic change” from mid-November when maybe one or two kids with COVID would be treated at the hospital, Schneider added. The vast majority of the hospitalized children — some as young as a few weeks old — are unvaccinated and have illnesses that span from fevers and respiratory issues like pneumonia, to neurological conditions, Schneider said.

David Banks, the new schools chancellor, outlined health and safety protocols in an email sent out to schools across the city.

Students who test positive for COVID must isolate for 10 days following the first positive result.

In The Bronx Monday morning, Adams and Banks also discussed a new “command center” for principals and district leaders to address any issues, although it’s unclear how this differs from the current “situation room” which tracks positive cases in schools.

Banks said that “schools are safe by design” based on mandatory health screenings and testing.

“They have to pass a health screening, that building has fully functioning ventilation, universal mask usage, and every adult is vaccinated,” he said Monday. “These measures make schools the safest environments for young people to be in.”

In an interview on NY1 Monday night, Banks said that “over 98%” of students previously ordered to quarantine never got sick or tested positive.

But some students said the mandatory health screenings didn’t do much to make them feel safe.

“It’s useless and I feel my safety is in danger,” said Yin Yan Lui, another 16-year-old student at Fort Hamilton High School. “I don’t know how to protect myself from other people who got it. I would want school to close down because it’s really dangerous and scary.”

Antonio Zuccardi, a 17-year-old senior at James Madison High School in Midwood, Brooklyn, said he’s trying to make it out of the latest COVID wave without getting sick.

“I feel safe about it even though it’s rising but I haven’t gotten positive yet,” he said. “I hope to stay that way, but if there are cases I will take precaution and keep my distance.”

In lower-income neighborhoods like the one Castellano teaches in, a shortage of testing sites, underlying health conditions, low vaccination rates and racial demographics means students and their families are at increased risk of getting sick.

“People in power should be thinking about those dynamics [and] how equitable they are across the city,” she said. “This is an equity issue. It’s not the same for everybody.”

“It’s a giant experiment with children being the main pawns for this. They’re mostly unvaccinated and most vulnerable and they’re doing the least to protect them,” Castellano said.

Teachers at Castellano’s school have also had to largely pause their planned lessons for the past few weeks due to poor student attendance spurred by the influx of new cases.

While fewer than half of her students showed up to school Monday, in other classrooms you “could count some of the class numbers on one hand,” forcing teachers to press pause on their instruction until more students show up.

Adams pushed back firmly on such concerns.