Activism is every and always a big team effort, but sometimes key individuals make invaluable contributions. This is one of those case. Economists Eileen Appelbaum and Rosemary Batt have been on the trail of private equity for over a decade, with their first high profile exercise being their landmark book, Private Equity at Work. It illustrates their relentless method: a very careful and even-handed reading of academic studies, including setting forth omissions and sleights of hand in the data set and the analysis.

In recent years, Appelbaum and Batt took a hard look at the abusive practices of private equity owning outsourced medical practices. Far and away the two biggest players are Blackstone’s Team Health and KKR’s Envision Healthcare. Appelbaum and Batt documented the extent of their reach and their heavy use of so-called “surprise billing” as in structuring their operations so that their employees would not be subject to insurers’ negotiated rates.

I am separately surprised at how it has taken so long to sue these companies for the illegal corporate practice of medicine, but a case was filed in California at the end of last year.

Appelbaum’s and Batt’s work got the attention of activists and journalists. Press coverage began to flag the private equity as the hidden hand behind surprise billing. In 2019, Appelbaum wrote an op-ed for The Hill, a proof that the idea of curbing this private equity abuse was getting traction in the Beltway. From our post then:

Private equity maven and co-director of the Center for Economic and Policy Research Eileen Appelbaum explained in an editorial in The Hill in May how private equity firms have bought specialist physicians’ practices to exploit the opportunity to hit vulnerable patients with egregious charges:

Physicians’ groups, it turns out, can opt out of a contract with insurers even if the hospital has such a contract. The doctors are then free to charge patients, who desperately need care, however much they want.

This has made physicians’ practices in specialties such as emergency care, neonatal intensive care and anesthesiology attractive takeover targets for private equity firms….

Emergency rooms, neonatal intensive care units and anesthesiologists’ practices do not operate like an ordinary marketplace. Physicians’ practices in these specialties do not need to worry that they will lose patients because their prices are too high.

Patients can go to a hospital in their network, but if they have an emergency, have a baby in the neonatal intensive care unit or have surgery scheduled with an in-network surgeon, they are stuck with the out-of-network doctors the hospital has outsourced these services to….

It’s not only patients that are victimized by unscrupulous physicians’ groups. These doctors’ groups are able to coerce health insurance companies into agreeing to pay them very high fees in order to have them in their networks.

They do this by threatening to charge high out-of-network bills to the insurers’ covered patients if they don’t go along with these demands. High payments to these unethical doctors raise hospitals’ costs and everyone’s insurance premiums.

As an example, Appelbaum cites the work of Yale economists who examined what happened when hospitals outsourced their emergency room staffing to the two biggest players, EmCare, which has been traded among several private equity firms and is now owned by KKR and TeamHealth, held by Blackstone:

….after EmCare took over the management of emergency services at hospitals with previously low out-of-network rates, they raised out-of-network rates by over 81 percentage points. In addition, the firm raised its charges by 96 percent relative to the charges billed by the physician groups they succeeded.

The study also described how TeamHealth extorted insurers by threatening them with high out-of-network charges for “must have” services:

…in most instances, several months after going out-of-network, TeamHealth physicians rejoined the network and received in-network payment rates that were 68 percent higher than previous in-network rates.

A push on Capitol Hill to stop US patients from being caught unaware by medical bills is weighing on the debt of KKR-backed Envision Healthcare, the target of one of the biggest leveraged buyouts last year…

Investors are concerned that a new so-called “surprise billing” law could crimp revenues at companies such as Envision, which employs emergency-room doctors and anaesthetists through its subsidiary EmCare….

“It is like a ransom negotiation: ‘I’ll hit your enrollees with giant bills unless you pay me enough money not to do that’,” said Loren Adler, associate director at USC-Brookings Schaeffer Initiative for Health Policy.

Envision’s $5.4bn loan due in 2025, sold in September when investor demand for leveraged loans was very strong, slid from almost 97 cents on the dollar at the start of May to just 87.8 cents on the dollar on Thursday, as more detail surrounding possible legislation has been released. 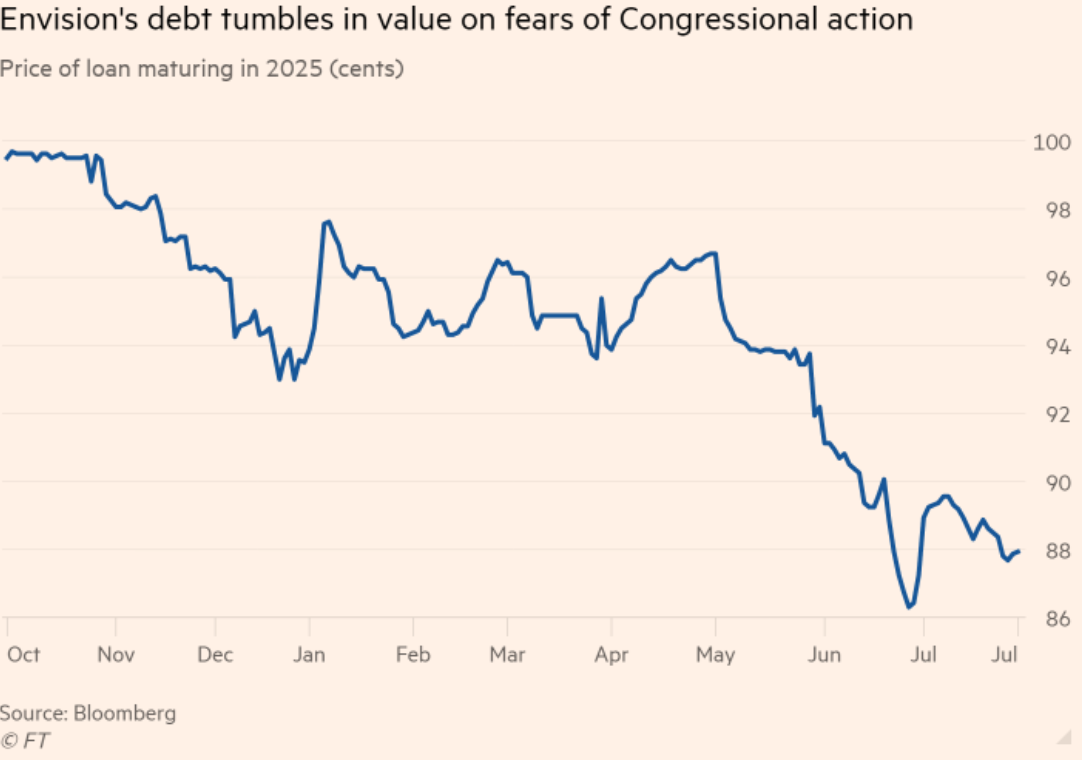 Back to the current post. Appelbaum is too unassuming to take a victory lap, but her new article in American Prospect, Envision Healthcare Hits the Skids, confirms that the effort she and Rosemary Batt spearheaded has drawn blood:

Envision Healthcare—the private equity–owned emergency medicine group with some 70,000 health care professionals staffing 540 health care facilities in 45 states—is in serious financial trouble. Creditors have lost confidence in its ability to repay its huge debt. Envision’s $5.3 billion first-lien term loan, due in 2025, was trading in distressed-debt territoryat the beginning of March 2022, at 73 cents on the dollar; and its senior unsecured note due in 2026 was trading at 53 cents on the dollar….

Envision’s reliance on surprise billing became clear by mid-2019. As public anger rose…Both houses of Congress introduced a joint, bipartisan bill to ban surprise medical bills that was expected to pass by the end of that year….

Financial markets understood that, if the surprise-billing ban passed, Envision would not be able to pay off its debts. Envision’s first-lien term loan, the most secure debt held by creditors, quickly tanked to 50 cents on the dollar. When House members introduced a competing, PE industry–friendly alternative, stalling the effort, Envision’s debt recovered to around 70 cents, and hovered there through the first half of 2020. 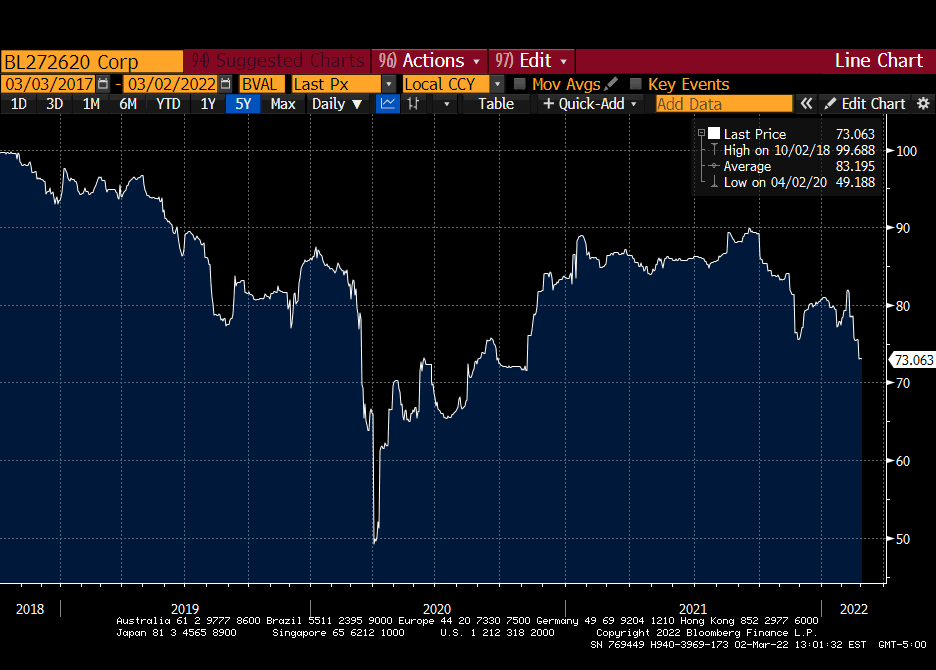 Envision Healthcare was whacked by Covid and was on its way to bankruptcy but staved it off due to Cares Act bailout funds and pulling down all of its credit lines. However, its outlook remains poor. Private equity lobbyists thought they had dodged a bullet by having No Surprises Act billing disputes be subject to arbitration. But Health and Human Services Department regulations respected Congressional intent and required arbitrators to use a local median of in-network rates as their guide. Admittedly, a Texas court has sided with a challenge to that rule, so private equity may get some undeserved breathing room.

But Envision Healthcare is still in trouble. Appelbaum anticipates that KKR will be forced to create a “Good Co/Bad Co” and will load the debt on Bad Co. The problem is that precedent suggests that Bad Co’s in the health care arena do a lot of harm:

HCR ManorCare provides a disturbing preview of what may happen. PE firm Carlyle acquired the chain of over 500 nursing homes in 2007 for $6.3 billion, with $4.8 billion in debt. In 2011, Carlyle sold off the chain’s real estate to Healthcare Properties (HCP), a real estate investment trust, for $6.1 billion, pocketing more than $1.3 billion on the deal. Carlyle’s sale-leaseback arrangement unfairly burdened ManorCare with unaffordable rent payments. By 2012, unable to make these payments, ManorCare began laying off hundreds of employees. HCP responded to ManorCare’s decline by retaining its own “good performing” assets and spinning off ManorCare’s bad ones into a new REIT called Quality Care Properties (QCP). QCP sued Carlyle for back rent payments, and in 2018 ManorCare filed for bankruptcy. Between the time ManorCare’s real estate was split in two and the time of its bankruptcy, investigators had cited the chain for thousands of health code violations, as exposed in an investigative report by The Washington Post. Health code violations increased by 25 percent to 2,000 per year, almost all related to understaffing. Serious health code violations posing “immediate jeopardy” rose 29 percent.

And sadly, the real bad actor, KKR, will not suffer. Private equity fee structures assure that the fund manager makes money even when its deals fail. But at least a spectacularly abusive practice has been checked and may be on its last legs. But this example illustrates how much force needs to be brought to bear to stop grifting. And hats off to Eileen and Rosemary for not giving ground in this long-running fight.

1 Until pretty recently, it was virtually impossible for academics not friendly to research private equity performance. The data was private and the PE firms would provide it only to friendlies. This of course allowed the industry to