Yves here. Post author Danielle Paradis appears to assume readers are down the curve on the bogus claims made about blue hydrogen as a green energy source, although she does make that point late in the piece. By way of background, consider: 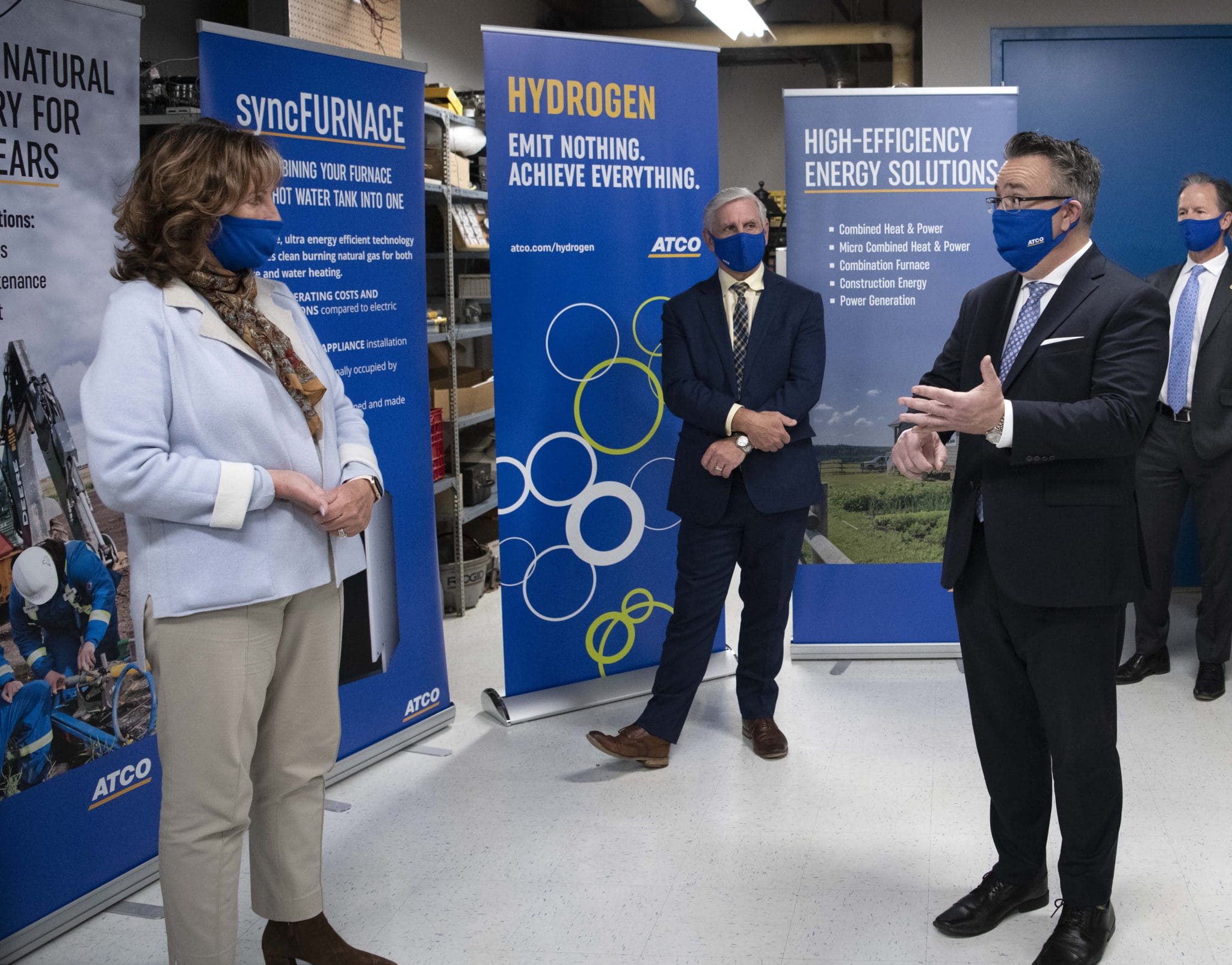 Talk to fossil fuel execs, government ministers, and industry reps these days and they’ll all tell a similar story: Blue hydrogen is the clean fuel of the future that will help Canada and the world get to net-zero emissions. It’ll power everything from airplanes to long-haul trucks and will even heat our homes.

Canadian media has called blue hydrogen, which is produced from natural gas and has its emissions captured, “a key part” of the nation’s emissions-reduction strategy and “fairly clean” — a claim that echoes an infographic from ATCO, a major Canadian energy company, that said blue hydrogen produces “nearly zero emissions.”

The Canadian government is relying heavily on this fuel source to deliver the promises in its net-zero emissions goals. In December 2020, the government released a hydrogen strategy that suggests that rapid expansion of the hydrogen industry — including “large-scale blue hydrogen production” by 2030 — could help the country “achieve our net-zero goal all while creating jobs, growing our economy and protecting the environment.”

“Unlocking the potential of hydrogen is an essential part of our government’s plan for a sustainable and economic future.”#hydrogenexpo pic.twitter.com/DLIG0Bohis

Alberta, long the heart of Canada’s oil and gas industry, is banking on hydrogen, too. “It was really starting to settle in that we had probably had the last [oil and gas] boom,” then-Mayor of Edmonton Don Iveson told the Narwhal in early 2021. Hydrogen tantalizingly represents continued jobs and investment in the region.

Earlier this year, Edmonton hosted the inaugural Canadian Hydrogen Convention, which was sponsored by city and regional government, various Alberta-based business interests, and Canadian and international fossil fuel companies. The city will also be home to a hydrogen hub that paints a rosy picture of a future in which “buses, trains, heavy trucks, home heating, and farm equipment all run on zero-emissions hydrogen” and the fuel will “ensure long-term economic competitiveness as the world shifts towards a low-carbon future.”

“Our province is securing our future as a powerhouse in clean energy production,” claimed Premier Jason Kenney last summer when announcing Alberta’s $1.3 billion investment in the Edmonton hydrogen hub.

The problem with this blue rhapsody? It’s not what it seems.

The oil and gas industry is counting on both governments and the public buying into blue hydrogen, which has been called a $100 billion dollar opportunity and was featured at a gas industry conference earlier this year. To fuel this hype, the industry has produced inaccurate or misleading information that claims a combination of hydrogen as a fuel source and carbon capture will make blue hydrogen the energy resource of the future.

Kenney is a long-standing critic of climate science and booster of claims that foreign-funded environmental groups are undermining Canadian fossil fuel interests. Yet, as DeSmog’s new map of hydrogen lobbying actors in Canada shows, among the biggest beneficiaries and proponents of Alberta’s blue hydrogen push are U.S. company Air Products, Shell, Toyota, and France Hydrogène.

Hydrogen can store and carry energy, and most hydrogen is created by using heat and pressure to convert fossil fuels to hydrogen and carbon monoxide and dioxide. This is often referred to as “gray hydrogen.” It’s the addition of carbon capture and storage (CCS) to trap the CO2 that, in turn, makes some hydrogen “blue.” It’s also possible to extract hydrogen from water using electrolysis and renewable energy, resulting in “green hydrogen.” However, green hydrogen is prohibitively expensive to make, and as of 2019, accounted for just 1 percent of hydrogen production.

Because of the barriers to green hydrogen — the only form of the fuel that is truly “clean” — blue hydrogen has been getting increasing amounts of attention as an energy source that can help us transition away from coal, oil, and gas. In fact, Canada’s net-zero emissions strategy hinges on hydrogen being the clean fuel of the future.

This week UAE Energy leaders are in Canada to participate in @HYDROGEN_EXPO and meet innovative Canadian companies in the Hydrogen space. 🇨🇦-🇦🇪 collaboration in clean energy is already very strong, and there is great potential for new partnerships.@MarcyGrossman @JPLinteau https://t.co/Q7mrhMwI7T

Since 2019, there has been a renewed focus for a Canada-first energy strategy and a homegrown solution to climate change that will positively impact other parts of the world. When Alberta’s Premier Kenney ran for office, a key part of his campaign was the promise to investigate the alleged influence of foreign funding in undermining the region’s energy industry. The resulting report into “anti-Alberta Energy Campaigns” found a trail of foreign money but no evidence of wrongdoing or illegal activity. The report further found that it couldn’t be determinedwhether foreign funding for environmental campaigns was solely responsible for killing or delaying oil and gas projects.

Ironically, the hydrogen fervor has foreign fingerprints all over it. The multinational energy company Enbridge, alongside Canadian energy company TC Energy, have been involved in pushing hydrogen in Canada. Shell is working on creating a carbon capture and storage (CCS) facility in Alberta. Nikola Corporation, an American entity, is working with TC Energy to explore joint development of hydrogen hubs in the United States and Canada. And Air Products and Chemicals Inc., an American company, is part of the multi-billion-dollar plan to build Edmonton’s hydrogen hub, which will also rely on CCS to sequester a reported 95 percent of its CO2 emissions.

Blue Is the New Greenwashing

Despite the enthusiasm for hydrogen from the energy industry and sectors of the Canadian government, climate scientists are rebuffing the idea that blue hydrogen is a clean fuel. Methane — a greenhouse gas more than 80 times more powerful than CO2 — that is vented or leaked in the production and transportation of natural gas would not be captured by CCS. And doubts abound about how effective CCS technology is.

“The only argument for blue hydrogen is, ‘let’s keep the fossil fuel industry in business,’” said Mark Z. Jacobson, the director of Stanford University’s atmosphere/energy program. The claim by oil and gas companies that blue hydrogen is clean is lacking verified data on methane emissions and ignoring the infrastructure needed to produce the fuel, he explained.

In 2021, Jacobson and Robert W. Howarth published a peer-reviewed study in Energy Science and Engineeringlooking at the lifecycle of blue hydrogen’s greenhouse gas footprint.

“Far from being low carbon,” they wrote, “greenhouse gas emissions from the production of blue hydrogen are quite high, particularly due to the release of fugitive methane.”

There’s also a usability problem. “The only real useful applications of hydrogen are long-distance heavy transport and steel production,” Jacobson told DeSmog. When it comes to cars or household heating, he explained that hydrogen is a less efficient fuel source than battery storage.

According to the 2021 study, 96 percent of hydrogen is currently generated from fossil fuels.

A separate study by researchers including Joule Bergerson from the Department of Chemical and Petroleum Engineering at the University of Calgary, concluded that blue hydrogen can only be considered low-emission if the natural gas supply along the entire supply chain, including extraction, storage, and transport, stays under 0.5 percent.

Countries such as Norway, the UK, and the Netherlands claim to have met these targets, but Jacobson said that this is a claim provided without any proof. A study published earlier this year found that oil and gas infrastructure in New Mexico’s Permian Basin was releasing more than six times more methane than previously estimated by the EPA.

In Canada, there is significant evidence that the oil and gas industry is underreporting methane emissions in Alberta. According to the federal government’s official greenhouse gas inventory, methane currently accounts for 13 percent of Canada’s GHG emissions. Environmental Defense Canada studied a report by GreenPath, an Alberta-based energy services company, and the Alberta Energy Regulator, as well as infrared video footage and found that the emissions were 60 percent higher than reported, and equipment is routinely malfunctioning and leaking methane.

The entire foundation of Canada’s strategy for achieving net-zero emissions rests on the widespread adoption of hydrogen. But, increasingly, that vision for the future seems uncertain.

“Factor in the inevitable leaks of methane from the extraction and processing of the natural gas feedstock (around 3.5 percent for Alberta), and the concept of producing clean hydrogen from natural gas looks increasingly doubtful,” Martin Bush, a renewable energy consultant, wrote in Policy Options.