We are taking the liberty of hoisting the title of the Financial Times story on this new-improved-but-still-as-delusional West-is-gonna-punch-Russia-in-the-nose-but-good sanctions scheme. Quite honestly, I thought surely someone would put this one out of its misery. But it seems there is never an idea so bad that it won’t be put into practice.

So the US and EU are really mad that their sanctions have backfired. They are paying even more for oil and gas. They are even madder that Russia structures its taxes so they come mainly from foreign oil sales, so that the Russian government is awash with receipts.1

The EU and US making all kinds of noises that they will shellack Russia by going cold turkey on Russian oil and gas. But that’s proven to be sheer bluster. The US said it was going to embargo Russian oil but quietly backed away from that idea.2 Europe can’t replace Russian gas by this winter; it was going to fake its way to that end by maxing out on storage by the fall and then pretending that getting through the winter on previously-purchased Russian gas was the same as not getting through the winter with Russian gas.

Similarly, it took quite a while to conclude the sixth EU sanctions package, the centerpiece of which was a Russia oil embargo. Hungary resisted fiercely because all its oil from Russia is via pipeline, so it can’t finesse its origin, unlike oil carried by tanker. So the compromise, agreed at the end of May, was a “partial ban’, supposedly 2/3 immediately via banning all oil via tankers, and 90% by year end, with the only exception as of then being pipeline gas delivered through the southern segment of the Druzhba pipeline.

Maybe the EU hoped the imposition of the Russian oil embargo would moderate oil prices. It didn’t. The decline that began on June 9 was due to global growth fears. Oil prices kept trending up during and shortly after the latest EU sanctions were negotiated. From Trading Economics: 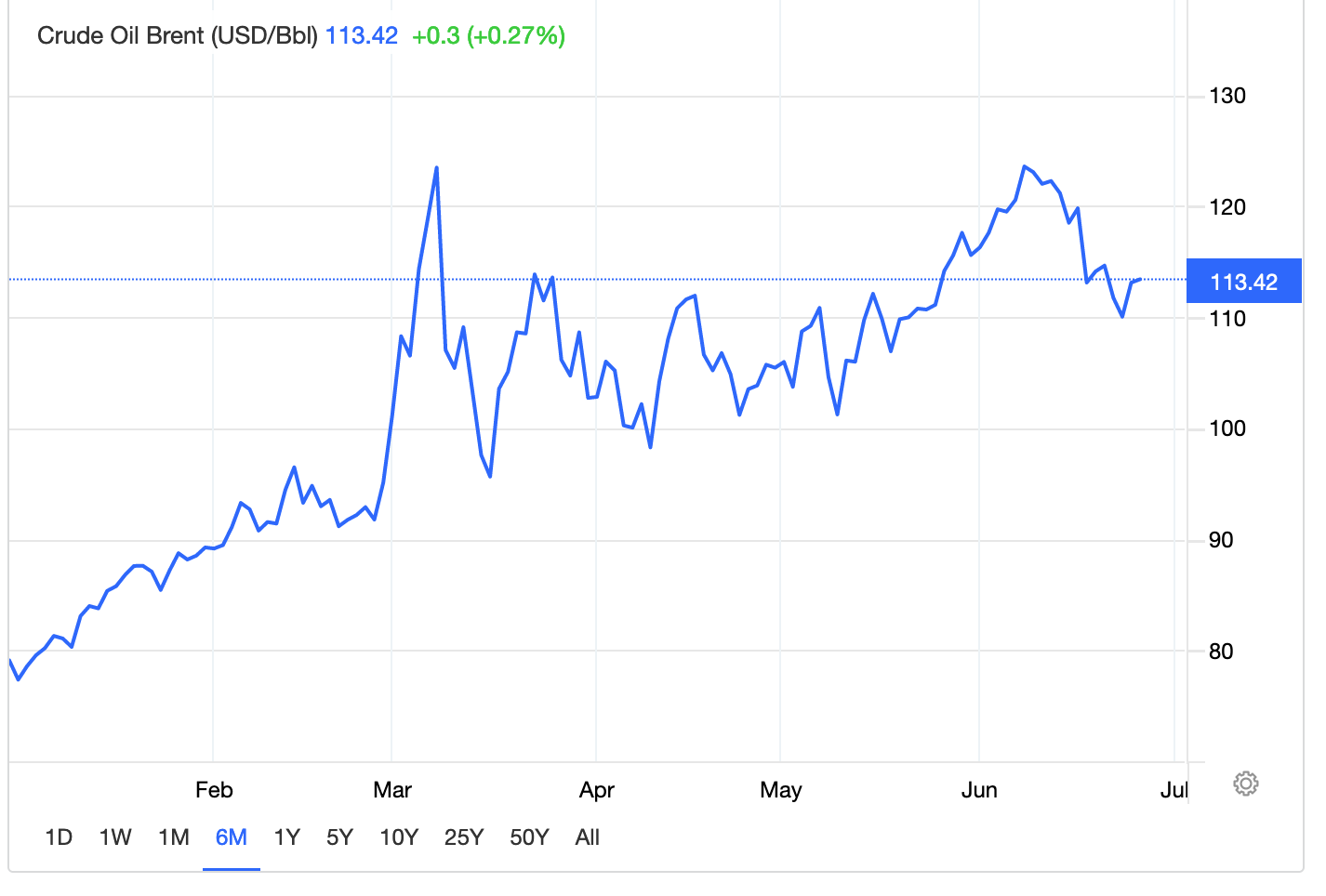 Many commentators believe Russian oil is getting to Europe via cutouts, meaning with markups, both crude oil and refined products. India is regularly described as a hub.

So the West has not effectively punished Russia and still is paying through the nose for energy. So what now? The “Just say no” plan! We’ll “Just say no” to those high prices!

It appears that no one in the G7 got the memo that “Just say no” means going without, which as we can see, the West is willing to do only optically. Avoiding being seen with your favorite guy and then shagging him in a closet doesn’t work.

From the Financial Times:

They hope a cap will limit the benefits of the soaring price of crude to the Kremlin war machine while cushioning the impact of higher energy prices on western economies.

The proposal has been strongly promoted by the US and recent comments by German officials suggested Berlin was also coming around to the idea.

Officials said that Mario Draghi, Italy’s prime minister, told fellow G7 leaders that energy price caps were needed because “we must reduce the amount of money going to Russia and get rid of one of the main causes of inflation”.

On Monday, the caps will be debated by a broader group when the leaders of Germany, the US, UK, France, Italy, Japan and Canada are joined by “partner” countries invited to the summit. These include India, which has become a big buyer of discounted Russian oil since the invasion of Ukraine, as well as Argentina, South Africa, Senegal and Indonesia.

I can’t imagine India will go along. India has pointedly resisted Western pressures to join in the “punish Russia” enterprise. Russia also just agreed to allow major Indian retailers to open stores in Russia. And the global South has also been very much put off by the open display of racism and colonial attitudes. If the G7 was offering important inducements like food shipments, that might be enough to turn them, but Russia is more likely to be a key provider of needed commodities than the G7. So why are they supposed to go along? Because the West wants their help?

Charitably assuming this deal gets done, it can go one of two ways. One is that it’s a damp squib, except for Russia stopping deliveries of pipeline oil to Europe, assuming they are on a floating rather than fixed price contract. That would hurt Hungary, which has made the mistake of trying to be sane (i.e., maybe the real point is to punish Hungary). Since pretty much no other oil is supposedly going to Europe, how can oil that it theoretically not (much) arriving be subject to price caps?

Similarly, according to the EIA, the US is not getting any oil from Russia: 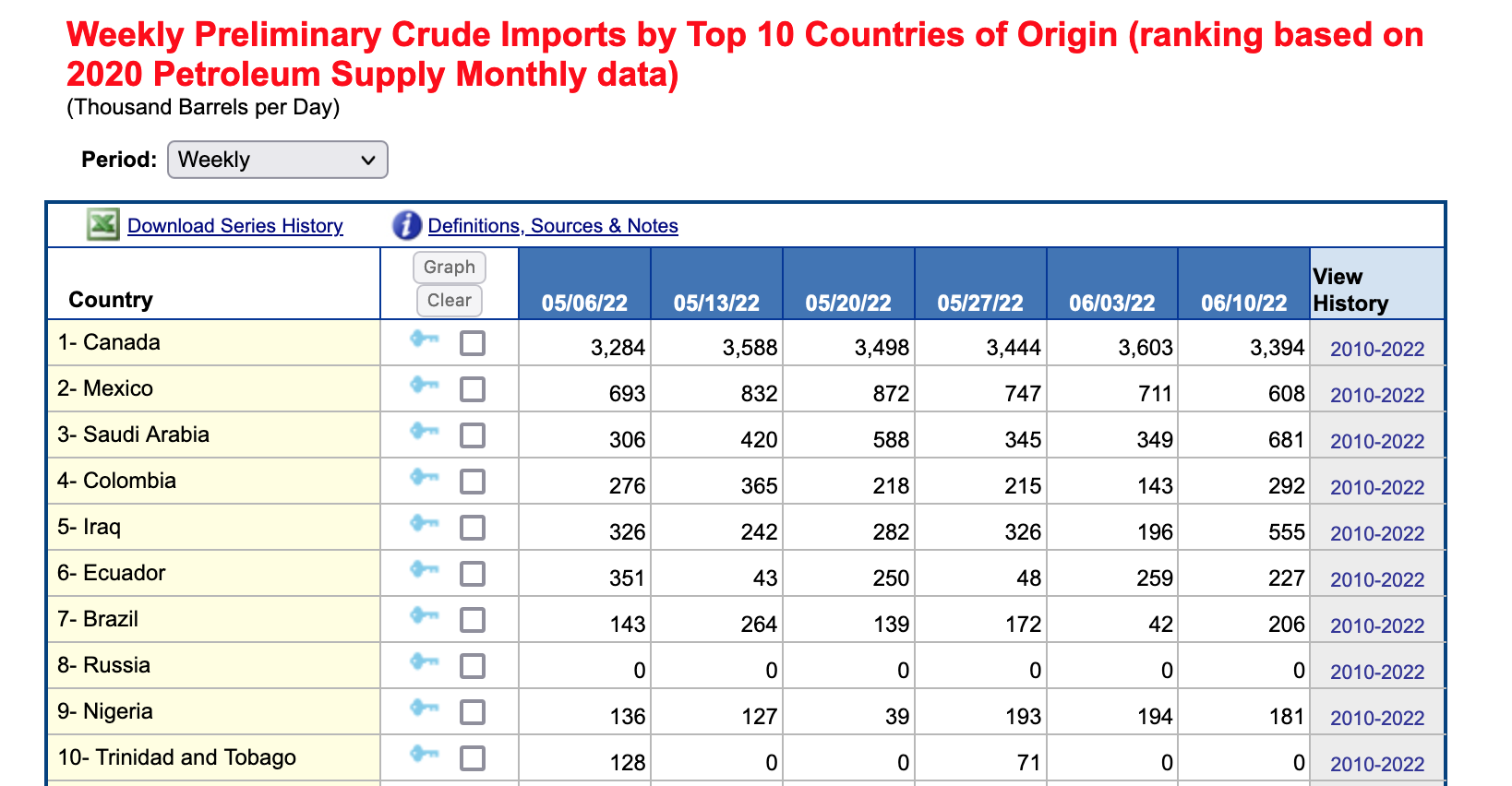 The second possibility is that Russia would not sell oil to anyone who tries this stunt. Recall that the UK is part of the G7 and does not plan to wean itself fully off Russian oil until year end, so they could see their supplies cut off. Again from the pink paper:

Energy executives warned that Russia could cut oil supplies sharply in response to any attempt to impose a price cap or make further cuts to gas exports to Europe.

Russia has been very careful about observing contracts when its counterparties are behaving, so I doubt it would cut gas supplies in response to oil shenanigans. However, Germany is threatening to expropriate Nordstream 2 pipeline assets. Russia’s special retaliatory economic measures, aka countersanctions against people who steal from Russia or Russians, are very broad in their application (as in they can also reach to trade/business partners of the perp). Or it could decide to impose a second round related to the Gazrprom Germania seizure or a host of other asset heists.

1 Russia’s economy is not as dependent on energy revenues as you might assume:

The Russian oil and gas industry’s share of the overall GDP is generally in line with the average 15-20 percent estimate for other major oil producers, Ekaterina Grushevenko, expert at the Skolkovo energy center in Russia, told RBC.

For example, the share of oil and gas makes 8 percent of U.S. GDP, a massive 50 percent of Saudi GDP, 14 percent of Norway’s GDP, 13.3 percent of Kazakhstan’s GDP, 30 percent of the GDP of the United Arab Emirates (UAE), and less than 10 percent in Canada, according to the expert.

2 With all the other sanctions on Russia, such as on tankers and on insurance on cargoes written by Western firms, it’s likely that no tankers are delivering oil from Russia to the US. But the lack of a formal embargo means oil sold out of storage or otherwise laundered is almost surely still being supplied.