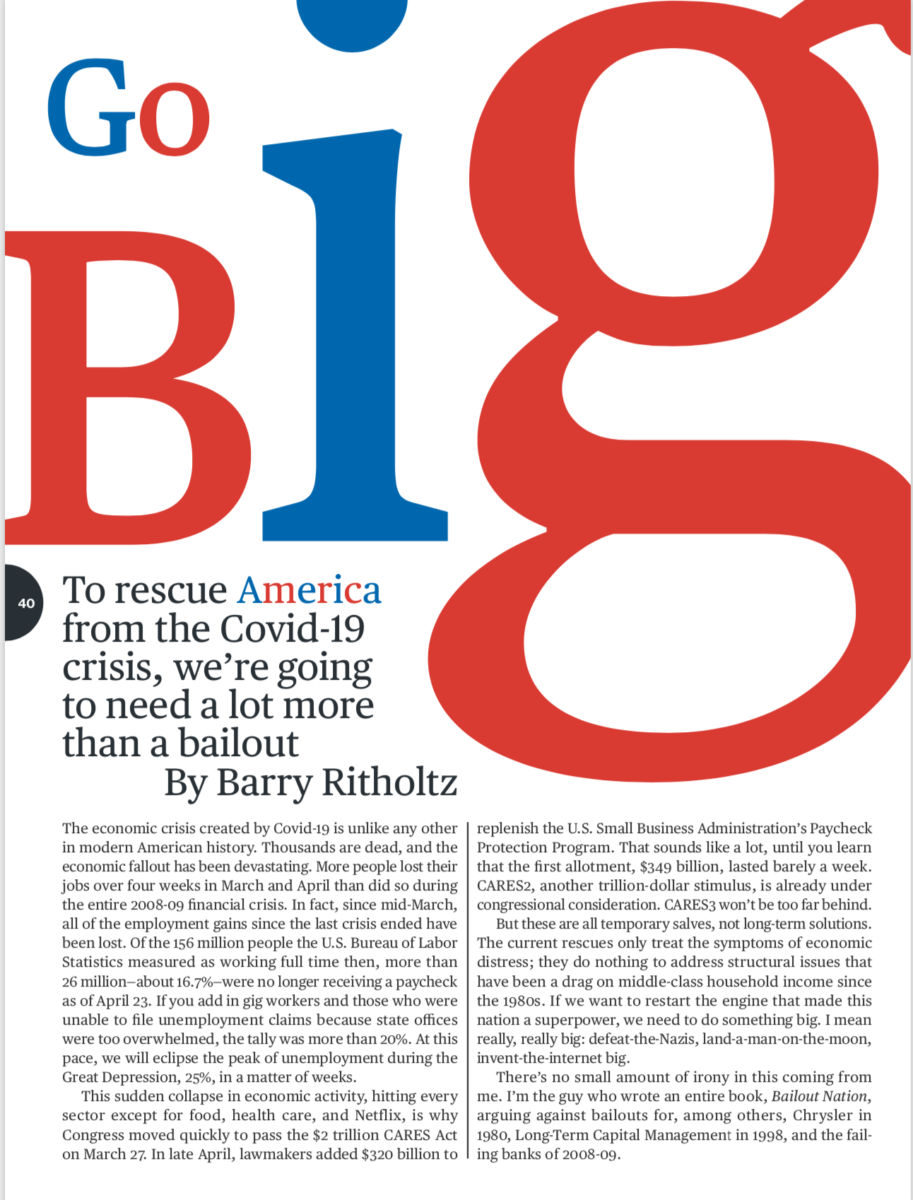 On Thursday, I mentioned my beastly BusinessWeek piece on economic rescues:  It’s Time to Go Big.

For those of you who don’t want to plow through the 2500 word opus, here is the reader digest version of 10 bullet points.

1. In America, the style of capitalism we do has always been a Joint Venture. It’s not socialism or communism, it is using the government to create broad platforms for business to build upon.

2. Consider the various industries that received their start with the assistance of Uncle Sam or the States: Patents and Eli Whitney’s Cotton Gin; Eminent domain, & railroads; Congress funded the first telegraph; States funded canals; NYS created the idea of municipal bonds by giving a monopoly on the Hudson River to the developer of a viable steam engine; the War Department led to radar; Navy limited radio frequencies, which led to auctioning and commercializing of radio. The Pentagon did Mainframe computer; Interstate Highway System + shipping industry; NASA = the integrated circuit; DARPA created the forerunner of  the internet; (full list here).

3. The common thread all of these industries had was the government was the earliest funder, the biggest risk-taker who had the longest time horizon. The innovation economy + the private sector built on these platforms. The private sector could not have created the patent system or radio or the internet but they could commercialize these and build new business models on these platforms.

4. This approach worked well for the first 200 years of U.S. history. The new sectors and industries created millions of middle class jobs; these were typically  well paying with good benefits.

5. For a variety of reasons, we abandoned a very successful model for one that is less successful for all of society.

6. From around the 1980s forward, the joint partnerships stopped. So too did many of the better middle class job creation. In their place was more of a bifurcated jobs market: Either you had an advanced degree and/or a STEM job, or you didn’t. The middle class began to shrink.

7.  Government became demonized, less involved. Asia, with a strong belief in robust industrial policy, captured much of the world’s economic gains. In the United States, the gains were increasing captured by the top few percent, especially in terms of tax cuts and stock option.

8. The Financial Crisis of 2007-09 was a mostly monetary response. It saved the banking sector, but also made everyone who owned commercial and household real estate and especially stocks and bonds even wealthier. People became made; Nationalism/populism expanded.

10. The lockdown revealed this in the starkest of terms. The attempts at replacing lost wages only served to remind us what we as a nation have not been doing for 30 years: Creating solid middle class jobs that one can sustain a family upon. My solution is to return to our long history of joint public-private ventures, like Railroads, . semiconductors, and the internet.

Thats the TL;DR version; if you are interested, the long version is here.