Yves here. Hoo boy. Housing has gone from rosy to rusty in remarkably short time. But this report is all about newly built homes. I assume the perennially-in-demand homes in good school districts aren’t taking much of a beating.

The confidence of builders of single-family houses, after the second-biggest plunge in the data last month, fell again in August, the eighth month in a row of declines, having gone downhill every month this year, “as elevated interest rates, ongoing supply chain problems, and high home prices continue to exacerbate housing affordability challenges,” according to the NAHB.

The NAHB/Wells-Fargo Housing Market Index has plunged across all four regions so far this year, but unevenly, with the index hitting the lowest levels in the Midwest and the West, and with only the South still being above 50 if barely. Note that in the West (red line), after still rising early in the year, the index has plunged since March from 91 to 42. Chart shows from December through August: 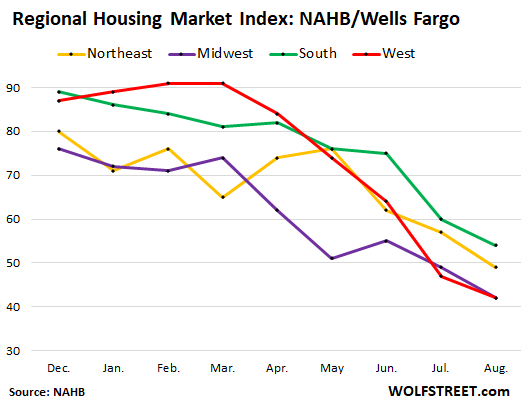 “And in a troubling sign that consumers are now sitting on the sidelines due to higher housing costs, the August buyer traffic number in our builder survey was 32, the lowest level since April 2014 with the exception of the spring of 2020 when the pandemic first hit,” the NAHB report said.

Traffic is an indication of interest by buyers. And with the headwinds buyers face, including sky-high prices and 5%+ mortgage rates, they’ve lost interest: 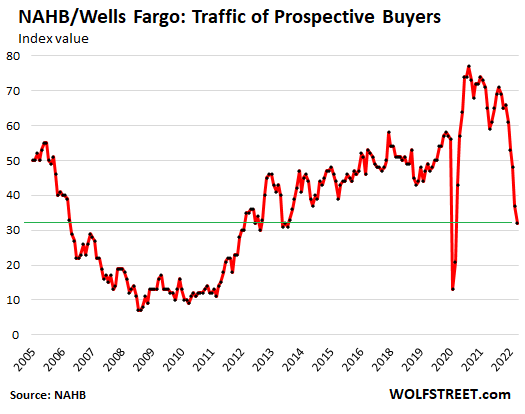 In terms of cancellations: Based on data from John Burns Real Estate Consulting, the cancellation rate homebuilders experienced in July, despite their efforts to limit them by cutting prices, spiked to 17.6%, out-spiking lockdown April 2020 (click on the image to enlarge): 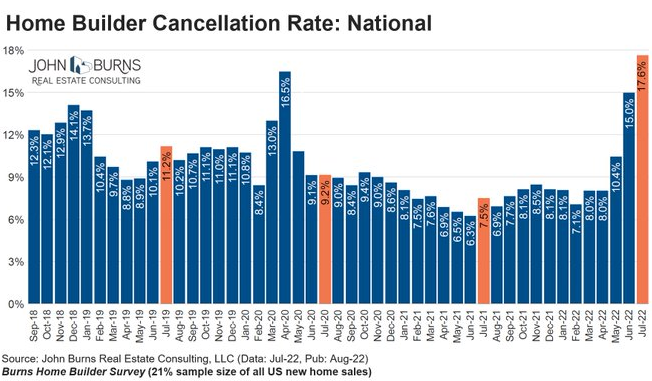 In terms of price reductions: They’ve started sooner and faster in California, Texas, and the Southwest, according to John Burns, for the three months through July. The price reductions include incentives: 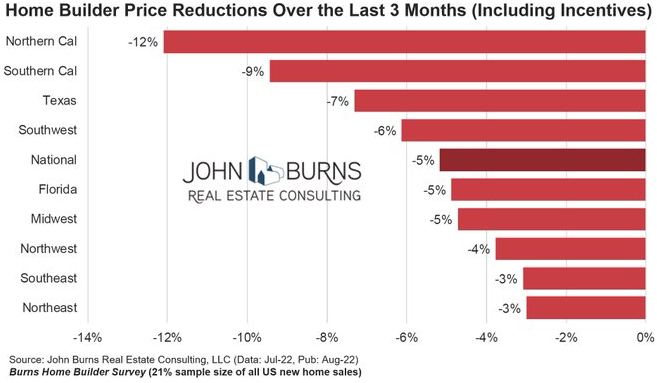 The Census Bureau reported earlier that the median price of new single-family houses sold had plunged by a combined 12% in May and June: 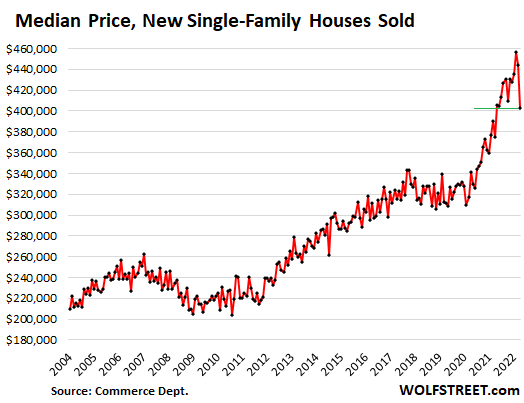 The NAHB index for current sales has dropped every month since February, and in August dropped 7 points, after the 12-point plunge in July, to a value of 57. A value of over 50 means that still more builders rated current sales as “good” rather than “poor,” and price reductions would certainly help.

Future sales look worse: The NAHB index for sales over the next six months fell by 2 points, after having plunged by 11 points in July, to an index value of 47, the second month in a row when more builders rated their future sales as “poor” rather than “good.”

Homebuilder stocks, despite the blistering summer rally, are down between 19% and 36% so far this year, including between 0.8% and 2.1% so far today (data via YCharts): 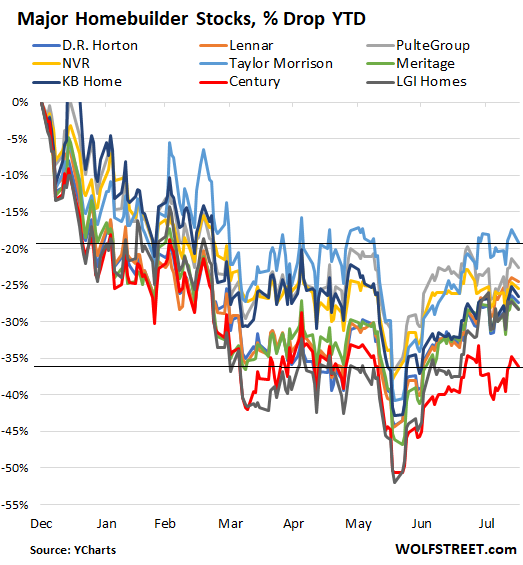