Yves here. I must confess to being a bit puzzled by this post. If I read Tom Neuburger correctly, his assumption seems to be that America’s form of government will need to end for oligarchs to maintain their privileged status. In fact, in the not-all-that distant past, when using the word “elite” to describe the existence of an overclass would get the user branded as a nutter, it was already well established that popular policies among ordinary Americans were not being enacted. Policies depicted as “progressive” meaning presumed to be well to the left of center, like higher minimum wages, strengthening Social Security, cutting our military spending, and (gasp!) taxing the rich have long gotten substantial majority or at least top plurality support (the reasons in variation are often a function of how the questions were stated and ordered).

So oligarchs are getting their way just fine under our nominally democratic system.

The question is whether oligarchs have much to fear as the Jackpot progresses. Probably to their health and quality of life, but not necessarily to their relative status. Recall that even during the Dark Ages, the nobility still enjoyed the trappings of high living, like fine china, luxury fabrics, and goods imported from the Orient.

Our rich overlords are so removed from ordinary people that they are unlikely to be targets. Consider a more mundane and grim example, a shooting in Tulsa. From the New Republic:

Last Wednesday, an aggrieved Oklahoma man bought an AR-15-style assault rifle. He paired the weapon with a semiautomatic pistol he had purchased from a pawn shop three days before and drove to Saint Francis Hospital, in Tulsa, where he killed Dr. Preston Phillips, a spine surgeon who had operated on him two weeks earlier. He also killed Dr. Stephanie Husen, a sports medicine physician; Amanda Glenn, a receptionist; and William Love, a former Army sergeant who was shot while holding the door to an exam room closed, trying to shield his wife from the killer.

Other stories stated that the shooter went to the second floor of the hospital, as in he bypassed other employees.

IM Doc knew Dr. Philips a bit and named him in an e-mail as a victim before the press reported it. From IM Doc:

That is the exact hospital I worked at while living in Tulsa taking care of a family member.

The name of the doctor killed is Preston Phillips. An excellent spine surgeon.

It appears to have been a disgruntled patient, although nothing for sure is known. I do not know who the other dead are.

He was an amazing guy and took wonderful care of the patients.

This led GM to discuss rampant health care corruption in another country, to the degree that patients have started attacking doctors….but the victims are most often ER doctors, who actually are not part of the grifting but are readily targets. GM added:

…why is it that in the US, where everyone is armed, the rampage shootings happen in schools, but you don’t hear about people going into a health insurance company office building or at the top floors of some of the major hospitals and gunning down everyone there? There are actual grounds for resentment and truly guilty people here (whether you are for or against the death penalty, the US has it, and the various execs in the healthcare industry have been quite deliberately committing mass murder on a grand scale for decades).

Why the mention of these executives? Because they are members of the 1%, not the 0.1%. Someone who is facing bankruptcy from surprise billing might indeed track down the C-level types who devised and implemented those policies…but they’d still be removed from the private equity kingpins who were the ultimate and biggest beneficiaries and almost certainly turbocharged their growth.

So that’s a long-winded way of saying I don’t see how the oligarchs face any real need to revamp the political order to preserve their privileges. And that sort of change runs the risk of precipitating unnecessary fights within the very top ranks. 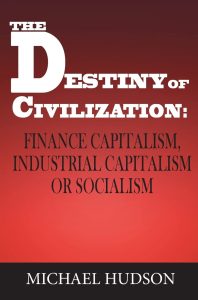 “The alternative to democracy is oligarchy. As Aristotle noted already in the 4th century BC, oligarchies turn themselves into hereditary aristocracies. This is the path to serfdom.”
—Michael Hudson

Consider the following from the blurb for economist Michael Hudson’s latest book, The Destiny of Civilization: Finance Capitalism, Industrial Capitalism or Socialism:

The book explains why the U.S.-China conflict cannot simply be regarded as market competition between two industrial rivals. It is a broader conflict between different political economic systems – not only between capitalism and socialism as such, but between the logic of an industrial economy and that of a financialized rentier economy increasingly dependent on foreign subsidy and exploitation as its own domestic economy shrivels. Professor Hudson endeavors to revive classical political economy in order to reverse the neoclassical counter-revolution.

In an interview with the German magazine ViER (quoted here), Hudson was asked to expand on these ideas. He’s asked: What is the conflict between financialized and de-industrialized countries like United States and the mixed-economies of China and Russia really about? And why does he say the world’s at a unique “point of fracture”?

Hudson’s response to this is worth quoting in full. He starts with information that contains few surprises:

Today’s global fracture is dividing the world between two different economic philosophies: In the US/NATO West, finance capitalism is de-industrializing economies and has shifted manufacturing to Eurasian leadership, above all China, India and other Asian countries in conjunction with Russia providing basic raw materials and arms.

These countries are a basic extension of industrial capitalism evolving into socialism, that is, into a mixed economy with strong government infrastructure investment to provide education, health care, transportation and other basic needs by treating them as public utilities with subsidized or free services for these needs.

In the neoliberal US/NATO West, by contrast, this basic infrastructure is privatized as a rent-extracting natural monopoly.

But his continuation contains a seldom-asked question, at least in mainstream circles (emphasis mine):

The result is that the US/NATO West is left as a high-cost economy, with its housing, education and medical expenses increasingly debt financed, leaving less and less personal and business income to be invested in new means of production (capital formation). This poses an existential problem for Western finance capitalism: How can it maintain living standards in the face of de-industrialization, debt deflation and financialized rent-seeking impoverishing the 99% to enrich the One Percent?

Hudson’s answer to his own rhetorical question?

The first U.S. aim is to deter Europe and Japan from seeking a more prosperous future [by preventing] closer trade and investment ties with Eurasia and the Shanghai Cooperation Organization (SCO, a more helpful way of thinking about the global fracture from the BRICS). To keep Europe and Japan as satellite economies, U.S. diplomats are insisting on a new economic Berlin Wall of sanctions to block trade between East and West.

For many decades U.S. diplomacy has meddled in European and Japanese internal politics, sponsoring pro-neoliberal officials into government leadership. These officials feel that their destiny (and also their personal political fortunes) is closely allied with U.S. leadership. Meanwhile, European politics has now become basically NATO politics run from the United States.

The problem is how to hold the Global South – Latin America, Africa and many Asian countries – in the US/NATO orbit. Sanctions against Russia have the effect of hurting the trade balance of these countries by sharply raising oil, gas and food prices (as well as prices for many metals) that they must import. Meanwhile, rising U.S. interest rates are drawing financial savings and bank credit into U.S.-dollar-denominated securities. This has raised the dollar’s exchange rate, making it much harder for SCO and Global South countries to pay their dollarized debt service falling due this year.

This forces a choice on these countries: either go without energy and food in order to pay foreign creditors – thereby putting international financial interests before their domestic economic survival – or [default] on their debts, as occurred in the 1980s after Mexico announced in 1982 that it could not pay foreign bondholders.

This choice for the Global South — to go without energy and food or default on debt — is little commented on in the West, partly because the choice is so new, an outgrowth of Ukraine War sanctions. But the problem is still real.

The rest of the interview deals with these problems, the one faced by Europe and the one faced by the Global South. There’s also this stark but true reminder that “national parliaments are now subservient to NATO, whose policies are run from Washington.”

How Will U.S. Oligarchs Win in the U.S.?

But note in the first quote above the even larger problem Hudson identifies: How can the West maintain living standards while also de-industrializing and impoverishing the 99%?

He answers it, indirectly, by talking about how the inflow of money from Europe and other U.S.-dominated countries like Japan keeps the rich in cash:

European economic shortages are a huge benefit to the United States, which is making enormous profits on more expensive oil (which is controlled largely by U.S. companies, followed by British and French oil companies). Europe’s replenishment of the arms that it donated to Ukraine also is a boon to the U.S. military-industrial complex, whose profits are soaring.

But the United States is not recycling these economic gains to Europe, which is looking like the big loser.

None of those profits is going to the people. Only the living standards of the “One Percent” are propped up. (By “One Percent” I mean the upper 10%, a group that comprises our actual oligarchs, plus all those well-paid souls who keep that ship afloat and its engines running.)

Which leaves us with the original question: How will our wealthy keep control if they keep impoverish voters? Hudson’s answer, implicit in a piece written earlier is stark:

“The alternative to democracy is oligarchy. As Aristotle noted already in the 4th century BC, oligarchies turn themselves into hereditary aristocracies. This is the path to serfdom.”

In the same piece he adds, “All this sounds like Rome at the end of the Republic in the 1st century BC.”

So how will our oligarchs do it — maintain control while impoverishing the governed? There’s really only one answer — by ending the republic, both its fact and pretense.

There may be other ways, but I can’t think of them.