Isolation can have a profoundly negative effect on mental health and wellbeing. Social networks of friends, families, and neighbours provide meaning to peoples’ lives and crucial support when times get tough. In low-income settings, much research has focussed on how networks can improve economic outcomes; for example, through insurance against income shocks (Townsend 1994, Munshi and Rosenzweig 2016), and the diffusion of technology (Banerjee et al. 2013). Above and beyond their impacts on economic well-being, women’s social networks are crucial determinants of women’s empowerment (Kandpal and Baylis 2019) and their ability to participate in social and political movements (Prillaman 2017). Social networks may also be critical in ensuring women have access to accurate information, particularly about topics such as contraception where frank mixed-gender discussions may be taboo (Mason and Smith 2000).

Despite the importance of female networks, many women worldwide face substantial barriers to creating and maintaining social connections. Rural India is a prime example. A crucial factor behind this is migration for marriage: newlywed women tend to move into their husband’s household, typically in a new village, after marriage, placing them far from their existing friends and family. Moreover, restrictive gender norms, which frown upon married women leaving their house and socialising freely, can make it hard for recently married women to create ties in their new community.

In a new paper (Andrew et al. 2020), we provide quantitative evidence on new mothers’ social networks in rural Odisha, an eastern state in India. We ask how many connections young mothers have and how this changes over time? What is the strength of young mothers’ connections? And, how does network size correlate with socioeconomic status (SES)?

In the paper, we document social ties of 2170 married women with young children living in 192 villages in rural Odisha. From 2015, we interviewed the same women measuring both the number and strength of their social connections every year for a total of four years.1 In each village we asked a sample of up to 12 mothers (representing one third of mothers with young children in the village, quasi-randomly selected and sampled so that the respondents were relatively geographically close to one another) whether they knew each other or not. If they did, we followed up with a series of questions about how well they knew that mother; for example, how long they had known her, whether they visited her in the last two weeks, or if they could borrow money from her. Figure 1 shows an example of such a network in one village at the start of our study. Each point represents a respondent, mapped using her GPS coordinates relative to the village centre, while the arrows represent social connections. 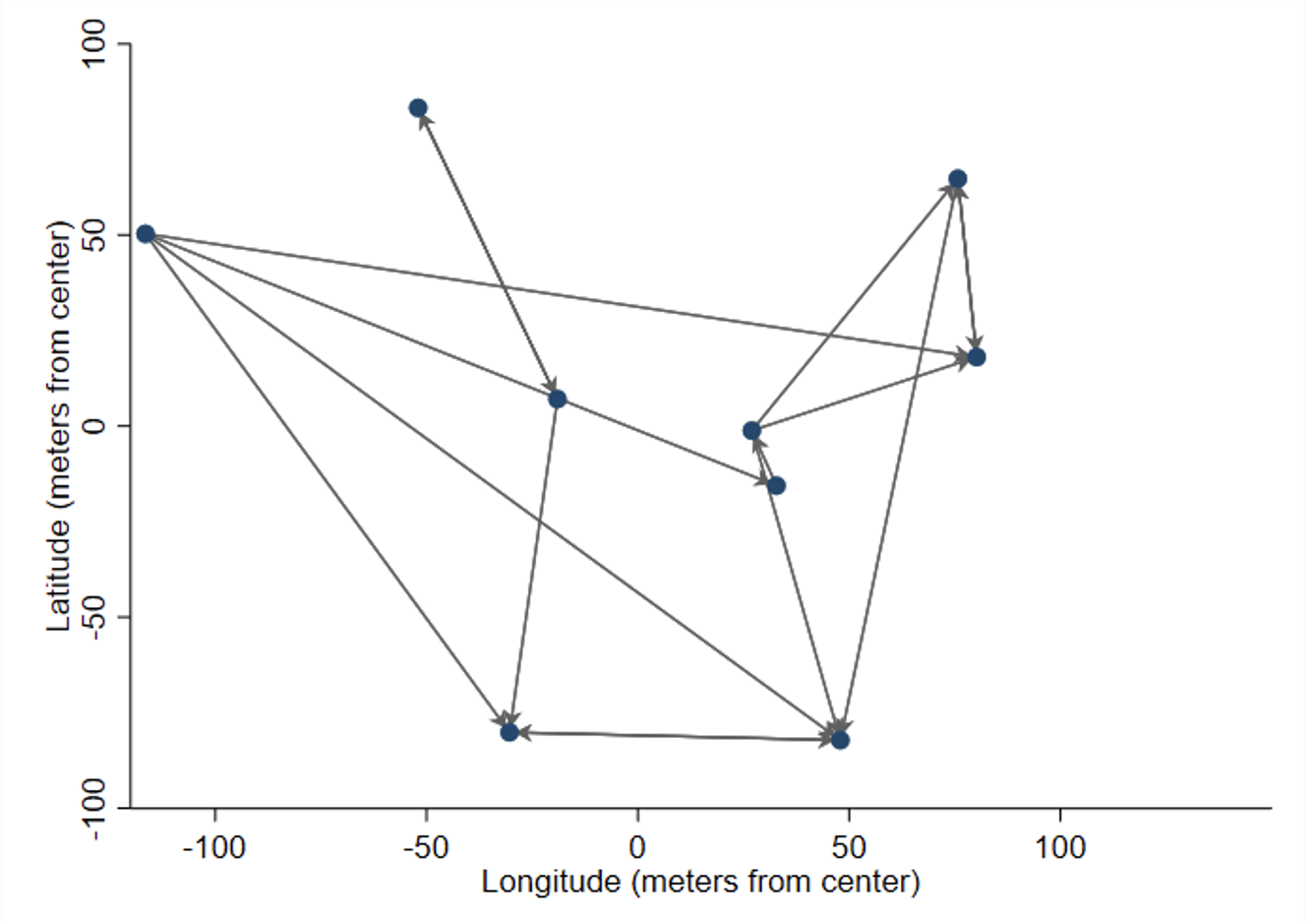 A striking feature of these networks is their sparsity. On average, in the first wave of our survey, mothers knew 1.4 other sampled mothers in the village, with 39% of mothers reporting knowing no other sampled women. Given that, on average, these women live around 240 metres from each other and in relatively small communities, this is a remarkably small social network. Even after accounting for the fact that we did not ask respondents about their connections to all other mothers in the village, we estimate that the average mother has on average 3.2 connections to other mothers with similarly aged children. As time passes these networks grow larger, but not by much. By the fourth wave of our panel survey in 2019, each mother knew on average 2.0 other sampled mothers in her village.

Socioeconomic status as a gradient of  network size

For both caste and wealth, we find that women with higher SES had more restricted networks than their less well-off peers. At the start of our study, dominant-caste women on average had around 0.6 fewer connections than women from more disadvantaged castes and tribes (SC/ST/OBC). As shown in Figure 3, this gap persisted and arguably grew over time, with dominant-caste women having 0.8 fewer connections by our last wave of data collection. 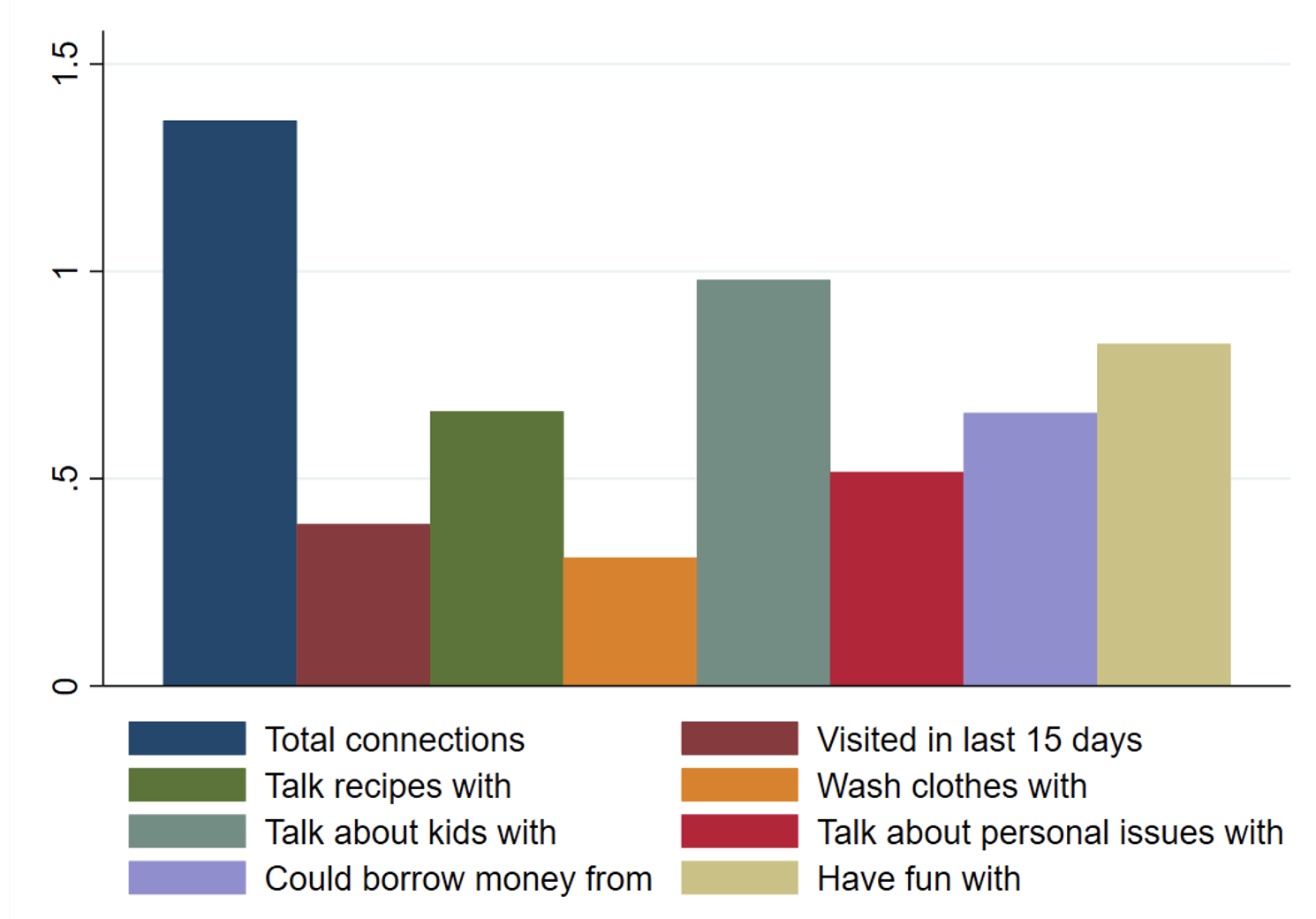 Note: Chart plots the average total number of connections reported in addition to the total number whom respondents report being able to do different activities with. 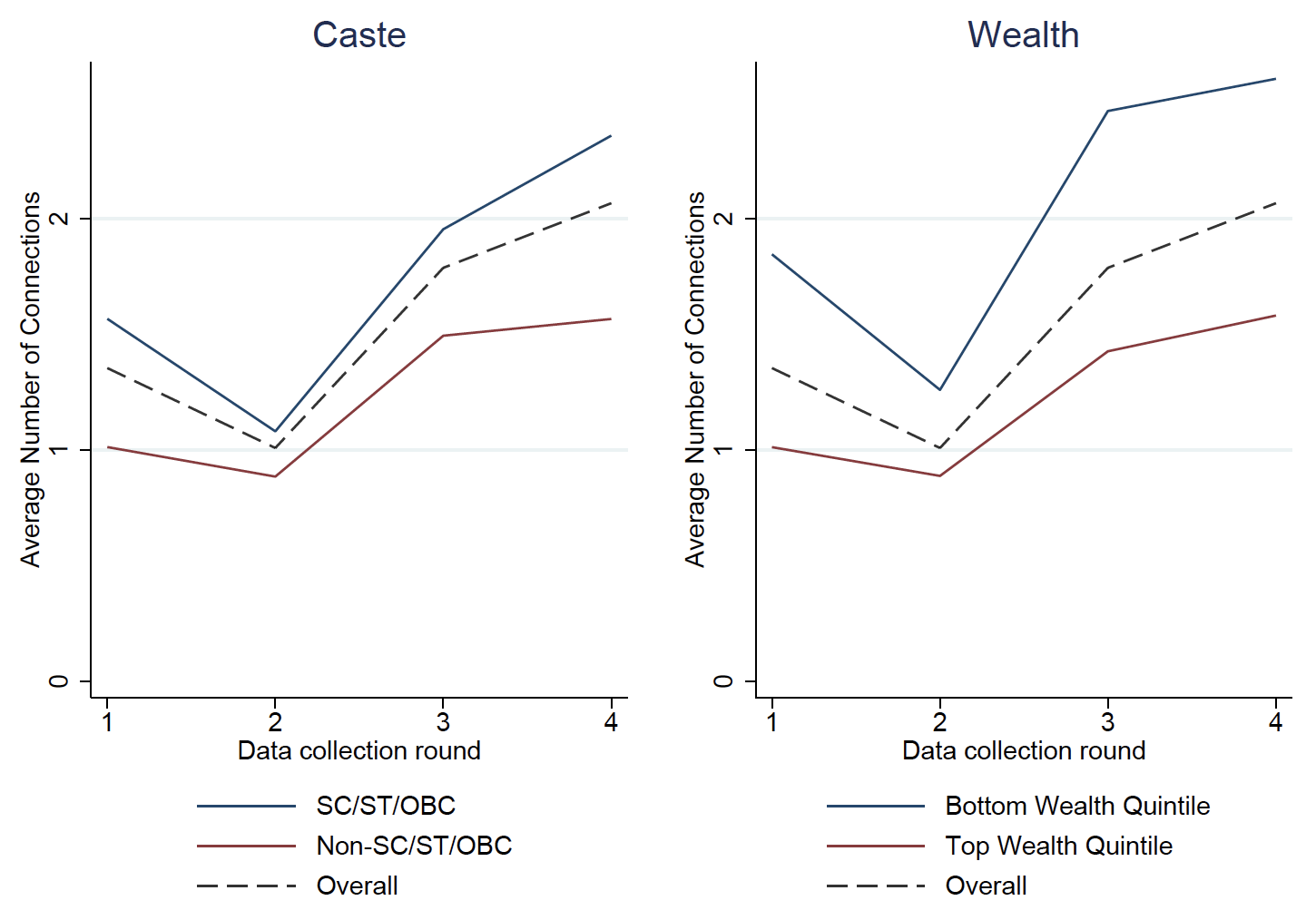 Note: Sample is restricted to the control group in waves after wave 1.

There is a similar gradient of connections with respect to wealth, with mothers in the top wealth quintile having 0.9 fewer connections than those in the bottom. This difference persists four years later, with the gap growing to 1.0 fewer connections. While these dimensions of SES are highly correlated, we find that even conditional on each other they maintain large independent relationships with network size. This suggests that both social and economic barriers contribute to restricting the size of women’s networks.

The SES gradients we observe might be driven by higher-SES women knowing fewer women within their own SES group, or by them knowing fewer women across SES groups. In practice, we show that most of the SES gradient in network size is attributable to higher SES mothers being less likely to know other mothers of their own group. These differences in within-group connectivity compose two-thirds of the caste gradient, and all of the differences in network size by wealth.

What drives higher-SES mothers to know fewer mothers, even in their own SES groups? We find that two factors associated with mobility – labour force participation and toilet ownership – are strongly correlated with network size. Mothers who are engaged in the labour force have around 1 more connection than those who don’t, and mothers with a toilet in the house on average have 0.8 fewer connections than their toilet-less peers. Both findings have intuitive explanations.

Participating in the labour market gives mothers the opportunity to meet more people and form social ties, breaking cycles of isolation. Toilet ownership makes it less likely that women will need to practice open defecation. Since in practice, many women travel in groups to defecate in the open, having a toilet at home removes women from this opportunity to meet their peers. As household toilet ownership is strongly correlated with wealth, this may go some way in explaining observed socioeconomic gradients in network size.

Young mothers in rural Odisha are extremely isolated, on average, with potentially important consequences for mental and physical well-being, access to services, and maternal empowerment. These networks display strong negative socioeconomic status gradients, with dominant-caste and wealthier women being much more isolated than their lower-SES peers. While networks grow larger as time passes, this process happens slowly and differences by SES persist.

In our analysis, we cannot truly disentangle the reasons why networks are more restricted for high SES mothers than low ones since networks are formed endogenously to serve social, political, and economic interests. However, our results are consistent with restrictive social norms being more affordable for higher income households. More evidence on how these networks are formed, how they change with income growth, how they causally affect outcomes, and how social programmes can alter them, is needed.

1 This sample was collected as part of an evaluation of various early childhood development interventions. See Grantham-McGregor et al. 2020 for details of the interventions and sampling.