Yves here. There’s been drinking-from-a-firehose level revelations from the Twitter files. Tom Neuburger goes though the latest batches, focusing on the most disturbing examples of Twitter subservience to censorship demands. These documents also show how troublingly cozy Twitter was with the CIA and FBI. 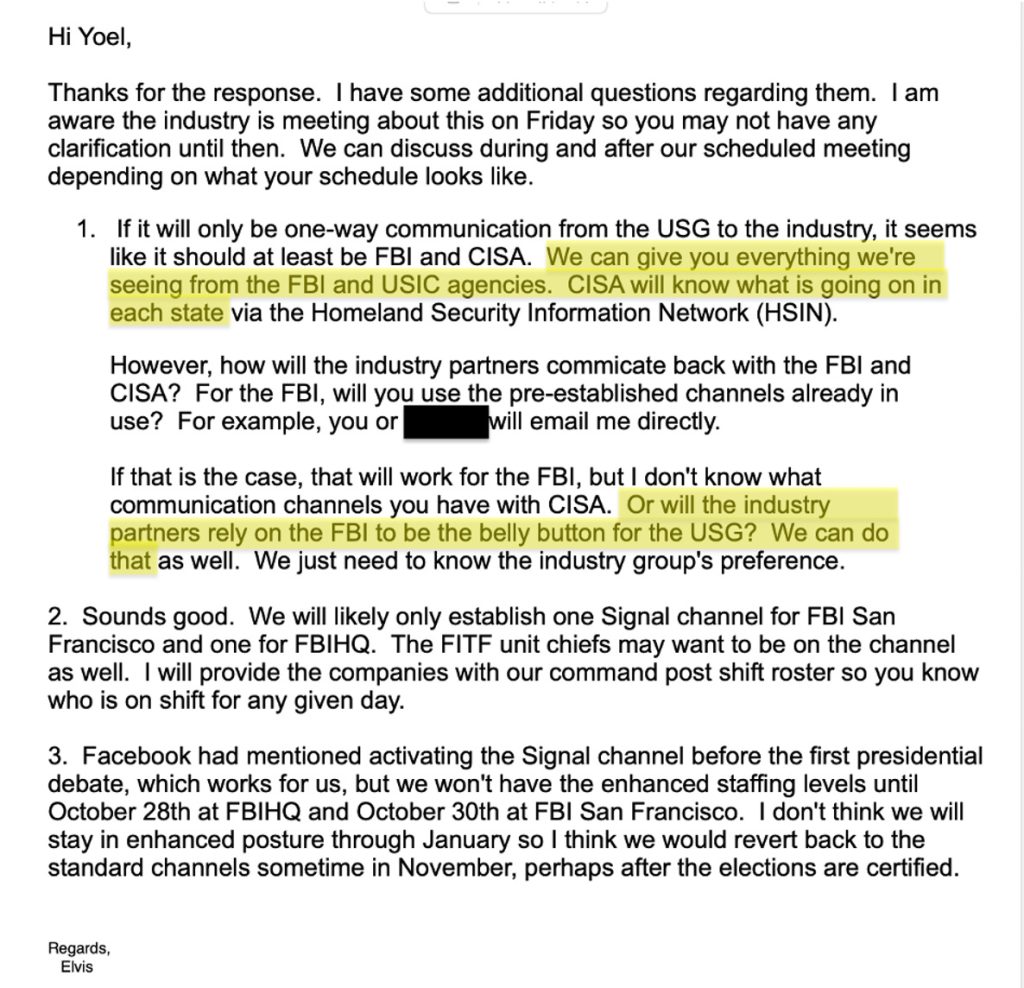 “When the government watches you twenty-four hours a day, you cannot use the word ‘liberty.’ That is the relationship between a master and a slave.”
—Chris Hedges, “America’s Theater of the Absurd”

Two more Twitter Files have dropped, both by Matt Taibbi. They should be considered together, as a set.

In addition to my summary, this piece contains links to the releases, brief descriptions, and two supplementary interviews Taibbi has given explaining them. These interviews add new information, so I suggest listening if this interests you.

‘Industry’ and the State: Partners in Crime

If you read these files through, and I hope you do, pay attention to how often the word “partner” is used.

The FBI refers to its “industry partners” in their communication to Twitter — meaning, I believe, social media companies in general. And Twitter executives frequently refer to “our partners at the FBI.”

So where does the state end and “industry” begin? I’m not sure I can tell you. I can tell you that a surveillance state is not a friendly operation. Consider the Chris Hedges quote at the top. To be constantly watched is to be constantly controlled. We’ve seen the watching, been watching it for years. Now we see one of the mechanisms of control.

There is, in fact, a word for when a government entangles itself with the activities of corporations. Consider Benito Mussolini in 1935, Fascism: Doctrine and Institutions, Rome: ‘Ardita’ Publishers (quoted here; emphasis mine):

State intervention in economic production arises only when private initiative is lacking or insufficient, or when the political interests of the State are involved. This intervention may take the form of control, assistance or direct management. (pp. 135-136)

To jump immediately to these files, click the links below. Discussions of previously released Twitter Files can be found here, here and here.

30. “REPORTERS NOW KNOW THIS IS A MODEL THAT WORKS”
This cycle – threatened legislation, wedded to scare headlines pushed by congressional/intel sources, followed by Twitter caving to moderation asks – would later be formalized in partnerships with federal law enforcement.

23. “BELLY BUTTON”
“We can give you everything we’re seeing from the FBI and USIC agencies,” Chan explained, but the DHS agency CISA “will know what’s going on in each state.” He went on to ask if industry could “rely on the FBI to be the belly button of the USG [U.S. government].

Links to all Twitter files can be found in the articles listed in the pulldown tab at the top of the God’s Spies main page: