I was browsing a book in my library by economist Frank Knight, “Risk, Uncertainty, and Profit.” It is a very early look at a favorite philosophical subject: “What is uncertainty?”

Knight was a professor teaching economics at the University of Chicago.1  Consider this excerpt from his book published in 1921 — more than a century ago : 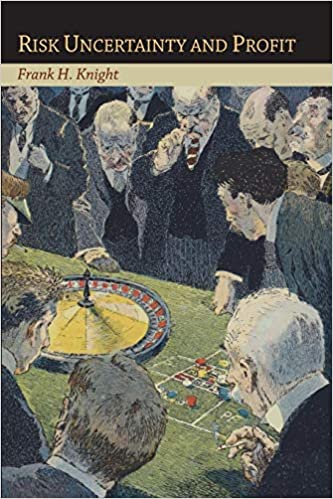 “Uncertainty must be taken in a sense radically distinct from the familiar notion of Risk, from which it has never been properly separated… The essential fact is that ‘risk’ means in some cases a quantity susceptible of measurement, while at other times it is something distinctly not of this character; and there are far-reaching and crucial differences in the bearings of the phenomena depending on which of the two is really present and operating… It will appear that a measurable uncertainty, or ‘risk’ proper, as we shall use the term, is so far different from an unmeasurable one that it is not in effect an uncertainty at all.”

What makes Knight’s distinction between “Risk” and “Uncertainty” so astute is the recognition that Risk is measurable. Making Risk a quantifiable concept gives it two important characteristics: First, it can be objectively assessed mathematically; secondly, risk can be hedged, which is important to businesses, consumers, and investors. (Airlines can hedge the price of jet fuel; portfolio managers can buy stock puts; consumers purchase home or auto insurance).

Described from a statistical perspective:

Risk: We don’t know what is going to happen next, but we do know the data set from which the outcome derives.

Uncertainty: We don’t know what is going to happen next, and we do not know what the data set or possible distributions looks like.

This is why I dislike the Uncertainty meme from a market perspective — we do know the full data set of possible prices.3  That is a useful definition to keep in mind when pundits describe markets as uncertain when what they typically mean is risky (often) or unknown (always). Misunderstanding this distinction leads us to the tiresome “The stock market hates uncertainty” cliché. Pundits may hate uncertainty — it makes them look foolish — but markets harbor no such bias. Markets thrive on uncertainty — it is their reason for being.

If Risk is really a measure of potential loss, what are we akshully discussing when we reference uncertainty? I suspect most misuses of this word are derived from the emotional moment. There are behavioral and cognitive aspects to this, as we shall see.

Since 2009, GoogleTrends of the word “Uncertainty” shows a distinct seasonality, peaking each year in September. What is behind this? We should be suspicious of the annual election cycle in the US as a cause — a distinctly tribal, emotional event.

Cognitive dissonance likely deserves some blame, too. Most of the time, we easily get away with fooling ourselves. But our “happy little bubble of delusion” is threatened once our self-rationalizations fail to convince. The Uncertainty trope arises when our delusions falter; when our false construct of reality is revealed as no longer resembling the objective universe. Thus, we are unhappily forced to recognize our own ignorance of the future:

“We are not so happy with the naked truth and prefer the comfortable lie. These brief instances where the facade fades, the curtain gets pulled back, the ugly reality becomes known to us. We get a glimmer of understanding our own lack of understanding. That’s when the grim reality of the human condition is revealed — and it scares the hell out of us…

The uncertainty trope arises not when things are uncertain — they ALWAYS are uncertain. Rather, it comes up during those all too rare instances when we mortals briefly acknowledge reality. When it passes, we all manage to go back to our previously constructed artificial reality.”

I have come to recognize that Uncertainty is more about our own fragile egos than it is about Risk. When things are not too frightening, we can happily go about our day. We do not need a perfect construct of the universe to safely cross a street without getting hit by a bus. Most of the time, our models need only to be “good enough.”

Richard P. Feynman observed, “The first principle is that you must not fool yourself and you are the easiest person to fool.” When the world suddenly becomes dangerous, when uncertainty reigns, that is when we realize just how much we have been fooling ourselves…

1. Knight was one of the intellectual founders of the “Chicago School of economics.” Nobel laureates Milton Friedman, George Stigler, and James Buchanan were students of Knight at Chicago; F.A. Hayek considered Knight to be one of the major figures in preserving and promoting classical liberal thought in the twentieth century. Paul Samuelson named Knight as one of the several “American saints in economics” born after 1860. (Sources: The Elgar Companion to The Chicago School of Economics. Ross B. Emmett 2010;  The Transmission of the Ideals of Freedom” Friedrich A. Hayek,  in the Econ Journal Watch. 9 (2): 163–69.)

2. You can make an argument that post 9/11 market closures incorporated uncertainty; I would disagree — it was always clear that markets would reopen, the unknown was the exact date.