I wrote a column yesterday (out tomorrow) on how to manage your investments when it is late in the market cycle. As these things so often go, when writing 800ish words to a specific topic, lots of other ideas and distractions come along.

Given the relative youth of the average RobinHood/Tiktok/Reddit trader, perhaps a few of these unused digressions, tangents and perspectives are worth sharing:

• Bull Markets Run Much Further Than Anyone Expects: One of the major tenets of famed Merrill Lynch technician Bob Farrell was that “Exponential rapidly rising or falling markets usually go further than you think.” I have found this is true, and to a shocking degree.

There are lots of comparisons between the current era and the 1990s dotcom implosion. Recall that then Fed Chairman Alan Greenspan’s now infamous Irrational Exuberance speech in 1996. Had you sold your tech stocks the next day, either individually or en masse, you would have left a lot of money on the table: The Nasdaq QQQs rose another 124.6% post Greenspan speech. 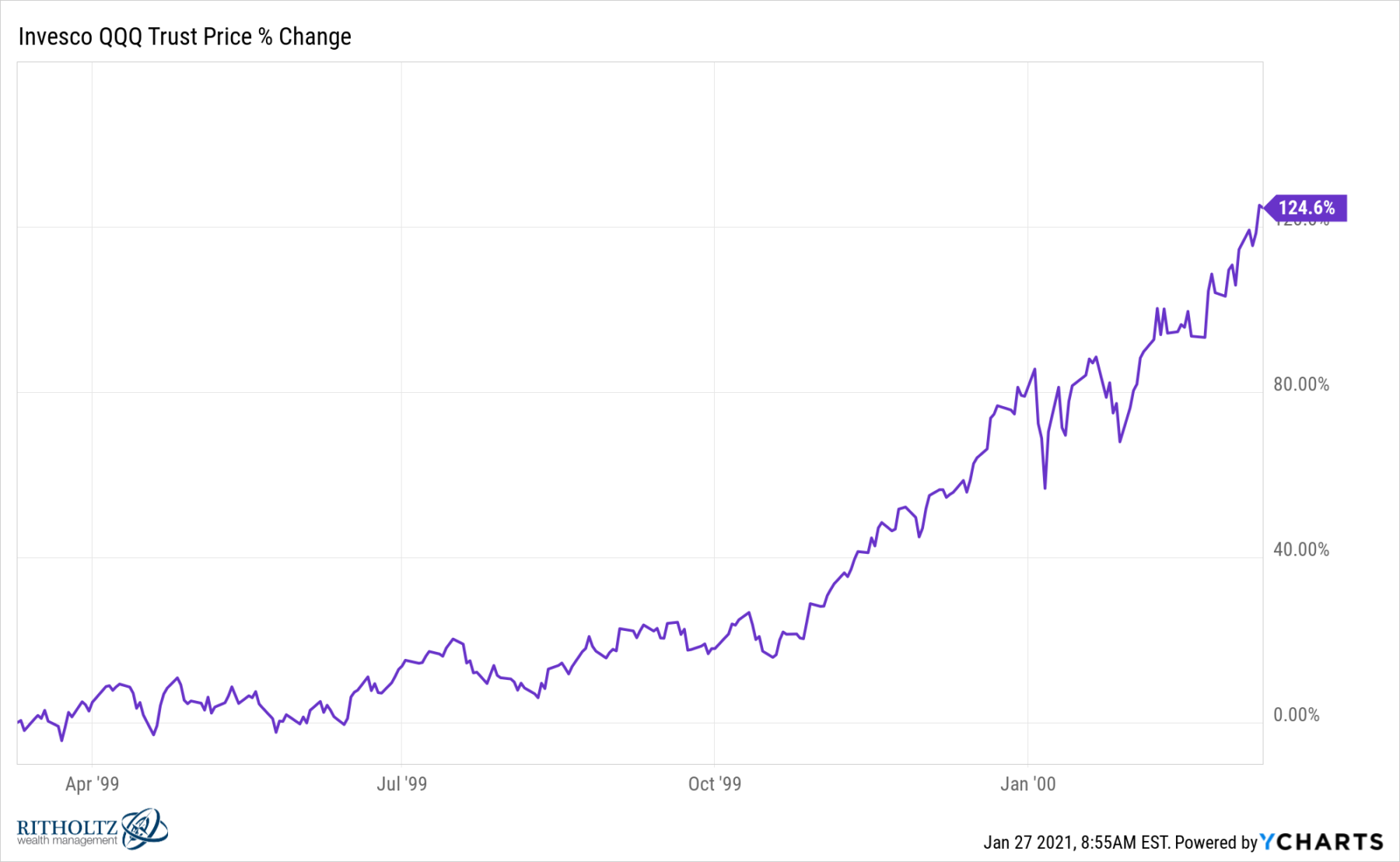 • FOMO YOLO COVID STONKS: Finding historical parallels is all but impossible to the pandemic ground hog day, circumstances: Stuck at home, the usual in-person socializing non-existent, much of our favored live entertainments unavailable.

What might be driving some of the behaviors we witness are very clever, potentially destructive algorithms “designed to funnel you into the most extreme, most dopamine-driving financial ideas.” Whether it is Facebook or TikTok, Reddit or Robinhood, the Gamma algo is different this time.

• Speculation versus Systemic Risk: We should pay attention to two important but very different kinds of risks: The pockets of speculation that send otherwise overlooked or undervalued or even worthless stocks soaring higher, and the risks that threaten to the entire economy.

Distinguish between the two when you are engaging in market commentary to say nothing of making broad macro trades.

When a literally worthless stub of a bankrupt company like Hertz Global Holdings (HTZGQ) soars due to traders, the risk is that those people may lose some or all of their money. The same is true for a turnaround story like Gamestop (GME) or AMC Entertainment Holdings (AMC) or whatever the Stonk of the day is.

On the other hand, when through the miracle of securitization, the entire financial system becomes festooned with defaulted junk mortgages, you have a real problem.

• What Don’t We Know: Consider the universe of things that we do not currently know today about this market & economy but will understand with great clarity 5-10 years from now. Is this a bubble? When will the market crash? How will the pandemic end? Will there be another US insurrection? What other surprises await us?

What we are incapable of answering those questions today (with any degree of confidence), but they will look obvious in the future. Worse, our hindsight bias will allow us to convince ourselves that we knew the answers all along.

• And in the End . . . How will all of this end? I have a high degree of confidence in this answer: The same way it always does.

There will be tears, massive losses by some and a big gains by handful of others. There will be lives ruined and lessons learned among the claims of a rigged market, insider trading, and fraud. Maybe even some people will go to jail. As Wall Street runs red with proverbial blood, a few clever bastards will notice the “generational buying opportunity” — the fourth such entry point over the past 20 years.

And, we won’t have any idea when that will be — it could be starting today, or just as likely, in 5 years.

Your goal throughout this is to survive with enough capital intact to take advantage whenever that opportunity presents itself . . .

Previously:
What Does the Longest Bull Market Mean? A Debate (August 29, 2018)

For Better of For Worse, This is a Young Person’s Market Right Now (Ben Carlson, January 26, 2021)

The End: Perhaps the finest two minutes and twenty-one seconds to ever officially* end an album.

* The hardcore fans know why I say “officially.”

Previous Article
COVID-19 Has Exposed the Fragility of Our Food System—Here’s How We Can Localize It
Next Article
Five Books for Shakespeare Lovers, or Those Who Want to Be: Doorways In

Five Books for Shakespeare Lovers, or Those Who Want to Be: Doorways In
January 27, 2021