Readers: Happy New Year, and many more of them! –lambert

‘I had to do it to save everyone:’ Letter solves school smashed window mystery – and reveals a snowstorm hero Sky News

What if the dinosaurs hadn’t gone extinct? Why our world might look very different The Conversation

The End of Financial Hegemony? New Left Review. Well worth a read.

How do tidal marshes store carbon? Soils Matter, Get the Scoop!

The Great Southwest Meltdown Of 2022 Seat 31B

Dogma, Hubris, and the Forgotten Lessons of SARS-1 (video) Mario Possamai, ISRP Respiratory Protection, YouTube. Fascinatingly, in SARS-1, collaboration between infectious disease and occupational health and safety departments led to a contained outbreak in Vancouver, BC via the application of the precautionary principle (contrasted to a debacle in Toronto). No lessons learned by Bonnie Henry! And none during SARS-CoV-2 by the infectious disease community in Canada, which clung to droplet dogma with a death-grip, there and at WHO. 57:13, but grab a cup of coffee, it’s a must-listen, and there’s much more than I’ve sketched here.

A little masterpiece of badness from the CDC (MN): 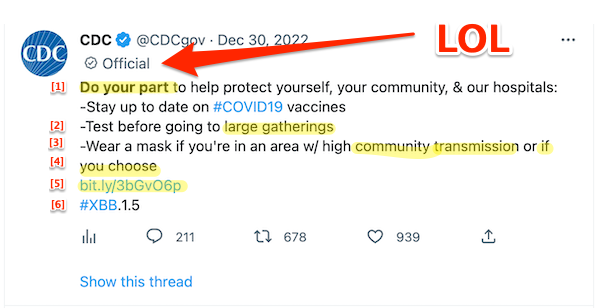 [1] Fine, fine, but the collective messaging here contradicts the individualist “if you choose” message at [4].

[2] The issue is not transmission at “large gatherings,” but, since #CovidIsAirborne, at venues that are closed, crowded, and close-contact (the 3-Cs).

[3] Has CDC abandoned its (“green map,” bad) community levels guidance, and replaced it with (“red map,” good) community transmission? Big if true. If so, “That means the CDC now recommends universal masking for **71%** of counties in the US, instead of only 9%.” However, the entire tweet is so sloppy and bad it’s hard to say, and in addition there’s no link.

[4] Great, back to “personal risk assessment.”

[5] The CDC site is down — so indicative the CDC can’t even manage a website — so I can’t read this link, but it’s not to the red map, or the green one, either

Let’s review! We have mixed messaging, lethally bad advice on airborne tranmission, confusing guidance, a broken website, with an inexplicable hash-tag to wrap it all up. This is our flagship public health agency, the finest in in the world, the Centers for Disseminating Covid [slow clap].

CDC reports a new strain of omicron taking over in the U.S. NBC. This is XBB.1.5, which we’ve been eying for the same time. At the same time, these are CDC (“Nowcast”) projections, so “reports” in the headline is a bit deceptive.

Will the US plan for testing travelers from China help stem the spread of COVID? ABC. No. Sniffer dogs work. We had more than a year to get them into our airports. Of course, the Biden Administration squandered the year.

Woman, 36, almost passed out while walking. She was in heart failure due to COVID-19 Today. Note the source.

Surveillance for SARS-CoV-2 and its variants in wastewater of tertiary care hospitals correlates with increasing case burden and outbreaks Journal of Medical Virology. Wastewater from three hospitals. From the Abtract: “Total SARS-CoV-2 RNA levels in wastewater increased in tandem with total prevalent cases.” So, a good proxy?

Nasal Vaccines Are Here The Atlantic

COVID Vaccine Hesitancy and Risk of a Traffic Crash The American Journal of Medicine. n = 11,270,763. “Coronavirus disease (COVID) vaccine hesitancy is a reflection of psychology that might also contribute to traffic safety…. These data suggest that COVID vaccine hesitancy is associated with significant increased risks of a traffic crash. An awareness of these risks might help to encourage more COVID vaccination.”

Digitisation poses new risks to junta critics and is entrenching discrimination Frontier Myanmar. Yes, that’s why the junta is doing it. That’s why they’re all doing it.

How the West Failed Bosnia The Nation

New Year Address to the Nation President of Russia

More #Ukranian soldiers telling their president that they are coming for him and all the other politicians if they can only survive this. pic.twitter.com/S30gKpdtAR

Patriot to Ukraine: What Does It Mean? Center for Strategic and International Studies. “Training courses for Patriot operators and maintainers normally take many months. The PATRIOT system repairer course, for example, takes 53 weeks. Others are not quite so lengthy. The fire control operator course is 20 weeks. The launch system operator course is 13 weeks. Ukraine could save time by sending trained air defenders—for example, troops trained on the S-300 system, which Ukraine has operated for many years. Nevertheless, there is a lot of learning to do before Ukraine will have a functioning Patriot system on the ground. It is possible that the Ukrainians have already begun to train on Patriot in anticipation of a possible future transfer.” (This CSIS article also seems to have a Congressional Research Service report wrapped around it.) Concluding: “The decision to send a battery to Ukraine is therefore as much an expression of political commitment as it is a boost to Ukraine’s air defense capability.” So, performative?

Peru: The Coup Plot Internationalist 360°. Lots of names, no links. Maybe some Peru mavens in the readership can comment.

Social media as an incubator of personality and behavioral psychopathology: Symptom and disorder authenticity or psychosomatic social contagion? Comprehensive Psychiatry

She signed her son up for a tennis program where officers volunteer. He was put in handcuffs. WTVR

‘So noble, so kind’: Pope Francis leads tributes to Benedict XVI Guardian. Case for the prosecution; for the defense.

A Charity Tied to the Supreme Court Offers Donors Access to the Justices NYT (ctlieee). Commentary:

BREAKING: NYT reports a Supreme Court “charity” took $190,000 in secret donations from @Chevron when the company had cases (including Ecuador) pending before the justices. Other corporations also donated.

Activism and Apathy Are Poisoning American Politics The Dispatch

Travel nurses took high-paying jobs during Covid. But then their pay was slashed, sometimes in half. NBC

A Theory of Ex Post Rationalization (preprint) (PDF) arXiv. “Classical economic theory rules out rationalization. It assumes that people make forward-looking choices according to fixed preferences, rather than adapting their preferences to rationalize past decisions. Introspection, common sense, and psychological research all suggest that the classical approach omits a key aspect of human decisionmaking.” 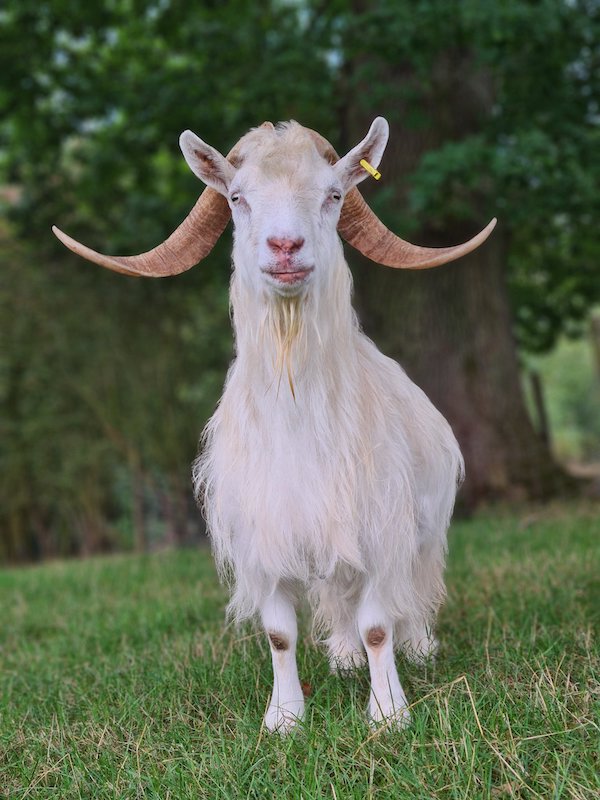 An extra beaver video for anyone hanging out on Twitter on New Year’s Eve. This beaver was sniffing around on the frozen part of the beaver pond to see if there was anything worth eating. The ice broke under her on the way back in. 😀😀 #beavers #animals #winter pic.twitter.com/FEd6RqHAxN

Breaking the ice for the New Year!