Wow, I forgot that I said this months ago. It’s definitely even more apparent now. Not tsunamis, rising sea level with high and low tide is how I view it at this stage. The variant soup is not the same as one wave/one variant was before. https://t.co/hk1P8WnLtt

Eating One US Fish Is Equivalent To Drinking a Month’s Worth of Contaminated Water, Study Finds CBS. Eeew!

‘Extinction crisis’ of sharks and rays to have devastating effect on other species, study finds Guardian (Kevin W)

Europe’s gas emergency: A continent hostage to seller prices The Cradle (guurst). A departure from high fives due to recent gas price falls.

The Failure of Maneuver: The Great War Big Serge

🇷🇺🇺🇦🇺🇸🇪🇺”US has formed a coalition of almost all European countries and is waging war against Russia through Ukraine,” – Sergey Lavrov

West adapts aid to Kiev, expects it to ‘succeed on the battlefield’ — Blinken: The US top diplomat stressed that the Western military aid to Kiev started “months before the Russian aggression” TASS (guurst)

A War Crime In The Making! @LaraFriedmanDC speaks to @FranceskAlbs the @UN’s Special Rapporteur reporting on human rights in OPT and Israel’s plan to forcefully remove more than 1200 Palestinians from their homes in #MasaferYatta#SaveMasaferYatta https://t.co/sbePmDi8Bf pic.twitter.com/CrFje2aGd6

What the Jan. 6 probe found out about social media, but didn’t report Washington Post (furzy)

The Wall Street Journal is reporting that the DOJ declined to have the FBI conduct searches and instead allowed uncleared private counsel to do so. If true, it is a level of accommodation that would make a Kardashian
blush.https://t.co/bngjHpEsDV

White House counsel’s office says there are no visitors logs at Biden’s Wilmington home CNN. Kevin W: “What about the logs of the Secret Service protection detail?”

In her will, Ivana Trump left her former nanny a $1 million condo — and her Yorkshire terrier, Tiger Trump — and nothing to ex-husband Donald Trump Business Insider

REPLY IN SUPPORT OF PLAINTIFF’S MOTION FOR CLARIFICATION Huddleston v. FBI, Eastern Court of Texas (Chuck L). You don’t have to read far to find:

After years of denials, the FBI has finally admitted that Seth Rich is directly linked to the “hack” of the Democratic National Committee email servers in 2016.

How DEI Is Supplanting Truth as the Mission of American Universities: An obsession with Diversity, Equity and Inclusion threatens students, professors, and the very credibility of higher education in the U.S. John Sailer, Free Press (EM)

Our Migration to Rumble and Locals Glenn Greenwald. Linked to by Lambert yesterday with effectively no comment. I assume I am in a microscopically small minority, but I hate that so many places want to get my e-mail address as a condition of seeing their content (I have become a huge fan of archive.ph). Walled gardens, even with what look like low walls, are bad! And I don’t like that I became a supporter at one place and now have to give my e-mail address to a second place.

Microsoft To Cut Thousands of Jobs Across Divisions Reuters

Why Mark Zuckerberg Should Face the Threat of Jail Bloomberg (furzy)

I had intended to send more photos, but my household is still unsettled.

However, yesterday I was at a good release of a juvenile bald eagle (via Centre Wildlife Care) and had some interesting photos. Attached are the first two that I’ve processed.

The first is from the exercise cage (in which any eagle is kept a few weeks in order to gain wing strength before a release). I named the eagle (a female) Athena, since she was both determined and focused.

The second photo is at the release site. Some eagles hesitate before leaving a crate. Athena was rocking her crate back and forth in her eagerness to leave. The moment the door was opened, she was out in a flash. The photo is of her zooming past me. 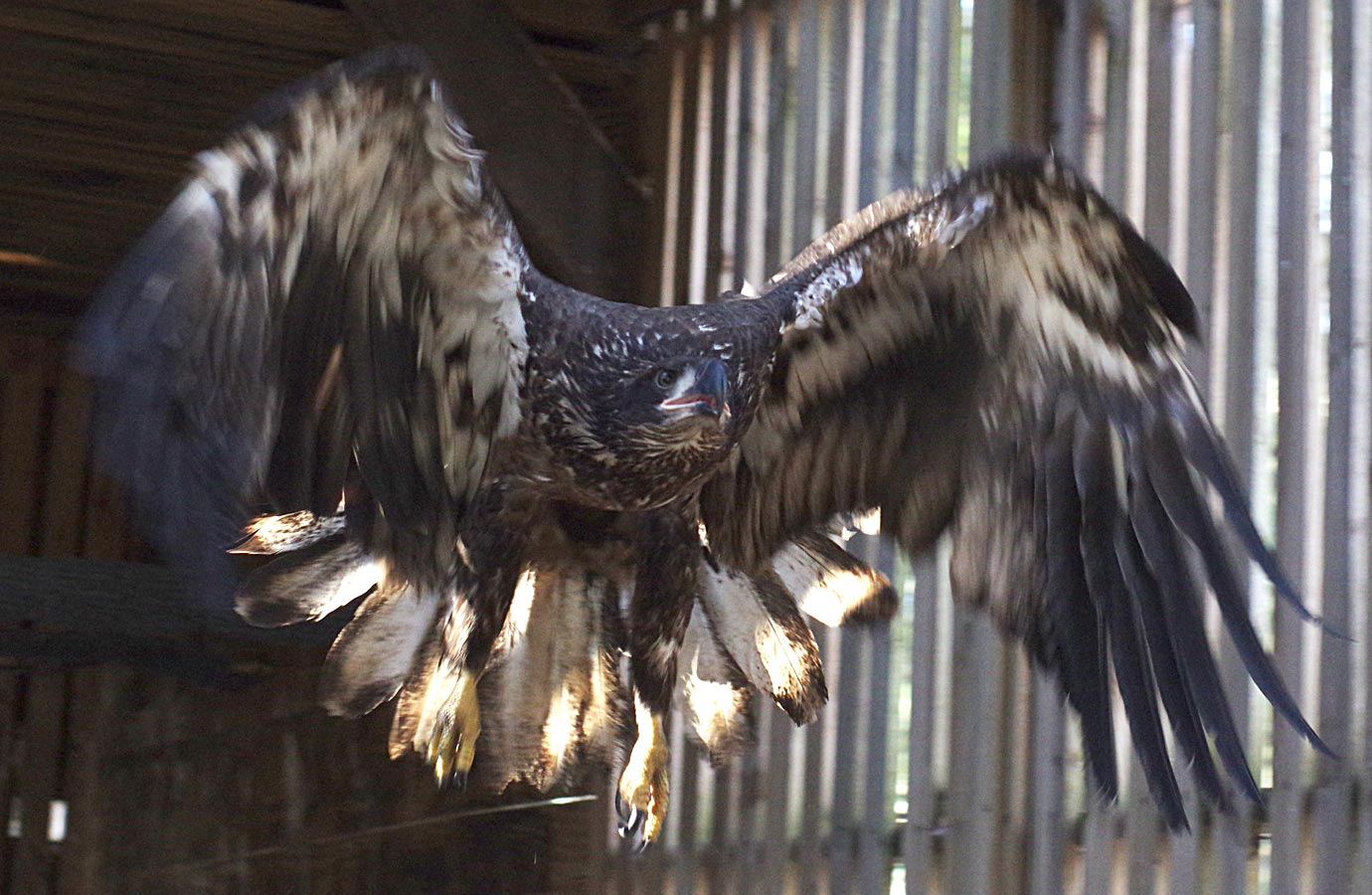