Scientists untangle mystery of naked giant chalk sculpture in England — with the help of some snails ZmeScience (Dr. Kevin) 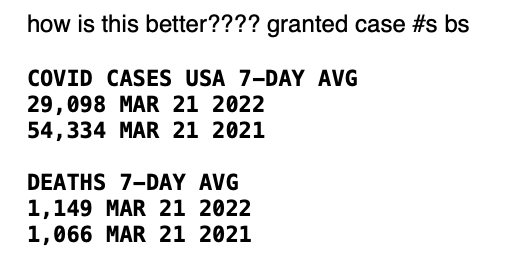 Not So Cold New Cold War

Larry C. Johnson: “The Ukrainian Army Has Been Defeated. What’s Left Is Mop-Up” Mike Whitney, Unz Review (Li). As we said in our post yesterday, save that the mopping-up could take a while, since the forces near Kiev need to be taken out of action. But a very pointed take and extremely critical of MSM/official spin. Whitney often writes at Counterpunch. The venues for realist takes in the US look to be very limited.

What the ‘chattering classes’ of Russia are talking about: update Gilbert Doctorow (guurst). Cheery news that Poland is thinking of moving troops into Ukraine, which Biden looks to be encouraging. Since that Kinzhal missile is continuing to be A Topic, from Doctorow’s wrap of Russian political shows:

….the American views to be demolished were those of the President and of the Pentagon commenting on Russia’s use this past week of its hypersonic missile Kinzhal to attack a military target in Ukraine. President Biden was quoted as saying that he saw nothing special about the Kinzhal other than speed, that its warheads were the common variety. The Pentagon was quoted as saying that the Russians “appear” to have fired their Kinzhal in Ukraine, which would be a wasted effort for the given target.

Nikonov’s guests pointed out that the target of the first Kinzhal strike was a “nuclear attack hardened” structure 60 meters underground and protected by reinforced concrete dating from Soviet days. Inside this bunker were Ukrainian missiles and other munitions of high value. In other words, thanks to the incredible energy of mass and speed, the Kinzhal using what they characterized as one of its weaker potential conventional, as opposed to tactical nuclear charges could destroy a target otherwise considered protected against a nuclear armed ICBM. Nothing special about this weapon system, eh?

The Return of the Hawks Sohrab Ahmari, Compact (Li)

US fighting Russia ‘to the last Ukrainian’: veteran US diplomat YouTube (b1whois). Chas Freeman and Aaron Mate. This is interesting but my trust in Freeman’s reading tanked at 5:18 when he suggested China might be mediating, which is supported by absolutely no evidence and contradicted by numerous statements by Chinese officials and official organs, starting with Xi himself to Biden: “He who tied the bell to the tiger must take it off.” So it’s not clear Freeman is paying close enough attention to have a good view. But he does offer important historical perspective.

The “Aleppo Playbook” is nothing but bullshit propaganda Turcopolier (resilc)

CW: woman tied to a pole.

The green paint signifys Russian speaker. They call the Russians Orcs hence the green paint. You won’t see this on western msm. pic.twitter.com/pGUIhfcAAy

Cracks in the mainstream narrative on the Ukraine war wide enough to drive a tank through Gilbert Doctorow (guurst). Oof, key factoid:

The militants are still holding more than 100,000 residents [in Mariupol] hostage and shooting anyone trying to use the humanitarian corridors opened to them by the Russians.

Half Mariupol Under Russian Control, Zelensky Open to Talks on Crimea, Donbass, US Sanctions China Alexander Mercouris. The early section, on Gulf State nations meeting with Assad, the BoJo meetings flop (I did link to a story on it when it was being set up) and an India-China meeting, is telling. Later he reports on the action in the Russian financial markets as they are being reopened, and then turns to the US escalating v. China less than a week after Biden telling Xi the US wanted good relations with China. Freeman may be sound on a high level but be careful on his command of fine points,

Oil risks further surge in price after pipeline damage, experts warn RT (Kevin W). Hoo boy. I assume this is legit but if not, it would fit the profile of the sort of “passive-aggressive sanction” I mentioned earlier.

Los Angeles gas prices hit average of $6 Fox Business. Kevin W: “I am only sending this link as it has a simple map showing average gas prices by State.” Moi: I’ve been privately predicting gas at $6 a gallon by the end of April, $7 in high cost/high tax states. That looks like a more obvious call in light of the Caspian pipeline event.

Chevron, Waiting It Out in Venezuela, Tells U.S. Now Is the Time to Pump Oil Wall Street Journal (Brunches with Cats)

The Daily Beast Is Trying To Get Me Killed Gonzalo Lira. “Just because you are paranoid does not mean they are not out to get you.” This chat is way too long but Lira’s headline point is correct.

Latinx’ and ‘Defund the Police’ Are Driving Latinos to the G.O.P. New York Times (resilc)

Expanded Child Tax Credit Would Pay Huge Dividends: Report Yahoo (furzy). But our Dems don’t believe in helping people…you have to earn it or at least be “deserving poor.”

While you were busy watching the war, life in America goes on as usual:

The case for decriminalizing the street sale of buprenorphine STAT (Dr. Kevin)

Oxfam: Almost one-third of US workers make less than $15 an hour The Hill

It’s All Oligarchs All the Way Down Counterpunch (resilc)

Antidote du jour. An antidote from long ago by Emma S I somehow missed. Apologies!