Timing a Recession vs. Timing the Stock Market A Wealth of Common Sense

Fundamentally, financial instability arises when the financial and real sectors are out of sync, as exemplified by the financial boom-bust phenomenon. Financial expansions, on the back of aggressive risk-taking, fuel economic activity and overstretch balance sheets. In the process, asset prices and the volume of credit become increasingly disconnected from the capacity of the real economy to generate the corresponding cash flows. Since this disconnect is inherently unsustainable, the process goes into reverse at some point, generally abruptly and violently.

Seen in this light, the risks to financial stability linked to the transition are two-sided. One side is what has attracted attention so far – exposures to overvalued “brown” assets, which should lose their value (become “stranded”) as the transition proceeds. The concern here is that investors either sleepwalk into “brown vortices” or act rashly, generating disorderly “brown runs” (eg Delis et al, 2018). But there is also another side, which has received far less attention and is more similar to the familiar boom-bust pattern. This relates to exposures to either overvalued “green” assets or to assets that purport to be green; a “green bubble”, for short (Carstens, 2021, Aramonte and Zabai, 2021, Cochrane, 2021 and Tett and Mundy, 2022),The first side reflects an underestimation of the scope and speed of the transition; the second an overestimation.

The risk of a green bubble is material.

You have a second body High Country News

Aerosol particle emission increases exponentially above moderate exercise intensity resulting in superemission during maximal exercise PNAS. Descriptive study, n = 8. From the Abtract: “Aerosol particle emission increases moderately up to an exercise intensity of ≈2 W[atts]/kg and exponentially at higher exercise intensities. These data not only explain SARS-CoV-2 transmissions during indoor group exercise but also can be used to design better targeted mitigation measures for physical activity indoors such as physical education in school, dance events during weddings, or high-intensity gym classes such as spinning.”

Shanghai reimposes lockdowns after detecting 11 Covid cases FT. Again, if this is happening in Shenzen (or other of the many ginormous cities in China) it’s not being reported in the West. So what’s special about Shanghai, besides the local administration?

Virus testing the new normal as China sticks to ‘zero-COVID’ AP. The real story here, besides local administration screw-ups and conservative aghastitude, is China’s belief in transmission either by fecal plumes or fomites:

You can’t even go to the toilet in Communist China ‼️

Shanghai local management committee, wants to control everything including going to the toilet. Now the problem is that the elderly don’t know how to sweep the code to use public toilet, neither been taught. pic.twitter.com/ohP5g714aV

China Ties at ‘Lowest Moment’ Since 1972, US Ambassador Says Bloomberg

In the eyes of others, the US is not the benign power it thinks it is Dani Rodrik, South China Morning Post

Health Minister & Hanoi Leader Both Arrested Vietnam Weekly. “Millions of dollars in kickbacks and bribes for a test kit that the WHO never approved for international use.”

‘We won’t roll over and surrender’: Boris Johnson vows not to let rail unions take Britain back to the 1970s with strike set to paralyse the country THREE times this month as he digs in for battle over pay and job security Daily Mail

Russia, Turkey back plan to export grains; Ukraine doubtful AP. Via Tass (paraphrased by AP), Ukrainian Ambassador to Turkey Vasily Bodnar: “Effective security guarantees are required for maritime shipments to resume. These guarantees must be provided through the supply of appropriate weapons to Ukraine to protect its coasts from maritime threats and the involvement of the navies of third countries in protecting the relevant part of the Black Sea.” So, give us more weapons or we don’t sell you grain.

Ukraine forces outgunned up to 40 to one by Russian forces, intelligence report reveals Independent (MA).

Read the full text of chair Bennie Thompson’s remarks in first Jan. 6 hearing CBS. Presumably Thompson’s timeline and Cheney’s timeline are co-ordinated. If so, this is commentary:

Part one: Trump repeatedly and aggressively lied to the public falsely claiming the 2020 election was stolen from him. 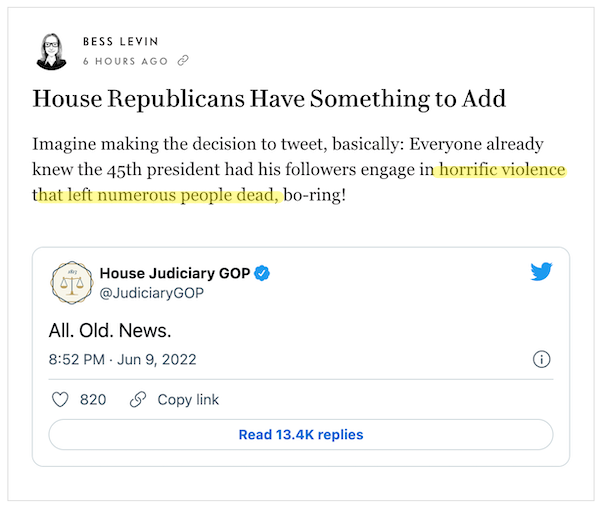 The only death that day on the Capitol grounds was a rioter the cops whacked. The other deaths were, IIRC, from heart attacks, and off the grounds. There were only two (2) indictments for violence during the riot, as AP’s chart in yesterday’s Water Cooler shows.

Why many Republicans believe the Big Lie Politico. Original. Both are interesting and well worth a read.

The Jan. 6 Committee Has Already Blown It David Brooks, NYT. “This is a movement, not a conspiracy. We don’t need a criminal-type investigation looking for planners or masterminds as much as we need historians and scholars and journalists to help us understand why the American Republican Party, like the Polish Law and Justice party, or the Turkish Justice and Development Party, has become a predatory semi-democratic faction.” Makes sense that Brooks would know the right to his right.

Democrats’ Jan. 6 fundraising spree Axios. Ka-ching. Readers, if any of you get a fund-raising email with a clip from the Committee’s “captivating multimedia presentation,” please forward it along to me. Thanks!

People didn’t know they were investing all their money in Terra. When the cryptocurrency collapsed, they lost everything — and say a Y Combinator-backed startup is to blame. Business Insider

The rise of youth cage-fighting Washington Post (Re Silc).

Everyone is sick – illness in 2022 has medieval vibes The Guardian

The Outlaw Nuns Who Traded Their Convent for Cars, Cash and Castles Mel Magazine (Furzy Mouse).

Bloom or bust: what James Joyce can teach us about economics FT

Chief executive Jozsef Varadi said staff should go “the extra mile” when tired so that the airline could avoid cancelling flights.

Pilot unions said flying when fatigued is dangerous and his comments showed a “deficient safety culture”.

But Wizz Air said Mr Varadi was addressing all workers not just pilots.

So that’s alright, then.