Jerri-Lynn here. Some readers might be confused by the apparent contradiction between Sunday’s post announcing my impending retirement and the appearance of my by-line here today. The explanation: I am indeed retiring, but not ’til the end of this week. Before then, I’ll be posting a bit today and more on Thursday, and launching a farewell post as soon as I finish writing it.

Before then, I want to tell readers how much I appreciated the many kind comments they posted in response to Sunday’s announcement. There’s no better feeling a writer can have than to hear from her readers that they were touched by – or learned from her writing. And that’s especially so when the audience is the NC commentariat – the best commentariat.  It’s been such a privilege to write for you.

Thank you so much!

* * *ALL FALKED UP Crime Reads. Columbo, one of the best U.S. tv shows from the ‘70s. That and MASH. And those first years of Saturday Night Live.

All History Is Revisionist History Humanities

Explained: Why The Fight Over DNA Is Central To Biodiversity Conservation India Spend

In Comeback Moment, Up to 150 Fin Whales Spotted Feeding off Antarctica EcoWatch (furzy)

A First Year of Discovery Inference

When Coal First Arrived, Americans Said ‘No Thanks’ Smithsonian Magazine

Floridian attempting to escape sheriff on a John Deere tractor fails to get away, this time Boing Boing re Šilc: “nothing runs like a deere” is false advertising then

Moderna to make two different omicron boosters: one for US, another for UK, EU Ars Technica

Is BA.5 the ‘Reinfection Wave’? The Atlantic (David L)

Lithuanian crowdfunding drive gets Ukraine an armed drone AP . re Šilc: “the wide world of stupidity knows no bounds”

RT’s “Cross Talk” is back on youtube.com Gilbert Doctorow

It appears that Sweden is saying it would be ready to host nuclear weapons on its territory. https://t.co/Wpx0FLo0DG

The life and career of baseball great Babe Ruth Daily News One of the highlights of Grandpa Scofield’s life was to have seen Babe Ruth play. That and being on a ship that sank. And passing through the Panama Canal.

The Uber whistleblower: I’m exposing a system that sold people a lie Guardian

How Elon’s bizarre Twitter takeover saga could have just been a cover for him to sell $8.5 billion in Tesla stock Fortune

The Importance of Competition for the American Economy The White House

EXCLUSIVE: Hunter Biden could face prostitution charges for transporting hookers across state lines and disguising checks to them as payments for ‘medical services.’ First Son spent $30k in five months on ‘the girlfriend experience Daily Mail (BC)

Herschel Walker impresses crowd with incomprehensible word salad about air pollution Boing Boing. re Šilc:  “has to be one of the greatest us senators if elected”

The Supreme Court Has Always Been a Reactionary Body Jacobin

In a historic term, momentum to move the law often came from the five justices to the chief’s right SCOTUS Blog

What will US abortion sanctuary networks look like? Al Jazeera

The people Dems laugh at most are the liberals who think they’re going to “push them left” yet who, at the same time, pledge their unconditional loyalty to vote for Democrats no matter what they do. The pre-MSNBC @Lawrence explained how pathetic this is:pic.twitter.com/mkpL5LIl4Q

9,500 kg and 6.5 metres high: All you need to know about the national emblem atop new Parliament building First Post

World Population Day: India Has a Demographic Dividend To Reap – But Will It? The Wire

The India Fix: How five years of the GST regime has changed Indian politics Scroll

Proposed Megaproject in Great Nicobar Island Could Spell Trouble for Its People, Wildlife The Wire

Piet Mondrian and the six lines that made a masterpiece BBC

From Leonardo to Hepworth: the art of surgery The Spectator

I paid a visit to the local nursery, Roger’s Gardens, earlier this month and of course, even though I was there with a friend who was shopping for plants, I had brought my camera along. While she was busy looking something up on her phone, I had a chance to take a few shots of this strawberry tree. While I was busy framing the colorful fruit, this sweet Orange-crowned warbler popped in to feast on the abundant supply of aphids. 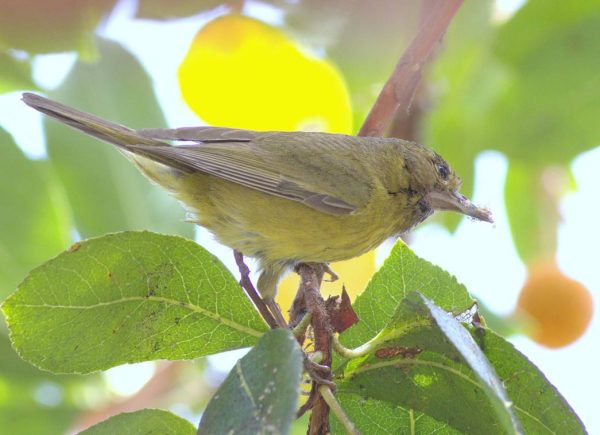