Yves here. In a bit of synchroniticy, at a press conference on Thursday, Trump fielded questions about the shortage of critical medical supplies, with ventilators at the top of the list. Trump blew off the notion that this was his problem. From New York Magazine:

Trump [at the Thursday press conference] argued the pandemic was a completely unforeseeable event. “No one in their wildest dreams thought we’d need tens of thousands of ventilators,” he proclaimed.

Many people thought this. Trump’s own government studied the issue and warned this past fall that it was unprepared for a pandemic. The vulnerabilities cited in the report included an acute shortage of ventilators. In recent weeks, news reports have highlighted the ventilator shortfall in increasingly urgent terms. More than three weeks ago, Health and Human Services secretary Alex Azar testified that hospitals lacked enough ventilators and other equipment to handle the coronavirus.

Hospitals and congressional Democrats have been pleading with Trump to use the Defense Production Act to commandeer industrial resources to crank out more equipment. Asked about this again, Trump shifted the responsibility onto state and local governments:

It is absolutely astonishing that Trump believes state and local governments should have primary responsibility for handling a national pandemic.

There’s quite a lot to write about coronavirus, all of it of the PSA variety. There’s the coming need for hospital beds (“These Places Could Run Out of Hospital Beds as Coronavirus Spreads“), the need for parts for ventilators (“Volunteers 3D-Print Unobtainable $11,000 Valve For $1 To Keep Covid-19 Patients Alive; Original Manufacturer Threatens To Sue“), the need to understand the new working-from-home environment (“Working From Home? Zoom Tells Your Boss If You’re Not Paying Attention“), and so on.

But let’s start with ventilators.

Coronavirus-19 is a respiratory disease, “an infectious disease caused by the virus strain severe acute respiratory syndrome coronavirus 2 (SARS-CoV-2).” It is not the flu. It attacks the lungs, and those whose respiratory or immune systems are weak are particularly vulnerable to severe infections, which often result in death.

Key to keeping the death toll down for those with virulent infections is the availability of mechanical ventilators, machines that help people breathe when their lungs can’t breathe on their own. After recovery from the COVID infection, normal breathing capability is restored and the ventilator is removed. Access to ventilators is critical to saving lives in a crisis like this, more important even than hospital beds, since ventilators can be used almost anywhere — in a triage setting, for example.

Of special importance are portable, low-cost ventilators. (Note the picture at the top, showing a ventilator in a hospital setting — not very portable, not very cheap.)

Fortunately, such a low-cost device exists, or will soon:

We need more ventilators. Here’s what it will take to get them.

As a Stanford postdoc a decade ago, Matt Callaghan created the designs for a streamlined, low-cost ventilator that hospitals could stockpile, to prepare for the possibility of a global pandemic.

But when he went to cofound a company, One Breath, he and colleagues determined the immediate need was producing cheaper ventilators for critical care in the developing world, where chronic respiratory illnesses are among the leading causes of death.

The company raised several million dollars, set up manufacturing in Southeast Asia and finally expected to begin production for its initial markets within the next 12 months.

Here’s what the new ventilator will look like; compare that to the ventilator pictured at the top. 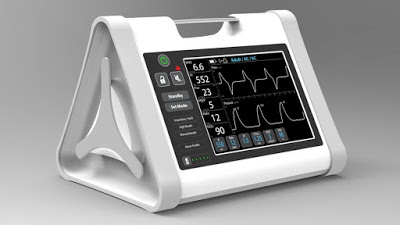 A rendering of One Breath’s ventilator

The obstacles to retooling this device for first-world use are many, as you might imagine. “To begin manufacturing devices suited for an escalating pandemic – which entail different standards, features and batteries – Callaghan says they would need to raise additional funds, lock-in contracts and secure fast-track regulatory approvals, including from the US Food and Drug Administration” — and that just lists a few of the roadblocks.

Chief among them, of course, is money, which brings us to the “free market”:

Adding factory capacity also costs a lot of upfront money, creating real risks for these businesses, since it’s possible hospitals won’t need as many ventilators as the worst-case scenarios suggest.

“Who will pay for all the extra ventilators even if the company can ramp up?” said Kenneth Lutchen, dean of the Boston University’s College of Engineering and a professor of biomedical engineering, who is focused on developing safer mechanical ventilators, in an email. “Presumably at some point this crisis will play itself out and the hospitals will have far more ventilators than they need until the next crises.”

“There needs to be an incentivized business model to hit the go button for ramping up manufacturing and government likely needs to figure out how to successfully engage,” he added.

Who will pay indeed? “An incentivized business model” is one answer. I mean, why would hospitals pay for ventilators they need now, but won’t need later, without being incentivized? It’s only lives after all, and their investors need to eat too.

The other answer is the Sanders solution: It’s an emergency; government steps in and does the job only government can do. Government funds the ventilator company and mandates the ventilators by hospitals be purchased and made available. After all, during World War II the investment community didn’t decide how many jeeps GM would produce — GM was told what to produce and complied.

This is as true today as it was a month ago: There is no neoliberal solution to this problem. Barring a miracle cure, we’ll solve it the Sanders way or we won’t solve it at all.