Calibrating the seriousness of the short-lived occupation of the Capitol by Trump-pumped fanboys is made difficult by the headline elements. A departing President calling for a march on the legislature in a last-ditch effort to stop his electoral loss from being certified. Members of Congress photographed cowering in front of their seats before fleeing to safety. Rioters storming the Capitol, breaking Capitol windows, looting.

What Happened, As Best as We Can Tell Now

The ITV video below gives a good feel for the storming of the building:

Watch @robertmooreitv‘s report from inside the Capitol building as the extraordinary events unfolded in Washington DChttps://t.co/krCQf1uQbx pic.twitter.com/SiWbzF5Nzs

I’m old enough to remember the demonstrations and bombings of the Vietnam War era. Even so, the spectacle of the Capitol occupied and Congressmen in flight is viscerally offensive, like watching someone piss on an altar or tear up a Koran. Even though we often don’t value hard-fought democratic rights like voting as much as we ought to, Americans have been brought up on and have sold abroad a belief in representative government and an independent judiciary. And we have an almost Pavlovian respect, even sometimes awe, for the grandeur of the neoclassical buildings that typically house these institutions.

And yet, and yet….This was no Vietnam-level rioting. This wasn’t even a serious occupation, which one would think was the point, to keep Congress from executing the final ratification of the Biden win. Could you image the spectacle of democracy chastened if the Trump mob had held the Capitol and forced Congress to scramble find a hotel ballroom in which to finish their official business?

Nope, Congress was back in business by 8:00 PM, roughly seven hours after the barbarians stormed the walls, albeit with pretty much everyone badly rattled and some Trump supporters rapidly backpedaling from their former positions.

Despite the gravity of the event, if you look not very hard at what happened, both sides in their different ways were shambolic. Even though the mainstream press has been talking up the prospect of a Trump coup even before his electoral loss, this insurrection was impulsive. Trump gave an hour-long speech where he repeatedly exhorted the crowd to march to the Capitol and “stop the steal”. As ugly and embarrassing as the Capitol seizure was, it did not begin to rise to the level of a coup (read the Wikipedia bio of Sukarno or the review of this book focused on the coup that removed him from office and see the contrast). There wasn’t a serious or even half-hearted effort to seize critical infrastructure, control communication (no classic suspension of news broadcasts or launch of insurrectionist pronouncements), terrorize the population through executions or other shows of force, or purges of opposed faction members. The reporting is still spotty, but it appears only the RNC, and not the DNC, was on the receiving end of a pipe bomb.

It was known well in advance that the Trump fans were rallying on January 6 to protest the election. It was known well in advance that Trump likes inflammatory talk. I have yet to see anyone provide an estimate of the crowd that came to the Capitol, but I’d guesstimate 5,000 maximum, probably much lower given that the invaders weren’t cheek by jowl after they got into the Capitol. Have a look at this video clip, which is the best I’ve seen in terms of giving a sense of the size of the mob:

Next. Watch this video. Presumably minutes earlier of a different angle and section of Capitol. It presents a much more frightening understanding of what they were dealing with. pic.twitter.com/p1UOnmMQEy

Now before you say, “No wonder the cops were overwhelmed,” go have a look at other shots of the Capitol. Pretty much any other shots. It sits on a steep hill, with some large intermediate terraces on the way up to the entry. This is an exceptionally easy building to defend. Think water cannons deployed from above on the protestors.

And its not as if the protestors were hardbodied skinheads carrying bludgeons and sporting brass knuckles: 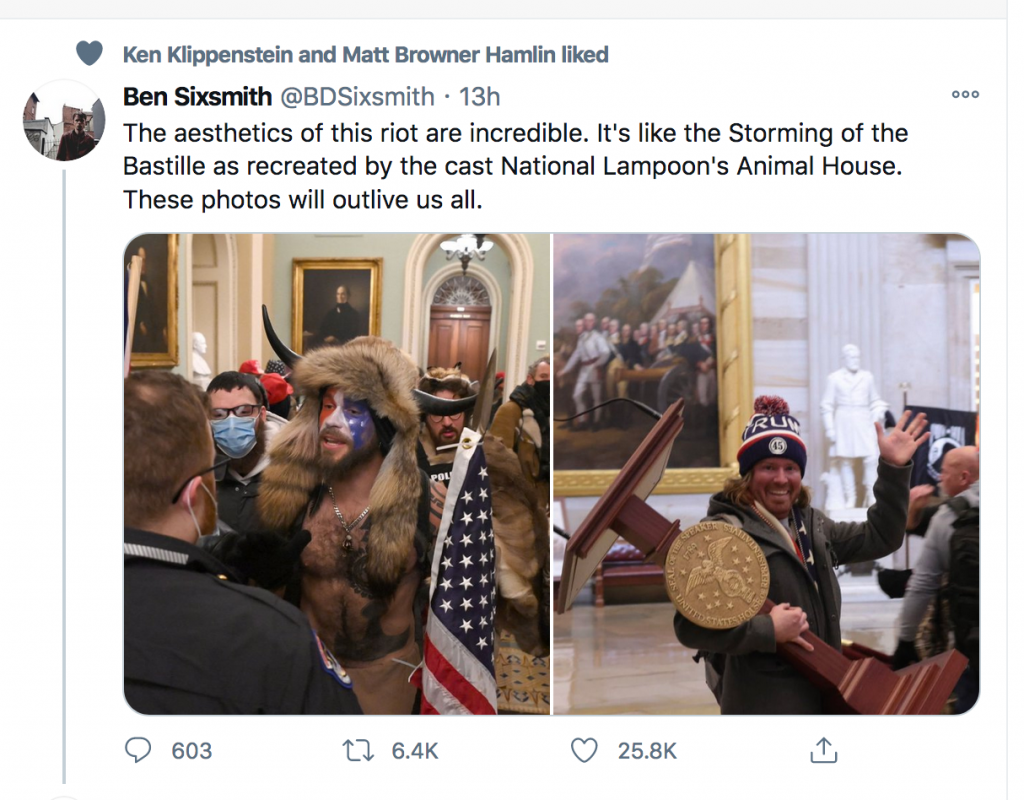 Not a good look that that tweet has since been removed:

But it shouldn’t even have gotten to that. As a London Met officer put it (vouched for by APHClarkson):

First sign of lawbreaking then “kettle” contain and detain. Then reinforce.

Wear the protestors down. Build in your own resilience. You can take it longer than they can give it

Protestors should never have been within 500 metres of the venue.

There’s more to the tweetstorm but you get the idea. By contrast, literally no one even heard about how the New York City cops frustrated the anti-Iraq war protestors in 2002. I’m told nearly 100,000 showed up despite it being a desperately cold day. All access to the planned protest site, UN Plaza, was cut off. Barricades at Second Avenue, defended in the blocks closest to the UN by mounted police, by cops in cars and on foot further north. The protestors were shunted north to Harlem. They gave up when they realized they would not be able to assemble.

And it’s not as if these protestors were all that scary save for the fact that the police were terribly outmanned. No evidence of gun carrying, certainly no photos of any brandished or shots from them. The only reports Lambert and I have seen of gunfire (aside from the protestor who was shot and died) is from this Bloomberg account, towards the very end, and it attributes semi-automatic fire to the police.

As Lambert put it, “Seems like, as it were, an opportunistic infection that struck an entity with a compromised immune system.”

So why were the police so utterly unprepared? Several theories are plausible, and they are not mutually exclusive.

The Capitol Police are mere show ponies. Police contacts speculate that the Capitol Police, despite their big budget and manpower, are very much like state capitol police. The worst situations they have to deal with are someone in the gallery throwing paint or worse at the solons, or a few people waving banners and yelling, or at the very extreme, someone trying to set themselves on fire. In other words, nearly always small numbers at most of disruptive as opposed to truly violent people.

Unlike with the Black Lives Matter protests, which in DC had a very impressive show of National Guard support, the Guard weren’t called in until after the Capitol had been breached, and even then not quite immediately. Why? The National Guard would report to Trump! There was an effort to have the Defense Department summon them, and finally Pence made the request.

But per below, that does not seem adequate as an explanation:

I’ve protested in DC numerous times. I’ve been a police liasion for non-violent direct actions. Im telling you — if we had done anything CLOSE to what is happening right now — we would have either been shot or the national guard sicced on us immediately.

At least some of the Capitol Police were awfully cooperative:

I’ve protested in DC numerous times. I’ve been a police liasion for non-violent direct actions. Im telling you — if we had done anything CLOSE to what is happening right now — we would have either been shot or the national guard sicced on us immediately.

This, erm, acquiescence is consistent with the curiously low number of arrests so far, 13 versus 11 at a single BLM protest in DC in July….oh with all the 11 shortly released with all charges dropped.