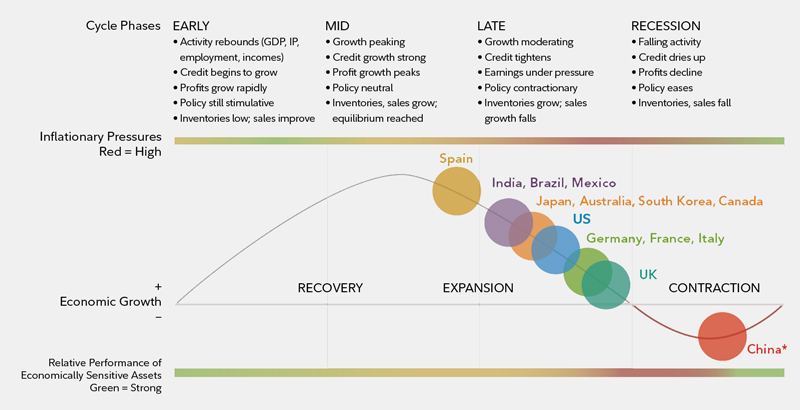 How to Manage Your Investments Late in a Cycle
Nobody knows for sure whether equities will keep rising or for how long, but knowing a little market history can help ease the anxiety.
Bloomberg, January 28, 2021

Live long enough to see several complete market cycles, and patterns emerge. Denial and disbelief turn into reluctance and acceptance as stocks go from being far too cheap to far beyond fair value. Those who lashed themselves to the mast to avoid the siren call of the bulls miss a money-making opportunity as a speculative frenzy intensifies. When the crash belatedly arrives and blood flows in the streets, most are too terrified to buy. Instead, they double down on their bearish bets, missing a generational buying opportunity.

This rinse, lather, repeat cycle of market history is filled with epic stock narratives. A couple of the more recognizable ones in recent history include the dot-com boom of the late 1990s, real estate in the 2000s and the blockchain frenzy of 2010s. But what really makes them so fascinating is the underlying human psychology.

I am on record as being constructive on markets at the moment, due to historically low interest rates, big fiscal stimulus, the 30% market reset early last year 1 and the distribution of vaccines to combat the Covid-19 pandemic. But I also recognize that there are more than a few signs that this market is – choose your favorite cliché – either long in the tooth, late in the game, getting toppy or full-blown “bubblicious.”

For those of you who may be worried about the goings on in markets, the following observations might be useful – assuming the very smart people who say a crash is nigh are correct. My favorite sort of advice is the kind that is useful regardless of whether the bulls or bears are right.

Start with rotation. No, not the obvious rotation going on currently from large market capitalization growth companies into small cap value, or from U.S. equities into developed markets outside the U.S. and emerging markets. Rather, it’s about simply taking some chips off the table to be redeployed elsewhere.

I saw this rotation as a young market stud in the 1990s, which was as a not bad trader and a budding strategist. My vivid recollections of that time 20-something years ago was being directed by clients to roll out of some of their high-flyers – names like EMC, Dell, Cisco, Qualcomm and Yahoo, and send them the cash. 2 These investors then redeployed those winnings to other assets, the most memorable being real estate.

Mortgage rates in the 1990s were low compared with the 1970s, but nothing like what’s available today. These were not people taking out 2000s era home equity lines of credit or doing a cash-out mortgage refinancing to pay for a vacation or a flat screen TV. Rather, these were investors who simply sold some enormously appreciated stock to “ring the register,” locking in a percentage of gains.

Curiosity led me to always ask, “Hey, what are your plans for the cash?” More often than not, they were happy to discuss. I was told in great detail about proceeds buying a beach house or vacation property or a larger property in a nicer neighborhood. Some were all cash, other deals were financed with a large down payment and a manageable mortgage.

Some of you might be seeking out S&P/Case-Shiller housing indexes to see how well that trade did versus the S&P 500 or Nasdaq 100 indexes. I direct you to William Bruce Cameron’s observation that “Not everything that counts can be counted, and not everything that can be counted counts.” You can’t measure the non-monetary benefits of certain assets. Those real estate purchases improved peoples’ life satisfaction. If you are sitting on huge gains, consider what something similar might mean for you.

Investing for the Next Cycle: Can you imagine the fortitude required to make equity purchases in the 1970s? Stocks not only went nowhere when measured from the start of the decade to the end, but actively lost “real” value due to inflation. Once the 1980s bull market came along, these holdings took off and more than recovered. Those who made terribly-timed buys in the 1970s turned out to be look rather brilliant 20 years later.

Anybody who bought securities tied to broad indexes or mutual funds in 1998, 1999 and 2000 didn’t break even for more than a decade. And then suddenly, in the 2010s, when the next bull cycle began, those holdings exploded higher.

Assuming you are more than 10 years away from retirement, how do you feel knowing some of your purchases might be underwater for the next five to 15 years? If you’re comfortable with a long holding period of flat to negative returns, then back up the proverbial truck. That’s especially true if you are continuing to work while dollar cost averaging purchases into whatever downturn the market may encounter.

Again, I am constructive on equities at the moment, but a correction of some depth in 2021 should not come as a surprise. I’ve been in this long enough to know that many people don’t realize that “long-term” actually means “multiple market cycles.”

Don’t Fear Capital Gains Taxes: Finally, this reminder: the only surefire way to never pay capital gains taxes is to make sure you never have capital gains.

Consider Qualcomm: The stock had spent most of the 1990s meandering nowhere, only to explode 30-fold higher in 1999. I recall conversations with investors that had large holdings of the company’s shares who did not want to pay giant tax on the massive appreciation they enjoyed that year. Those who missed that top waited 21 years to regain it after the shares subsequently collapsed.

When is it ever a good time to pay capital gains taxes? 3 Beyond sudden windfalls, consider: 1) Any time you can match the gains with losses: you’re taxed on net gains, and losses carry forward. 2) If you’re planning on moving to a high tax state. New York has a high 8.82% marginal rate, so it makes sense to sell appreciated stock prior to moving to the statte. Conversely, it pays to defer those sales if your move is to a low or no state-income tax state such as Florida or Texas until you complete the relocation.

Maybe the market tops out here, or perhaps it runs another three to seven years. Nobody knows. Regardless, this advice is worth considering no matter what the future brings.

Five Drivers of Markets in a Biden Administration (January 20, 2021)

2. Unless you lived through the period, its easy to forget how crazed the 1990s became. As the Los Angeles Times noted in 1999, a $5,000 investment in the personal computer maker DELL at the start of the 1990s would be worth more than $4.5 million. The same $5,000 in EMC became to be worth $3.5 million. About 10 weeks later, both stocks would join the market crash and lose nearly 90% of their value.

3. As I discussed in a December column, the other option is to donate appreciated stock to a charity.

I originally published this at Bloomberg, January 28, 2021. All of my Bloomberg columns can be found here and here.