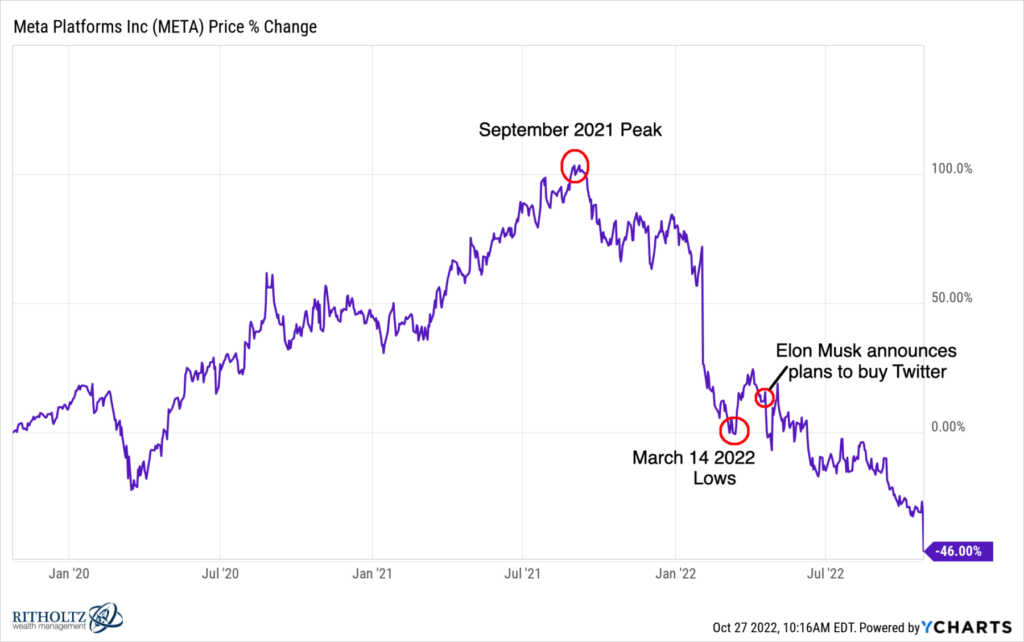 We discussed how ephemeral and short-lived great success can be yesterday in Can Anyone Catch Nokia?.

As I was writing it, I had no idea it was a metaphor for what would happen a few hours later, a coincidental preface to a discussion about another mega-cap tech — META, aka Facebook.

I asked Scott Galloway about which of the Four firms was most likely to falter, we (more or less) agreed that it was Facebook. Unlike Microsoft, Amazon, Apple, or Google, FB does not have all that durable of a grip on its user base; this puts its advertising revenue base at risk. META’s moat is far shallower and narrower than that of other FAANGM firms.

Consider the chart above: The peak in META’s stock was Sept 21, 2021 — a few months before the market itself topped. It had already fallen 50% from that peak to new lows in mid-March — a full month ahead of Elon Musk’s proposed takeover. My colleague Ben Carlson points out that “Facebook’s market cap has declined by ~$800 billion since then, a loss of value is greater than the current market cap of every company in the S&P 500 save for Apple, Microsoft, Google & Amazon. The stock is now underperforming the S&P 500 since it went public in 2012.”

Regardless of what you think of Musk, he is not someone you want to be competing with if you can avoid it. He has proven himself to be disruptive, innovative, and capable of thinking way, way outside the box. And while Tesla shareholders are concerned with yet another shiny object distracting Elon, perhaps Facebook shareholders are now realizing that in addition to TikTok, as of tomorrow, they have another social media competitor fighting them for ad dollars.

But it was Zuck’s sketchy respect for its user data or privacy that was once the firm’s greatest source of profits — until Apple decided to step in on behalf of its users. Facebook’s business model was t-boned by Apple’s action. It wasn’t a fatal blow, but nobody walks away unscathed when a vehicle that large plows into you.

TikTok stealing users, Apple breaking their magic data source for advertisers, and now this: An unpredictable but brilliant competitor in the very same social media space. How much of this is already reflected in the stock price is unknown. But I suspect we will be finding out over the next few quarters…

Previously:
Less than meets the eye at Facebook (February 18, 2012)