Yves wrote yesterday about what the Russian response might be to the Nord Stream attacks. I wanted to touch on a few other potential consequences I’ve come across, and as there are no doubt more, hope to see them in comments.

There were questions in Washington as to whether European resolve would hold up through the winter, as well as unconfirmed reports that Berlin and Moscow were even holding secret talks to reopen Nord Stream 1 and begin the transfer of gas through Nord Stream 2.

Now Germany’s fate is sealed – as is most of the continent’s. There is no longer an off ramp, and Europeans are now prisoners of NATO committed to their own self-destruction.

Slovakia is already requesting billions of euros in support. How long until every other member of the block is asking for the same?

Prior to the Nord Stream attacks, there was at least a faint possibility that sanity would prevail and Russian energy imports could resume. Now the extent of the damage means they are unlikely to carry any gas to Europe this winter even if there was political will to bring them online.

Just to recap a little of what that is likely to mean:

And yet Europe continues to double down, proposing a new round of Russian sanctions on Wednesday. They include tighter trade restrictions, more individual blacklistings, and an oil price cap for third countries. Hungary, though, says it won’t go along with any energy sanctions, and the EU needs unanimity to impose sanctions.

Speaking of Poland, it’s coming up in the world. The Baltic Pipeline that opened Tuesday will bring gas from Norway to Poland via Denmark, but has a capacity of only 10 billion cubic meters per year. The Nord Stream systems could carry up to 110 cubic meter per year.

The US Department of State yesterday announced $288.6 million in military aid for Poland, making it “one of the largest recipients of foreign military assistance outside of Ukraine.” If John Helmer is right about Polish Navy and special forces being behind the pipeline attacks (with support from the US), maybe it’s a reward for a job well done.

If the 2008 financial crisis was the beginning of the end of the era of European social democracy, what’s going to happen now with Great Depression conditions and people freezing to death?

Center-right parties are already being shown the exit, and far-right nationalists are ascending.

Both the Sweden Democrats and the Brothers of Italy were victorious this month. While they both remain anti-immigrant and as nationalist as one can be within the confines of the EU, they also both renounced their former NATO-skeptic positions in the run up to elections. Brussels would be lucky if that’s the extent of the backlash to its Russia policy.

It’s hard to believe that’ll be the case. If voting is still the preferred method to select leaders once this crisis picks up steam, what happens if anti-EU parties come to power across the bloc and in power centers like Berlin?

Protests were already erupting in Germany and elsewhere against the closure of the pipelines before they were attacked. Germany is rushing out a 200 billion euro package to help protect businesses and households, but it’s unlikely to anything more than ease the pain.

The anti-EU party Alternative for Germany (AfD) is already rising in the polls as it attacks the sanctions policy against Russia.

“They are saying that corrupt lawmakers are ignoring the needs of the people,” Wolfgang Schroeder, a political science professor at the University of Kassel, told DW. “They’re arguing that elites in Moscow aren’t the victims of these sanctions policies, but the German people are.”

According to DW,  that message is resonating:

According to figures published by research firm INSA, national support for Scholz’s party has fallen from 25.7% in last year’s federal election to 18% on Monday, the FDP has been reduced by half to 7% and even the Green Party is now experiencing a backlash against their plans to mitigate the gas shortage. The AfD, in the same time frame, has risen in the national polls from 10% to 15%, one of its highest levels ever.

In France, while President Emmanuel Macron managed to win re-election earlier this year, the major takeaway from the contest was the rise of the anti-EU right, which is now the second largest party in Parliament. Macron is already facing a 60 percent disapproval rating.

During challenges to the EU (e.g., the 2014-16 migrant crisis, COVID response), it becomes every country for themselves. What’s going to happen during what’s likely to be the biggest crisis the bloc has ever faced? Reuters:

EU laws oblige member states to send gas to a neighbouring state whose households or essential services like hospitals face a severe shortage. To make that happen, governments arrange bilateral deals. However, just eight countries are covered by the six agreements so far.

The US Takes a Victory Lap

Energy companies and traders are making a killing on exporting LNG to Europe with some recording record profits, but the US is now dealing with much higher prices itself. Irina Slav writes at Oilprice.com:

Meanwhile, however, LNG prices have soared like an eagle, China is re-selling Russian LNG to Europe, and gas prices in the U.S. are three times higher now than they were a decade ago and up 95 percent on the futures market for November 2022 to March 2023.

Backlash against the LNG exports to Europe have already begun in the US with a group of New England states requesting that Washington help their states rather than Europe.

Due to Germany’s demise, the US would seem to salvage some sort of victory from the pipeline attacks even if Russia wins on the battlefield in Ukraine but are still hoping to turn it into a multi-year conflict.

“I want to be very clear about this, [the] United States will never, never, never recognize Russia’s claims on Ukraine sovereign territory,” Biden said on Thursday referring to the four regions of Ukraine that just voted to join the Russian Federation.

Washington announced yesterday it’s sending another $12 billion to Kiev and setting up a new single command center in Germany to coordinate training and assistance to Ukraine – a sign they “expect the threat from Russia to Ukraine and its neighbors to persist for many years.”

As there’s no more off-ramp incentive for Europe, there’s now no reason for Brussels not to “fight to the last Ukrainian.” Hawks in Washington are rejoicing:

But Ian Bremmer has accurately been described as “the man with his finger just off the pulse,”  so while the US will benefit in some ways now, the long term might not be so great.

Irish economist Philip Pinkington compares what’s about to happen to Europe to the Great Depression and says that even if some European industry moves to the US, it will be a short-term victory. He predicts the following:

Some might assume that this might provide an opportunity for other Western countries. Many think that, for example, America might be able to “reshore” European manufacturing. This is unlikely to be the case. If European industry crumbles, Europe once again becomes an economic black hole — as it did in the 1930s. Trade will dry up and its key trade partners will feel the burn. In short, if America tries to ship European manufacturing to its shores, it will soon find that there is no one to buy the products.

Yet there is one key difference between the world of the 1920s and 1930s and today. Back in the interwar period, there was no real rival economic bloc to the West. Russia was a small player, China was an agricultural economy, and what we now call the “developing economies” (Brazil, India, South Africa etc.) were anything but developing. That is no longer the case.

His analysis does assume that the “Empire of Chaos” doesn’t have more tricks up its sleeve, however. Countries and regions that appear stable now might not be that way in the not-too-distant future. Let’s not forget that at the beginning of this year Germany was a safe and prosperous economic powerhouse.

Putin acknowledged yesterday how Western forces are attempting to stir up trouble all around Russia in former Soviet states:

Pursuing their goals, our geopolitical adversaries, our opponents, as we said recently, are ready to expose anyone, everyone, any country to a blow, turning it into a ground zero of a crisis, instigating “colour revolutions” and unleashing bloody massacres. We have seen this many times before. We also know that the West is devising scenarios for inciting new conflicts in the [Commonwealth of Independent States].

If it wasn’t abundantly clear already, the pipeline destruction in the Baltic Sea makes it clear the battlefield is no longer confined to Ukraine. Moscow said it recently foiled an attack on one of its pipelines to Turkey, claiming:

That would mean it’s the Turkstream pipeline, which carries gas from Russia to Turkey and then onto Bosnia, Bulgaria, Greece, Hungary, North Macedonia, Romania, and Serbia. Turkey, Bulgaria, Hungary, and Serbia are all countries who have not swallowed the NATO line on Russia hook, line, and sinker.

Would the US/NATO/Ukraine go after other pipelines like Turkstream if Turkey, Hungary, and Serbia continue to play nice with Russia?

And if the Nord Stream attacks mean pipelines are now fair game, well, things could get very interesting. 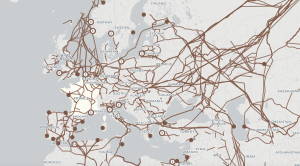 Anders Puck Nielsen, a researcher with the Center for Maritime Operations at the Royal Danish Defence College, told the Associated Press:

We have pipelines, we have communication cables like the internet. We have just power lines running on the seabed. All of this is vulnerable and our societies are very dependent on it. And it’s very, very difficult to monitor what’s going on and to prevent a case of sabotage.

As Yves pointed out yesterday, China’s official English-language organ, gently pointed the finger at the US for the pipeline attacks. Yesterday China’s military brass announced increased cooperation with Russia. From TASS:

China intends to press ahead in advancing its military cooperation with Russia and replenishing it with new strategic content, Chinese Defense Ministry Spokesman, Senior Colonel Tan Kefei, said on Thursday.

Beijing is proceeding cautiously, but is increasingly moving off the sidelines. If the US wnts to turn the whole world into a battlefield, what other choice do they have?

Diana Johnstone sums it up nicely at Consortium News:

Gangster wars are waged to remove competitors. In gangster wars you issue an obscure warning, then you smash the windows or burn the place down.

Gangster war is what you wage when you already are the boss and won’t let any outsider muscle in on your territory. For the dons in Washington, the territory can be just about everywhere.