Yves here. While the press was fixating on Ukraine, an important IPCC report has been almost entirely ignored.

By Dana Nuccitelli, research coordinator for the nonprofit Citizens’ Climate Lobby, is an environmental scientist, writer, and author of ‘Climatology versus Pseudoscience,’ published in 2015. He has published 10 peer-reviewed studies related to climate change and has been writing about the subject since 2010 for outlets including Skeptical Science and The Guardian. Originally published at Yale Climate Connections

The new IPCC Working Group II report paints an alarming picture of rapidly growing risks currently being felt around the world, including widespread damages to human and ecological health. It finds nearly half the world population living “in contexts that are highly vulnerable to climate change.”

For example, the IPCC says in its report that climate change has exacerbated food and water insecurity, extreme weather disasters, declines in people’s physical and mental health, premature deaths, species loss and extinctions, and vector-borne diseases in regions around the world. Citing the Paris Climate Agreement ambitious target of limiting global warming to 1.5 degrees Celsius (2.7 degrees Fahrenheit) above pre-industrial temperatures, the authors warn that each additional increment of global warming above that threshold will bring increased risks of new and worsened climate damages.

Adaptation measures – which the report finds woefully underfunded – can reduce risks from climate impacts, but those efforts will be overwhelmed by increasingly extreme weather events unless combined with aggressive efforts to curb global warming. The IPCC report cautions that:

The cumulative scientific evidence is unequivocal: Climate change is a threat to human well-being and planetary health. Any further delay in concerted anticipatory global action on adaptation and mitigation will miss a brief and rapidly closing window of opportunity to secure a liveable and sustainable future for all.

Those concerns are reported as especially problematic in sub-Saharan Africa and Central and South America, which along with portions of Asia are the most vulnerable regions to climate change impacts. These equatorial countries also lack the resources to deploy climate adaptation measures. Climate-worsened droughts and floods in recent years have increased acute food insecurity and malnutrition in these regions.

Over the past 50 years, technological advances have increased global food productivity, but climate change has slowed that growth. The IPCC projects that rising temperatures will decrease agricultural productivity in many regions, including much of North America. As IPCC report coordinating lead author Rachel Bezner Kerr said in a press briefing, “Climate change is projected to reduce overall yields of important North American crops such as wheat, maize, and soybeans” and also have adverse impacts on livestock and fisheries. “The picture is stark for food systems,” she added. “No one is left unaffected by climate change.”

Worsening droughts and shrinking glaciers and snowpacks have also contributed to water insecurity in many regions. The IPCC concludes that roughly half of the world’s population currently experiences severe water scarcity for at least some part of the year.

The IPCC also reports that climate change has adversely affected both the physical and the mental health of people around the world. Mental health is stressed by the trauma caused by extreme weather events and the associated loss of livelihoods and culture, and by concerns about the future stability of human society in a hotter world.

People’s physical health is particularly threatened by worsening extreme heat waves and resulting heat stress, which have increased the number of premature deaths in all regions of the world. Vector-borne diseases like West Nile virus, Lyme disease, malaria, and dengue fever are also on the rise in many countries. Warmer temperatures allow disease-bearing insects like mosquitoes and ticks to thrive and expand into regions previously too cool to provide suitable habitat. 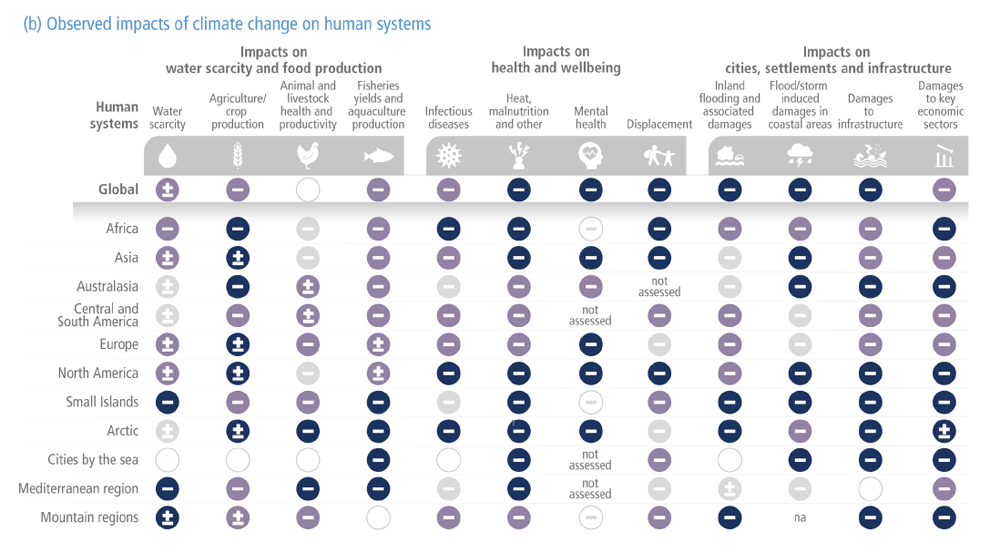 A number of climate researchers have cautioned that effectively addressing climate change risks comes down to a combination of three choices: “mitigation, adaptation, and suffering.”

So far, mitigation and adaptation efforts are falling well short of international targets. IPCC report coordinating lead author Edwin Castellanos estimated that developing countries will need around $127 billion per year for climate adaptation efforts, and much more in developed countries. For comparison, “In 2009, developed countries committed to mobilizing $100 billion per year by 2020 to address the climate change needs of developing countries,” Castellanos said. That figure includes both climate mitigation and adaptation costs, and wealthy countries have failed to even raise the promised amount. The “adaptation gap,” as the report puts it, is growing and is largest among lower-income population groups.

The report notes that many adaptation measures can yield additional benefits by also protecting ecosystems or curbing greenhouse gas emissions. For example,

Energy generation diversification, including with renewable energy resources and generation that can be decentralized depending on context (e.g., wind, solar, small scale hydroelectric) and demand side management (e.g., storage, and energy efficiency improvements) can reduce vulnerabilities to climate change, especially in rural populations.

But the IPCC also warns against “maladaptation,” actions that inadvertently increase risks of adverse climate outcomes. For example, excessive fire suppression in naturally fire-adapted ecosystems in the western U.S. has led to overly dense forests that, combined with climate-worsened hotter and drier weather, now burn in more uncontrollable wildfires.

Some species and ecosystems have struggled to adapt quickly enough to keep up with the pace of human-caused climate change. The IPCC reports:

Approximately half of the species assessed globally have shifted polewards or, on land, also to higher elevations. Hundreds of local losses of species have been driven by increases in the magnitude of heat extremes, as well as mass mortality events on land and in the ocean and loss of kelp forests. Some losses are already irreversible, such as the first species extinctions driven by climate change.

As a result, the IPCC estimates that risks of near-term biodiversity loss in a variety of ecosystems are moderate to very high, including in forests and other terrestrial ecosystems, coral reefs and other marine ecosystems, and those dependent on Arctic sea ice, now rapidly shrinking.

The report suggests that conserving approximately 30% to 50% of Earth’s land, freshwater, and ocean areas could help preserve the resilience of biodiversity and ecosystem services. But so far, less than 15% of global land, 21% of freshwater, and 8% of ocean are protected areas.

The Importance of the 1.5°C Paris Target

The IPCC report frequently references the risks of surpassing the 1.5°C Paris target, including in terms of declining biodiversity. For example, more ocean and coastal ecosystems face high to very high risk of biodiversity loss in a 2°C (3.6°F) world than at 1.5°C, and most marine ecosystems face high to very high biodiversity loss risks at 3°C (5.4°F). In terrestrial ecosystems, up to 14% of the species assessed in the IPCC report will likely face very high risk of extinction at 1.5°C; that number rises to 18% at 2°C; 29% at 3°C; 39% at 4°C; and up to 48% of species extinctions at 5°C.

“Near-term actions that limit global warming to close to 1.5°C would substantially reduce projected losses and damages related to climate change in human systems and ecosystems, compared to higher warming levels, but cannot eliminate them all,” the IPCC report authors conclude. Projected flood damages in a 2°C warmer world are nearly double those in a 1.5°C warmer world, and about three times worse if global warming reaches 3°C, barring substantial adaptation efforts. Food insecurity risks in vulnerable regions rise from moderate to high levels between 1.5°C and 2°C, as worsening heat and drought extremes would combine to pose a threat to corn crops in major food-producing regions.  As IPCC report lead author Adelle Thomas put it:

For both losses and damages and limits to adaptation, we find that 1.5°C is a critical level of warming. Exceeding 1.5°C means that we will experience greater levels of losses and damages, with some of them being irreversible. It also means that there will be additional people and ecosystems that will reach the limits of adaptation.

But few countries, including the U.S., are on track to meet their Paris targets. The U.S., pledged to cut its greenhouse gas emissions 50% below 2005 levels by 2030 on a path to net zero emissions by 2050, but currently lacks the federal policy to achieve those goals.

The IPCC Working Group II report concludes that time is short for securing a livable and sustainable future by transitioning away from fossil fuels.