Petrol price Reduce by 12 paisa per liter, diesel by 14 paisa

Petrol price Reduce by 12 paisa per liter, diesel by 14 paisa 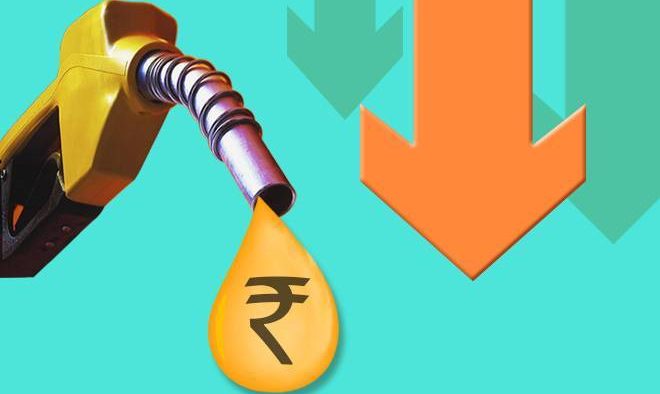 Petrol price was on Sunday cut by 12 paise a litre and diesel rates by 14 paise as oil companies moderated rate reduction amid the fall in global prices to absorb the hike in excise duty on fuel by the government.

Petrol in Delhi now costs Rs 69.75 per litre, while diesel is priced at Rs 62.44, according to a price notification of state-owned oil firms.

Delhi has the lowest fuel prices among metros because of lower state taxes.

Industry sources said the reduction in rates would have been higher but for the Rs 3 per litre increase in excise duty effected on Saturday.

Oil companies, they said, had been moderating reduction warranted in retail prices in anticipation of an excise duty hike.

The gains they thus accumulated were adjusted against the price hike that would have been necessary because of the increase in excise duty. Some moderation in passing on the decline in international prices in the near future to domestic consumers will continue till all of the excise duty impact is recovered, the sources added.

The government had on Saturday hiked excise duty on petrol and diesel by a steep Rs 3 per litre each to garner about Rs 39,000 crore additional revenue as it repeated its 2014-15 act of not passing on gains arising from the slump in international oil prices.

According to a notification issued by the Central Board of Indirect Taxes & Customs, special excise duty on petrol was hiked by Rs 2 to Rs 8 per litre and to Rs 4 a litre from Rs 2 in case of diesel.

Additionally, road cess was raised by Re 1 per litre each on petrol and diesel to Rs 10.

With this, the total incidence of excise duty on petrol has risen to Rs 22.98 per litre and that on diesel to Rs 18.83.

The government had between November 2014 and January 2016 raised excise duty on petrol and diesel on nine occasions to take away gains arising from plummeting global oil prices.