It’s really easy to be overly contrary, but it’s quite remarkable again and again to see the press, presumably reflecting what their political and military sources in the West are telling them, that Russia has a lousy no good military…that is nevertheless beating what Scott Ritter repeatedly depicted as a military trained to NATO standards and interchangeable with other NATO units.

We’ll use as a case study an article in yesterday’s Wall Street Journal, The 19th-Century Technology Driving Russia’s Latest Gains in Ukraine: Railroads. Even the photo at the top is unwittingly at odds with the message: 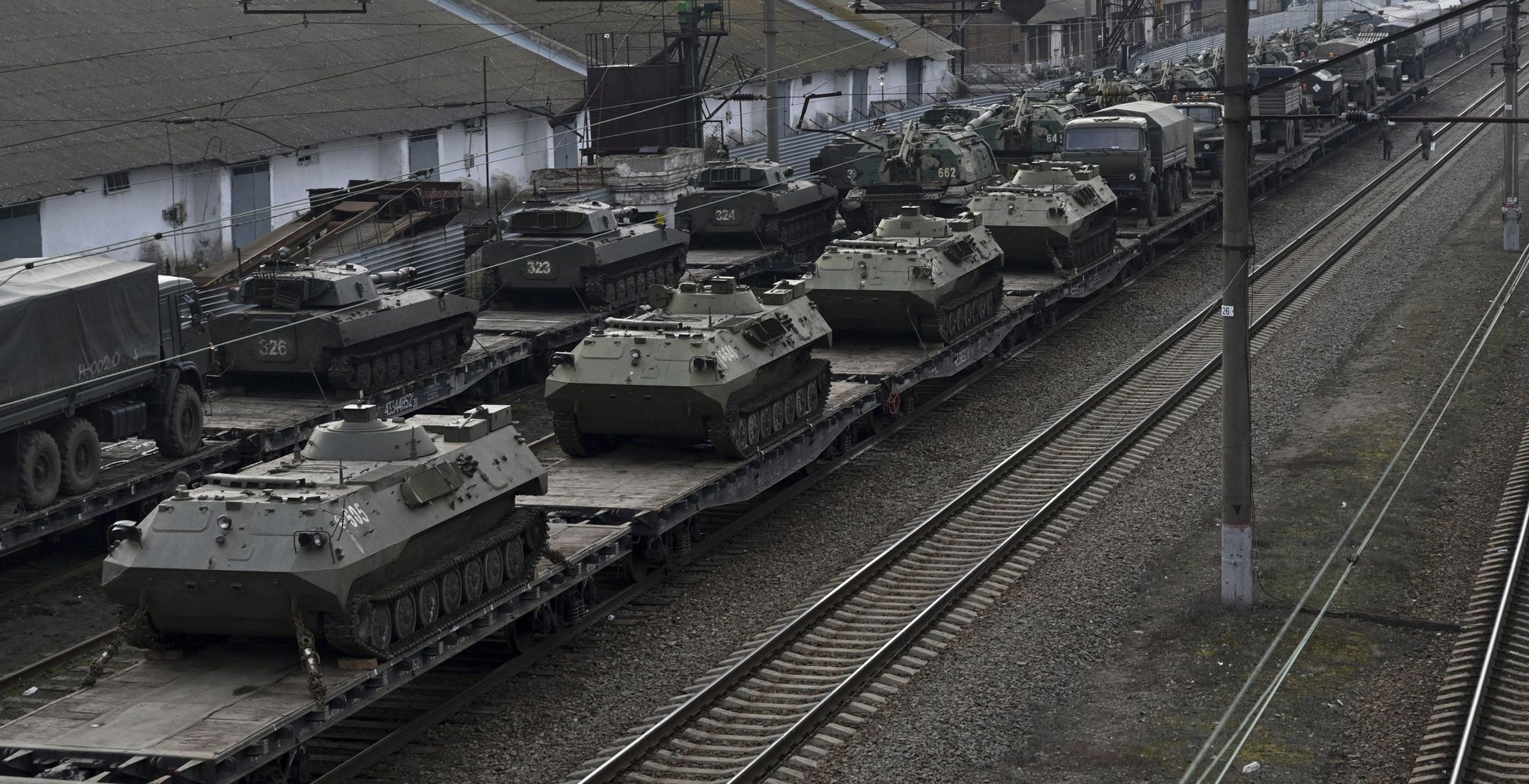 Have a good look at the tracks. Maybe only a railroad maven like Lambert would see it, but those are beautiful, and most assuredly 21st century standard tracks.

Before we get to the particular questions about this article, let’s remember why this sort of thing matters. We are already suffering the cost of badly misjudging who would suffer more from the sanctions imposed on Russia, as shown by the Fed raising interest rates in a destructive effort to kill an inflation that isn’t the result of too much demand but supply shocks. We’ve similarly warned it’s reckless for the US and NATO to persist in underestimating Russia, and It’s going to unduly prolong the war, assure that there will be no negotiated outcome (not that any was all that likely given our “not agreement-capable” status) and produce an orgy of military spending in a misguided effort to contain Russia when we’re backfiring at that at almost every turn.

Larry C. Johnson explained the why the US considerably over-estimates its capabilities:

I want to focus on one of the key themes in Andrei Martyanov’s essential book, Losing Military Supremacy–the weapon systems the United States is spending money to develop and deploy are obscenely expensive and completely vulnerable to Russia’s weapons created to defeat the American threat. Let me explain it this way. The United States has created the most expensive racing car in the world but the race it will run is over an off-road course littered with rocks, deep ruts and sandy mountains. In short, the vehicle will breakdown and not complete the race.

Here is Andrei’s summation of the problem:

Manipulation and PR are no substitute for actual victory which is defined universally as achieving the political objectives of the war, or in Clausewitz’s one liner—the ability to compel the enemy to do our will. The United States military’s balance sheet on that is simply not impressive, despite a mammoth military budget, immensely expensive weapons and a massive, well-oiled PR machine. All this is the result of the US military-industrial complex long ago becoming a jobs program for retired Pentagon generals and an embodiment of the neoconservative “view” on war—a view developed by people, most of whom never served a single day in uniform and do not possess even basic fundamental knowledge of the physical principles on which modern weapons operate and how technological dimensions reflect upon tactical, operational and strategic aspects of war (they are all tightly interconnected and do not exist separately). But talking up or blowing out of proportion, or grossly exaggerating US military capabilities does not require a serious academic and experiential foundation—today it is enough to have that desire and a good command of the English language to do so.

The focus in that must-read Johnson article was on weapons systems, but the collective West has taken to denigrating Russia’s capabilities because their military doctrine is different than ours. They use far less in the way of air planes and pilots and way way more in the way of precision long-distance missiles….which they’ve shown in Ukraine to be very effective, and that’s before giving credit to their hypersonic missiles. They didn’t take Kiev not because they couldn’t but that clearly hasn’t yet been an aim. They’ve been going methodically in Donbass because it’s very heavily bunkered and Russia is good at attrition.

With that as background, the thesis of the Wall Street Journal is Russia has a primitive military because it doesn’t used modern commercial logistics. It also makes claims about Russia abandoning equipment and running out of fuel that have been debunked by experts . Photos of dead tqnks and armored vehicles have been repeatedly shown to be Ukraine equipment, or from Donbass years ago, or from completely different theaters.1 For convenience, see Larry Johnson here starting at 8:20 for an assessment of Russia’s performance early in the conflict.

Let’s turn to the discussion of trains and logistics:

Russian forces have advanced in eastern Ukraine over recent weeks behind overwhelming artillery barrages, a shift in fortunes made possible by better access to rail lines delivering tons of ammunition and other supplies.

Russia’s military depends so heavily on trains that it maintains an elite Railroad Force, a service branch once common in countries through World War II. The unit has camouflage-painted armored train cars equipped with antiaircraft cannons and artillery to guard supply trains, and its troops are trained to repair bombed tracks while under enemy fire. Russia’s Defense Ministry said it has restored 750 miles of track in the land corridor it now controls in Ukraine’s southeast.

We then get to this part:

But Russia’s heavy reliance on train transport, a 19th-century technology, reveals critical gaps in its logistics, the coordinated transfer of supplies. Russia’s struggle to supply troops away from rail lines has slowed its invasion and contributed to catastrophic failures in its early offensives to take Kyiv and Kharkiv.

This is false. Russia depicted is campaign as a special military operation. It clearly did not send enough troops to take Kiev. That was design. Kharkiv looks more like an intelligence failure (this may have been one of the cities where senior officials signed “no contest” letter and were either shot or were double dealing).

Clausewitz, which treats politics and war as integrated. Russia’s supposed terrible first phase not only got Ukraine to the negotiating table but won such significant concessions in Istanbul at the end of March that the UK and US had to order Ukraine to repudiate them.

Now to the argument about railroads and logistics: Unlike the U.S. and other countries that have adopted modern military logistics, Russia has largely remained wedded to traditional Soviet-era methods. It isn’t just a sign of the military’s failure, according to Western officials. The shortfall results from a lack of modernization in Russia’s economy.

Russia boasts one of the world’s largest military forces, equipped with nuclear submarines and intercontinental ballistic missiles, but it has few shipping containers, forklifts or pallets of the kind the U.S. is using to speed supplies into Ukraine, according to logistics experts.

1 If you’ve been at all following the war, you can see clear fakery in the article. For instance, it claims to have overheard a Russian soldier “over an open frequency.” As Scott Ritter has stressed, again repeatedly, any stories claiming to have captured Russian telecommunications are obviously false. Russia uses only secure comms and we have not cracked them. Russian soldiers have their phones taken from them and understand full well using any non-military device reveals your location and an invitation to get you and your companions killed pronto.