As our companion post today shows, many eyes are on the increasingly desperate energy situation in Europe, as electricity prices keep marching higher with no relief in sight. And this is August, when energy demands will be more severe come the fall and winter. Yet despite Ukraine having no realistic chance of beating Russia and European societies paying enormous and rising costs, EU leaders are too arrogant and insulated to save the lives of their own and Ukraine citizens by trying to negotiate with Russia.1

With the Biden administration insistent on presenting the US economy as strong despite accelerating inflation and deteriorating fundamentals, many in wealthy Democratic party enclaves no doubt think things are still hunky dory, absent some decay in their securities portfolios and maybe their real estate value.2

The new Bloomberg story, A ‘Tsunami of Shutoffs’: 20 Million US Homes Are Behind on Energy Bills, paints a starkly different picture. Lower income and otherwise precarious households are already showing signs of severe stress due to big jumps in the costs in “must have” categories, namely food, energy, shelter. Winter in the US may not be as widespread a disaster as in the UK and Europe, but plenty of people will be having to decide how to get by with not enough food and heat.

The Nice household is one of some 20 million across the country—about 1 in 6 American homes—that have fallen behind on their utility bills. It is, according to the National Energy Assistance Directors Association (Neada), the worst crisis the group has ever documented. Underpinning those numbers is a blistering surge in electricity prices, propelled by the soaring cost of natural gas. 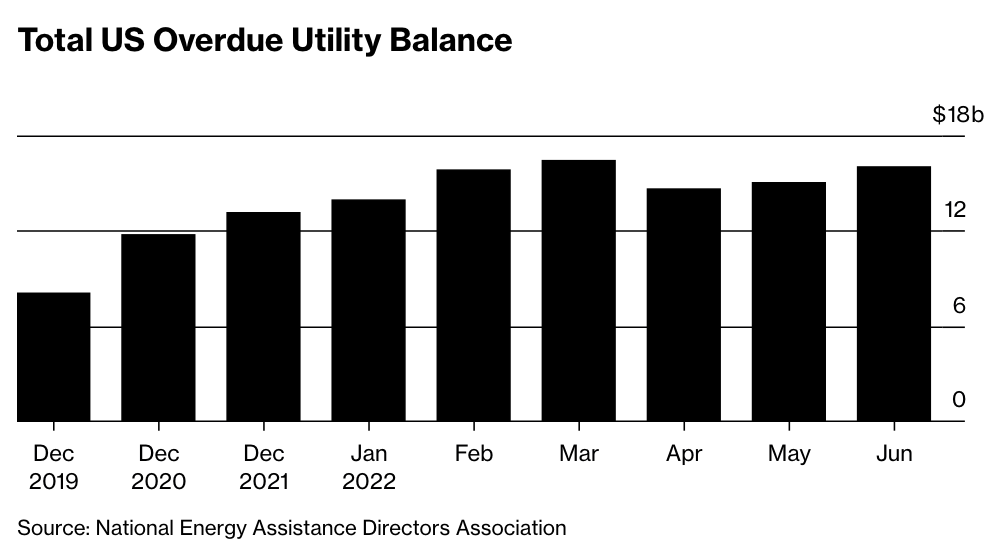 The power bill crisis is even more acute in Europe, where the spike in natural gas prices has been far greater in the wake of Russia’s invasion of Ukraine. Policymakers there have sprung into action, throwing billions of euros in aid at struggling families to help them pay bills. There’s been no meaningful talk of doing anything on a similar scale in the US, where the hand-wringing has been dedicated, as always, to the gyrations of gasoline prices at the pump.

Utility shutoffs can have deadly consequences, though, a risk that’s becoming more palpable as summer heat shatters records. Already gut-punched by soaring prices for just about everything, more and more people are facing a choice among food, housing, and keeping the power on. “I expect a tsunami of shutoffs,” says Jean Su, a senior attorney at the Center for Biological Diversity, which tracks utility disconnections across the US.

Notice the mention of the EU providing energy relief. That’s not the sort of thing the US or US states customarily provide, but the specter of Dickensian level distress plus homes at risk of pipe bursts might jolt officials out of their usual stupor. Or will they instead go the punitive route of providing what amounts to heat shelters, warm places to go to at night….and catch Covid too? 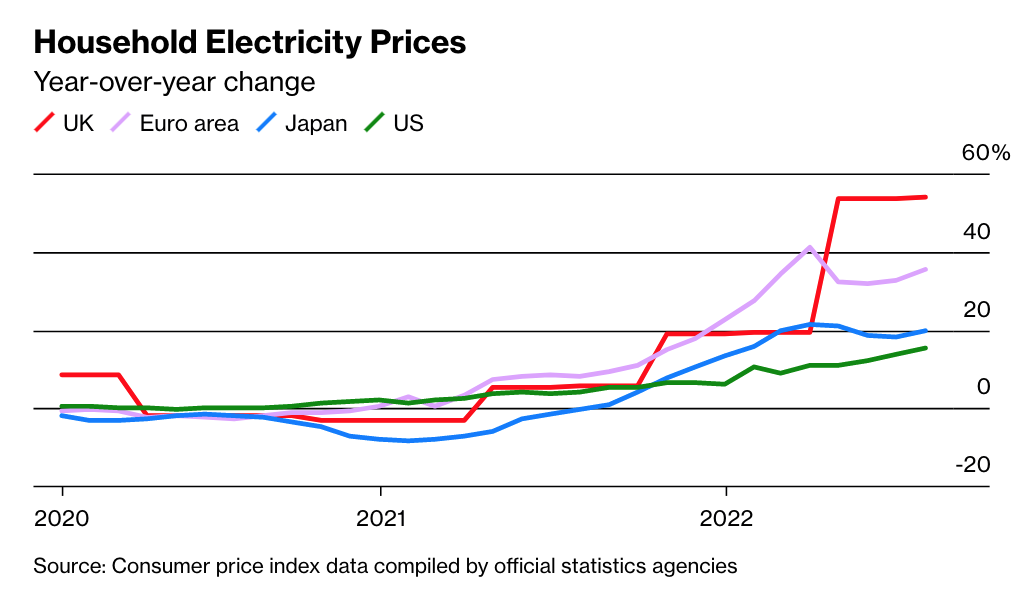 California’s PG&E Corp. has seen a more than 40% jump since February 2020 in the number of residential customers behind on payments. For New Jersey’s Public Service Enterprise Group, the total is up more than 30% for customers at least 90 days late—and that’s just since March.

The average price consumers pay for electricity surged 15% in July from a year earlier, the biggest 12-month increase since 2006. Regulation of electricity rates makes it hard for providers to immediately pass on higher fuel costs, so the recent hikes may be just the start….

In the earlier days of the pandemic, some states and utilities halted power disconnections, shielding customers like Nice who’d fallen on hard times. But those measures wound down just as inflation gathered steam….

For investor-owned US utilities, the financial repercussions of accumulating debt from unpaid customer bills are typically limited. That’s because state regulators often allow utilities to recover their losses by adding a charge for customers who are paying their bills, or taxpayers help pick up the tab.

In Nice’s case, her power was out for only three days; the nonprofit Citizens Utility Board of Minnesota helped her negotiate a payment plan with Xcel. Her experience is common: Utilities shut off customers only as a last resort, according to Xcel. About 80% of US utility customers who experience a shutoff will have service restored in a few days, Wolfe says. The remaining 20%, though, may be close to eviction or on the verge of homelessness.

While this situation is ugly and set to get much worse, some officials are trying to get ahead of it. The Federal government’s Low Income Home Energy Assistance Program, or Liheap, has $4 billion allocated for 2023, clearly too small in light of this energy emergency. A bipartisan group of Senators and Representatives are seeking more funding.

The article finally points out that Federal and state energy payment assistance is usually conceived as helping families get through the winter. But with deadly summer heatwaves, energy relief may need to become a year-round affair.

1 At this point, many commentators think Russia will not negotiate, at least on the war front. The West’s repeated bad faith behavior and the ugly and widespread show of Russia hatred means Russia does not trust the West to live up to any deal. But Russia and the West are still intertwined economically, so Russia might be more willing to talk turkey on the trade and energy front.

2 Homes in districts with top schools are the last to decline in housing bear markets.