I can see the future. The odds are very high that SBF will still be in it.

It was a reasonable assumption to think that now that SBF had been charged with Federal crimes that could result in a sentence of over 150 years, that he would start listening to attorneys and zip his lips.

Nope. To much eyerolling on Twitter, SBF launched a Substack to try variations on his already tired theme of “Nothing bad happened and it was everyone else’s fault.” Earth to SBF: Richard Nixon’s “I am not a crook” and Bill Clinton’s “I did not have sex with that woman” didn’t work very well for them either.

Not only is it just about impossible to take any of this seriously, particularly since former FTX/Alameda officials Caroline Ellison, Gary Wang and Dan Friedberg are all cooperating with prosecutors. But perhaps we can do just a tiny bit of scatology so you can rest assured SBF has not miraculously become more credible or more interested in faking concern about the harm he did to literally millions of investors.

Some of the intelligence-insulting nasties1:

SBF defends the virtue of FTX International as if that was all that needed to be discussed.

SBF keeps acting as if he had nothing to do with Alameda when that dog will not hunt. New FTX CEO Roy said that the FTX/Alameda empire operated as one business. Co-founder and CTO Wang has allegedly confirmed that he created a software backdoor on SBF’s order for Alameda to hoover, um, borrow funds from FTX. From Business Insider yesterday:

Sam Bankman-Fried instructed his FTX cofounder Gary Wang to create a “secret” backdoor to enable his trading firm Alameda to borrow $65 billion of clients’ money from the exchange without their permission, the Delaware bankruptcy court was told Wednesday.

Wang was told to create a “backdoor, a secret way for Alameda to borrow from customers on the exchange without permission,” according to FTX’s lawyer, Andrew Dietderich…

“Mr Wang created this back door by inserting a single number into millions of lines of code for the exchange, creating a line of credit from FTX to Alameda, to which customers did not consent,” he added. “And we know the size of that line of credit. It was $65 billion.

SBF keeps claiming US customers were onboarded only to FTX.US. It appears this could be easily circumvented by using a VPN and the sort that was drawn to crypto for money-laundering purposes would likely work that one out.

SBF predictably omits North Dimension customers, who were snookered into bypassing FTX entirely and sending funds supposedly destined to FTX via a fake electronics retailer that sent the funds to Alameda. As a different Business Insider story summarized:

In the sprawling drama of Sam Bankman-Fried’s fallen crypto empire, the obscure, low-profile North Dimension played a key role in putting FTX customer funds into the hands of affiliate Alameda Research and SBF’s other ventures.

And according to NBC News, North Dimension operated a fake online electronics retail shop, which has now been disabled and archived. The website did not disclose any connection to Bankman-Fried or his companies.

The SEC complaint against ex-Alameda CEO Caroline Ellison and FTX cofounder Gary Wang — who have admitted to wrongdoing — alleges that FTX told clients to wire funds to North Dimension if they wanted to trade on the crypto exchange. But those were then used to fund Alameda’s trading activities.

SBF again harrumphs that FTX.US was solvent. So what if some pretty-inconsequential-in-the-total-bucks-scheme-of-things of 130 legal entities were OK? That doesn’t excuse the ginormous amount of customer monies that went poof elsewhere.

This argument also smacks of SBF losing whatever legal plot he had. The “US customers all whole” looked like an attempt to contend that the US authorities had no jurisdiction because nothing bad happened to US customers. As an aside, that conveniently ignores fraud on US investors, as in Sequoia and all the others that staked FTX entities. That’s a big part of the SEC filing against SBF. That type of securities fraud was what landed Elizabeth Holmes in jail. But the “US investors unscathed” appeared to be a big leg of the case against extradition….which is no longer germane.

SBF acts as if what he says about FTX and Alameda financials can be believed. SBF provides several thin fables in Excel form, like this: 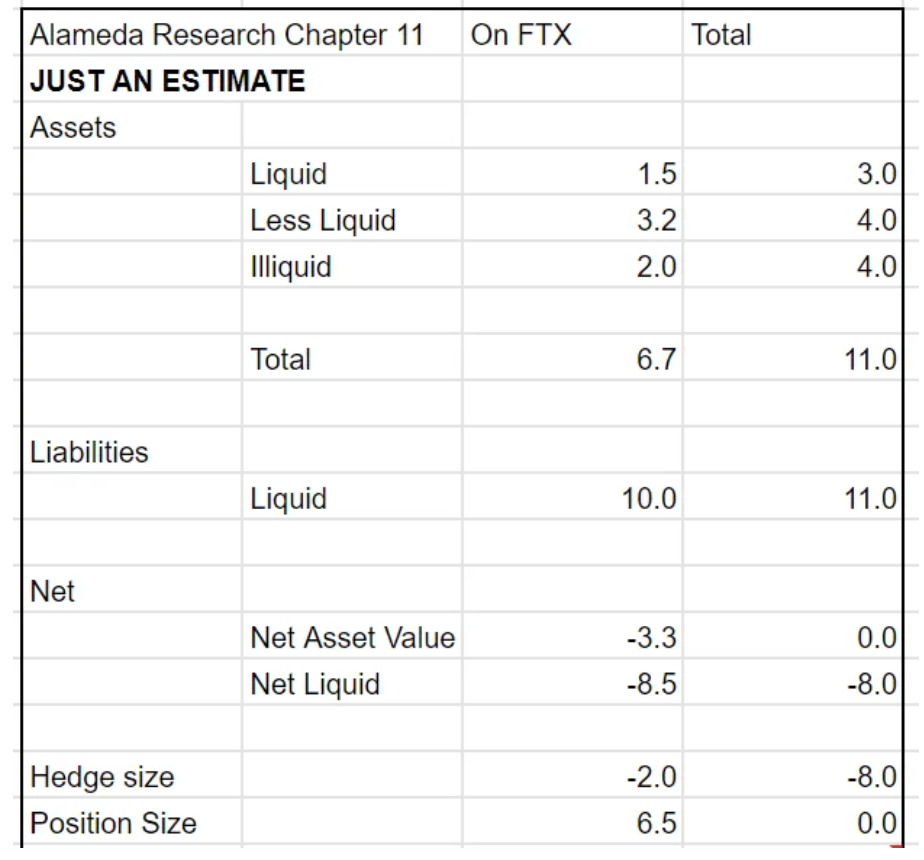 First, SBF claims he was not involved in Alameda in recent years, yet presents himself as able to provide a reasonable accurate if very high level balance sheet at various points at time. This is with him repeatedly whinging he has no access to any FTX or Alameda information.

Second, new FTX CEO John Ray has gone on at length about how the FTX empire is hands down the worst records disaster he has ever seen, and that he and his team will have to attempt to reconstruct much if not all of what was up forensically, from the bottom up. So even if SBF suddenly developed a Putin-level memory, anything SBF can dredge up from those days is garbage in, garbage out, because the books were no good.

Third, in an attempt to fend off egg-throwing over attempts to make claims about FTX/Alameda financial, SBF trotted out sections of a clean accounting letter. FTX International’s “never heard of them” accountant Prager Metis does not claim to have a practice in financial services, and in the industries where it says it has expertise, the entertainment and music industries, it lists no clients. Moreover, Coinbase ferreted out that its “entertainment” seems to be on the raunchy side. Mind you, sex industry businesses have just as much right to solid record-keeping as anyone else. But they are generally pipsqueaks compared to FTX.

Yes, there is more, but that’s already more effort to parse than SBF warrants. Some additional observations:

And poor Caitlin Ostroff had to perform the thankless task of writing a Wall Street Journal story on SBF’s Substack, meaning she had to go the “just the facts” route as opposed to heaping well-warranted scorn on it. But she managed to get some revenge:

heh whoops that was unintentional, good catch–think there shouldn’t be a paying option anymore…

Sadly, what SBF’s insane insistence on trying to sell what no one is buying, his reality-untethered version of The Persecution and Assassination of Sam Bankman-Fried As Performed by the Inmates of the Asylum of Cryptoland Under the Direction of the Department of Justice, tells us he will never shut up. Even if he lands up in a Federal gaol for a very very long time, he will do everything in his power to get heard. Substack. Twitter. Articles if anyone will have him. Rumble. Rokfin. YouTube. And if the authorities decide to choke off media and publishing outlets, it’s not hard to imagine SBF would work to create a ginormous Pen Pal following.

In fact, obsessive dedication to a task or hobby is a survival strategy in prison. SBF already has staked out one, his tiresome, endless denials. From The Marshall Project:

The first time I heard someone use the term “bid” was on my first day in federal prison, just four days before my 21st birthday…

Most new guys just end up lying in bed on their first day; the bunk becomes a sanctuary, a safe space where they hide from others, as well as a new reality — as if you could just go to sleep and one day wake up and suddenly everything will be back to normal. After watching me lie in bed all day, my celly — a skinny, middle-aged dude from Detroit — tried to offer some words of encouragement.

We went back and forth on the details. It seemed like an arcane term that didn’t really make sense until you’d lived in the system for a while. From what I could gather, the word seemed to derive from the noun “bit,” pertaining to the length of a prison sentence, much like a “stretch” or a “stint.” Something like: “This seven-year bit is a fuckin’ bummer.”

“Bid” was something entirely different, more like a purpose or raison d’être. It was all about how you did your time, like finding a hobby or hustle to get you through your bit. For many guys, it was about winning, no matter what the endeavor was. Others just wanted to make money. Some guys used it simply as a way to occupy their minds. For everyone, though, it was all about escaping the slog of captivity. My celly told me he bid off a lot of things, but mostly just gambling — although he did like to dabble in some prison hooch from time to time. He said if I could find this thing — this sense of purpose — it would make all the difference in my life. Without it, he said, my sentence would feel like an endless misery. “Do the time,” he said. “Don’t let the time do you.”

All across the compound, there were countless ways of bidding, from gambling to religion, education to gang life, sex, art, and prison jobs (the average prisoner only made about 10 to 50 cents per hour). Sports were a popular way to bid….Weightlifting seemed to be the most popular form of bidding. …

Sometimes, perhaps inevitably, certain bids overlapped, propped up by their own sub-economies. Some guys bid off of gambling on the games — basketball, softball, soccer — while others sold food to the crowd. Cooking homemade (in other words, cell-made) food was probably the most common form of bidding. To do this, the cell chefs would often rely on overpriced commissary items, which they would use to concoct elaborate rice bowls, burritos, even pizzas, using just a microwave and simple ingredients like packaged meats, ramen noodles, and seasoning salt. Even if only momentarily, these meals gave you comfort and escape from the everyday wretchedness of prison life.

So we can already guess at what SBF’s bids are likely to be. Vegan home cooking. And doing everything he can to tell a story with him at the center. Perhaps he’ll keep beating the “I was done wrong” horse. Perhaps he’ll try a new ruse, like coming up with a new Agey self-redemption formula so he can cast himself as a star behind bars.

The one silver lining, from the patience-strained, finance-literate audience perspective, is that SBF’s loquaciousness not only increases the odds of success prosecution but also the judge throwing the book at him in sentencing. He’s not manifested any willingness to admit guilt and show remorse, and he’s dug himself in so deep that it’s hard to see how he could pull off a Damascene conversion.

But he will not go away quietly. And even though SBF’s body may wind up being locked up, it is likely the public still won’t be fully protected from him.
____

1 I wanted to say “turdbits” but Lambert said no.