Should index funds be illegal?

Should index funds be illegal?

They’re All Friends in the Index
Matt Levine
Bloomberg, July 20, 2020

Matt Levine is a Bloomberg Opinion columnist covering finance. He was an editor of Dealbreaker, an investment banker at Goldman Sachs, a mergers and acquisitions lawyer at Wachtell, Lipton, Rosen & Katz, and a clerk for the U.S. Court of Appeals for the 3rd Circuit.

You know the theory. Common ownership of multiple companies in the same industry by big diversified institutional investors should cause the companies to compete less: If all their profits are going to the same place (the investors who own all of them), then no one should care about which particular company earns the profits; all they should care about is that the total profits are as high as possible. So nobody should compete on price; they should raise prices, not care about market share, and make total profits as high as possible to please their common owners.

It’s not really a theory about index funds, but I sometimes jokingly call it “should index funds be illegal” because the rise of institutional common owners is connected with the rise of big index funds. The archetypal common owners are BlackRock and Vanguard and State Street, the “Big Three” index-fund providers, who by necessity own lots of competitors in lots of industries.

So the implication is that, when Company C is added to the S&P 500, the stocks of Company A and Company B should go up, since they now face less competition.

One way to think of it is that being added to the S&P 500 is a little bit like a merger with the rest of the S&P 500. Once you are in the S&P 500 club, you are kind of under common ownership with every other company in the S&P 500. Not exactly, of course: There is no formal corporate structure combining all of the S&P 500, every S&P 500 company is owned by tons of non-indexed and non-overlapping investors, lots of non-S&P-500 companies also have lots of indexed and overlapping investors, etc., this is all a matter of degree and I have exaggerated it a lot here.

That is the abstract of “Testing the Theory of Common Stock Ownership,” by Lysle Boller of Duke and Fiona Scott Morton of Yale. From the paper:

Consistent with previous literature, we find that the stock prices of index entrants increase at the time of entry likely due to both demand and common ownership effects, and we provide evidence that the size of this increase is linked to the size of the change in institutional ownership that results from index entry. Most strikingly, we find that competitors who are themselves index incumbents incur higher abnormal returns upon the entry of their rivals when compared with non-incumbent competitors. This finding is supported by a null result for two control groups. Entrants that do not experience an increase in institutional ownership do not generate similar spillover effects to their rivals and competitors that are not index incumbents do not incur higher abnormal returns.

Being added to the S&P 500 is good for a company’s stock, but it’s also good for its competitors’ stock, as long as they are also in the S&P 500. Because they are all friends, there in the S&P 500; they all have the same owners and are working toward the same goals.

If you’d like to get Money Stuff in handy email form, right in your inbox, please subscribe at this link. Or you can subscribe to Money Stuff and other great Bloomberg newsletters here. Thanks! 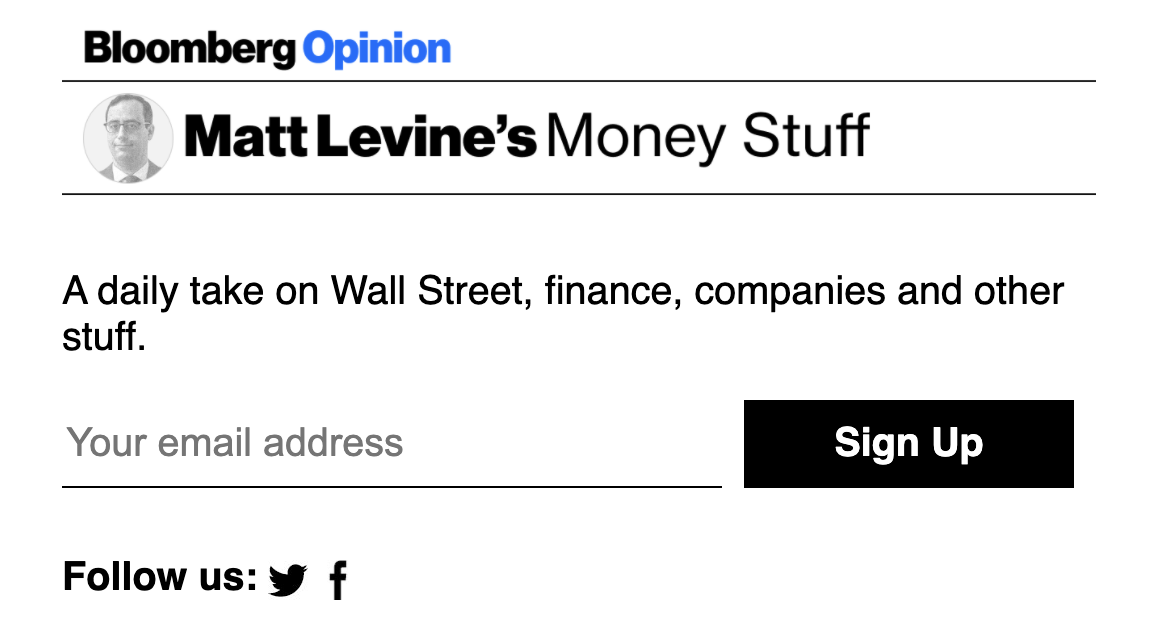