Yves here. In addition to showcasing Hubert Horan’s epic Uber series, we’ve also taken a harsh look at venture capital, and most of all the unicorn hype, more broadly. For instance, we warned in 2017: Fake Unicorns: Study Finds Average 49% Valuation Overstatement; Over Half Lose “Unicorn” Status When Corrected.

We have to confess to being old enough to remember the dot-com, and then the dot-bomb era. While that frothy period did produce some durable enterprises, it also featured inanities like Boo.com and the Time Warner-AOL deal.

And CalPERS really ought to thank us. Remember that the giant pension fund was over-eager to launch its “private equity new business model” which included “late stage venture capital” as one of its “four pillars”. That meant late-stage unicorns, given CalPERS’ need to deploy lots of capital. Our continued prodding of the too many internal contradictions, along with CalPERS’ eagerness to pile onto fads past their sell by dates, led the initiative to be quietly abandoned. The press today announced its official death. Per the Wall Street Journal: Calpers Steps Back From Four Pillars Strategy.

By Jeffrey Funk, and a professor for most of his life, most recently at the National University of Singapore. You can follow him on LinkedIn A much longer version was just published in American Affairs. Originally published at Wolf Street

About 90% of America’s Unicorn startups, ones privately valued at $1 Billion or more, were losing money in 2019 or 2020. According to my recent article in American Affairs, only 6 of 73 were profitable in 2019 and 7 of 69 in the first two or three quarters of 2020 despite most being founded more than 10 years ago.

The six profitable start-ups in 2019 included three fintech (GreenSky, Oportun, and Square) and one startup each in e-commerce (Etsy), video communications (Zoom), and solar energy installation (Sunrun). For the first few quarters of 2020, three of these firms became unprofitable (Oportun, Square, and Sunrun), and four others became profitable: three e-commerce companies (Peloton, Purple Innovation, and Wayfair) and one cloud storage service (Dropbox).

Unicorn startups are even more unprofitable than those that did not achieve Unicorn status. According to Jay Ritter, about 20% of startups at IPO time were profitable over last four years, much more than the 10% of Unicorn startups in 2019 and 2020. Thus, not only has profitability dramatically dropped over the last 40 years among those startup doing IPOs that went public, down from 80% to 90% in early 1980s, today’s most valuable startups—those valued at $1 billion or more before their IPOs—are in fact less profitable than startups that did not achieve $1 Billion in their IPO valuations.

Even worse, a remarkably large fraction of start-unicorns have high levels of unprofitability, as shown in the chart below. 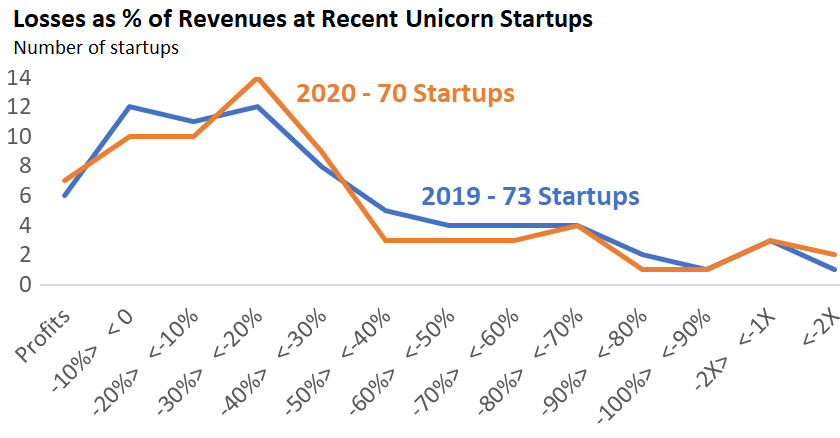 How Many of These Startups Might Become Profitable in the Near Future?

One way to address this question is by looking at the changes in profitability during 2020, a year in which some Unicorn startups benefited from the lockdown and the higher revenues and willingness to pay that these lockdowns brought. Cloud computing services, food delivery, e-commerce, and Internet entertainment benefited from the lockdown enabling people to work, shop and amuse themselves while stuck in their homes.

Consider the 59 Unicorn startups for which full 2020 income results are now available. Twenty-six had higher ratios of income to revenues, 29 had lower, and four about the same, despite most achieving more than a 30% increase in revenues and some more than 100% in 2020 than in 2019. This simple counting suggests that overall, we shouldn’t expect a vast change in profitability in the near future.

Looking in more detail, consider those startups that went from unprofitable in 2019 to profitable in 2020 or that achieved an increase of at least 0.20 in their ratios of income to revenues between the two years. These startups are listed in the table below, along with their quarterly income since the fourth quarter of 2019.

If a startup is making progress towards profitability, we would expect them to show continuous increases in their ratios of income to revenues, and not just a one or two quarter improvement during the most severe months of the lockdown, when people were willing to pay almost anything for food, cloud computing, mattresses, exercise bikes, and other products and services.

The table below shows that most startups achieved one or two quarters in increases (figures highlighted in red), and not a series of increases that would suggest strong trends toward profitability.

Lemonade, Sumo Logic, Cloudera, Door Dash, Dropbox, and Fiverr are the most conspicuous with big reductions in losses for the second and/or third quarters of 2020, but then increases in the fourth quarter. Somewhat better, Peloton and Wafair show a bigger trend towards profitability but still declining results in the last one or two quarters of 2020.

A lack of continuous improvement in profitability throughout 2020 suggests that the ratio of losses to revenues for these startups may not improve once the lockdowns are over and ratios for some startups may even worsen. 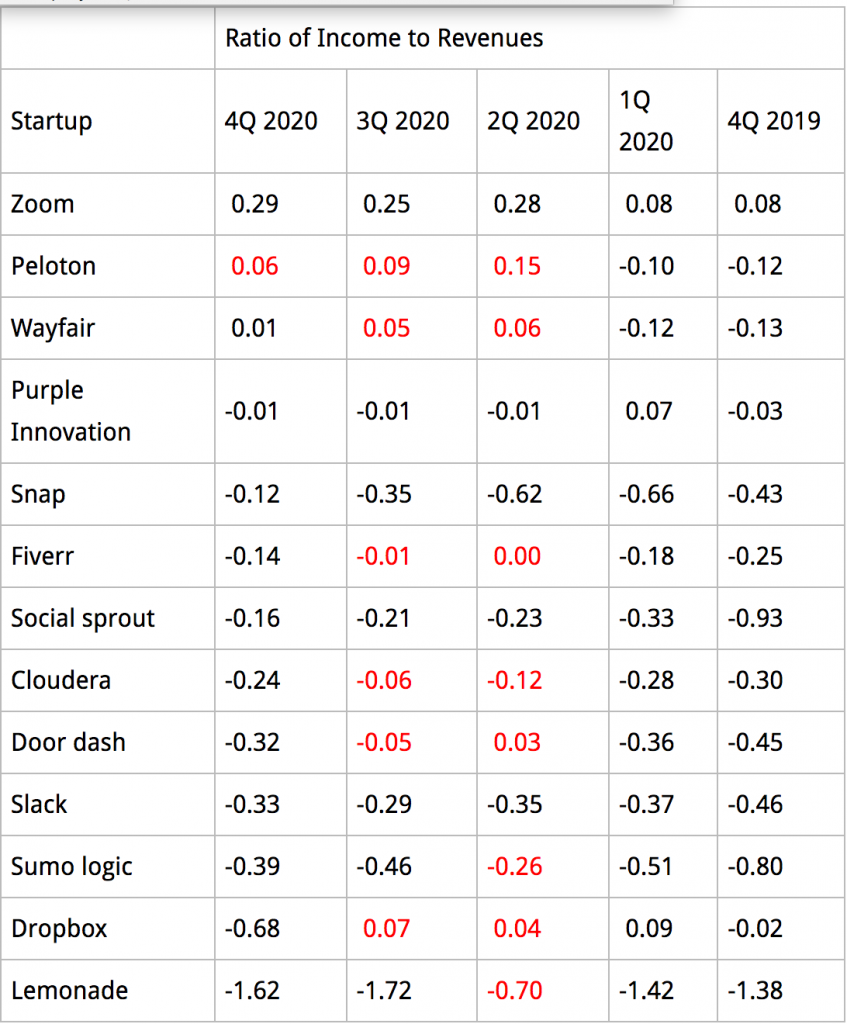 Overall, these data suggest that most Unicorn startups will struggle to achieve profitability in the future and thus the small percentage of Unicorn startups currently profitable (about 10%) presented at the beginning of the article, will probably not change much in the near future. The percent profitable may rise to 15% or 20%, but not much higher without dramatic changes in technology or scale.

The startups that were profitable in 2019 but went unprofitable in 2020 (Oportun, Square, and Sunrun) may return to profitability, but some of those who became profitable in the first two or three quarters of 2020 (Peloton, Purple Innovation, Wayfair, Dropbox) may become unprofitable after the lockdowns end.  Those experiencing continuous reductions in ratios of losses to revenues such as Snap and Social Sprout may also achieve profitability in the near future.