In the major shopping corridors in Manhattan, where sidewalks are lined by ground-floor shops, retail rents have been declining for years – and not just by a little, but by 20%, 30% or even over 40%, amid ballooning vacancies. The brick-and-mortar retail meltdown, Manhattan style. Then came the Pandemic. In the spring during the lockdown, as hospitals and morgues were overwhelmed, the market for street-level retail space froze up. Later in the year, retailers and landlords started making deals again, with “asking rents” falling by as much as 25% year-over-year, and by as much as 55% from the peak in prior years. And “taking rents” – rents actually agreed on – were reported to be even lower.

“These decreases are historic, with 8 corridors experiencing their lowest price per square foot averages in at least a decade,” the Real Estate Board of New York reported in its just released Fall 2020 Manhattan Retail Report. “While asking rents dropped significantly, taking rents are reported to be much lower, with some brokers citing average differences between asking and taking rents around 20%.”

In 11 of the corridors, available retail space further increased, with increases ranging from 6% to 67% compared to a year ago, “which reflects a substantial slowdown in Manhattan retail transaction volume and creates challenges in establishing overarching economic trends,” the REBNY said in the report.

Asking rents in two shopping corridors had bucked the declines through 2019. But in 2020, they also declined: In Downtown, on Broadway between Battery Park and Chambers Street; and in Harlem, on 125th Street, from the Harlem River to the Hudson River.

Some of Manhattan’s most expensive shopping corridors are in Midtown. On Broadway and 7th Avenue, between 42nd Street and 47th Street, the average asking rent in the fall of 2020 dropped by 13% from a year ago to $1,653 per square foot per year, having collapsed by 55% from the peak in 2015.

But even after that rent collapse, it’s tough to imagine how a 1,000 square foot retail store, paying a mind-boggling $1.65 million in rent per year, could ever make money. And of course, some of these shops aren’t designed to make money. They’re showcases for expensive fashion brands. But if the fashion brands lose appetite for expensive showcases, what else remains? 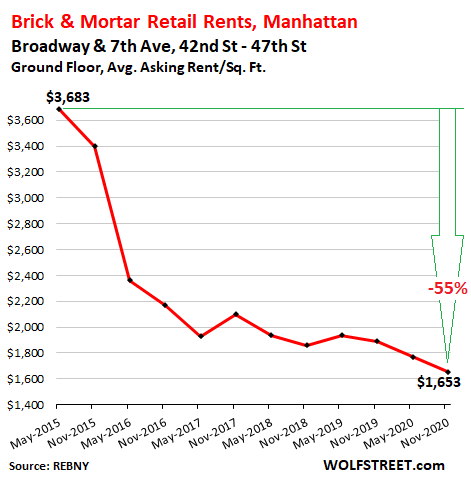 And the two stretches on Fifth Avenue: On the first, from 42nd Street to 49th Street, the average asking rent dropped by 16% year-over-year, and by 48% from the peak in 2016, to $717 per square foot per year, with 15 availabilities in the corridor: 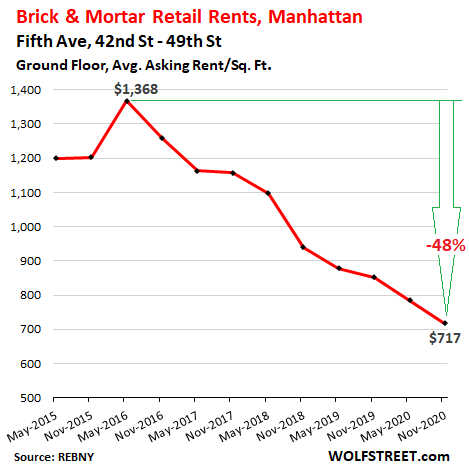 But the peak in asking rents was in 2018, when landlords decided, in a what-the-heck moment, to ignore reality and ask for the sky. It didn’t work, retailers didn’t bite, and asking rents reverted to trend. In the fall of 2020, they were down 33% from the illusory peak in 2018: 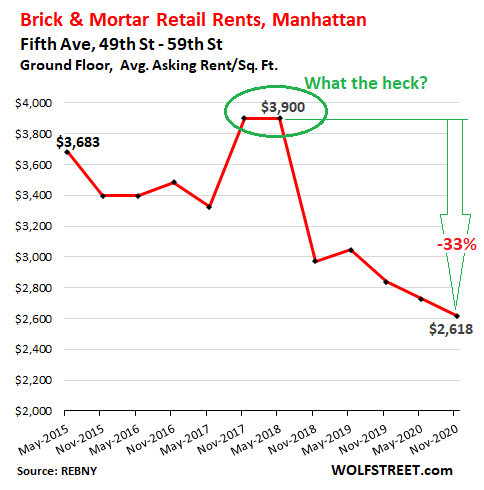 The average asking rent on West 34th Street between Fifth Avenue and Seventh Avenue fell by 16% year-over-year to $441/sf, having now plunged by 56% since 2015: 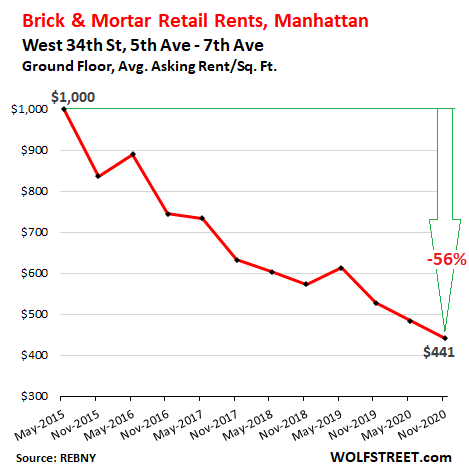 On Madison Avenue, in the shopping corridor between 57th Street and 72nd Street, the average asking rent dropped by 13% year-over-year in the fall of 2020, to $784 per square foot per year, and was down 54% from the first half in 2015, amid 55 availabilities! 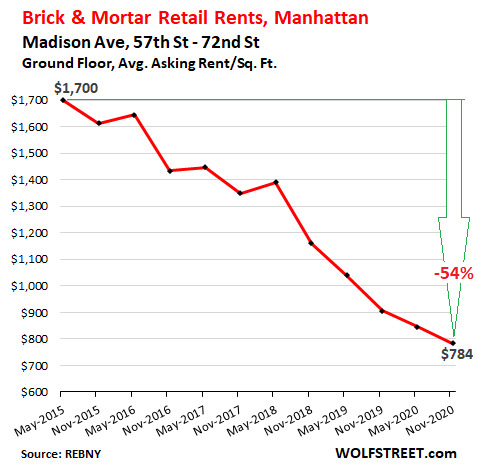 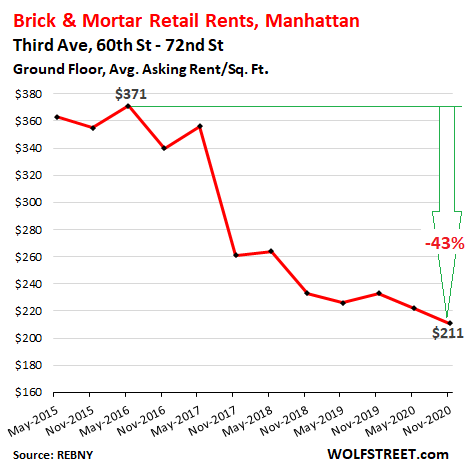 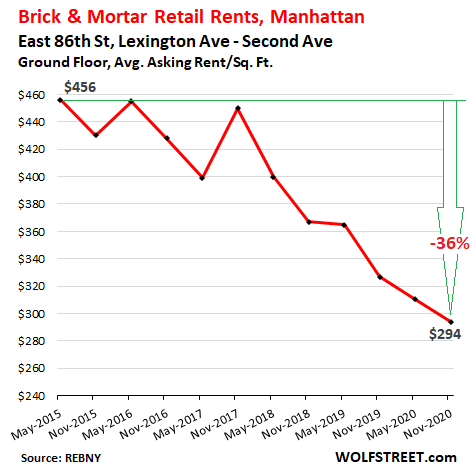 This is an example of just how local real estate can be, and how some spots can defy general trends, until they can’t. Two shopping corridors followed the trends as outlined in the charts above, but another did the opposite. 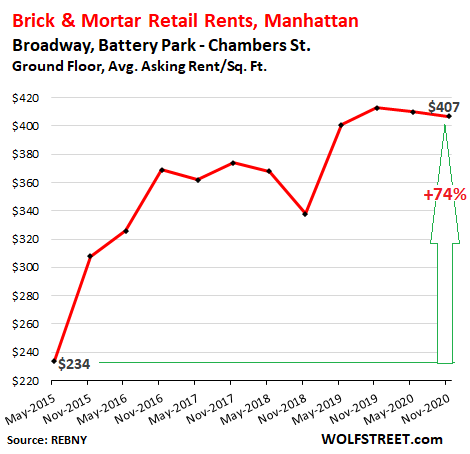 But then, you guessed it, there’s the other extreme; on Broadway between Houston and Broome, the average asking rent plunged by 25% year-over-year and by 62% from the peak in 2015, the biggest decliner in the bunch, amid 26 availabilities: 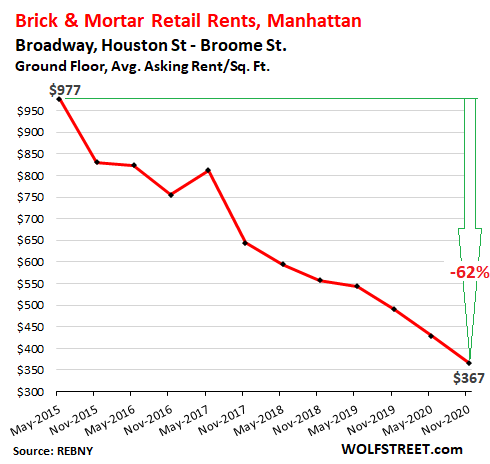 On Bleecker Street, between 7th Avenue and Hudson, the asking rent fell 9% year-over-year and 51% from the peak in 2016, amid 20 availabilities: 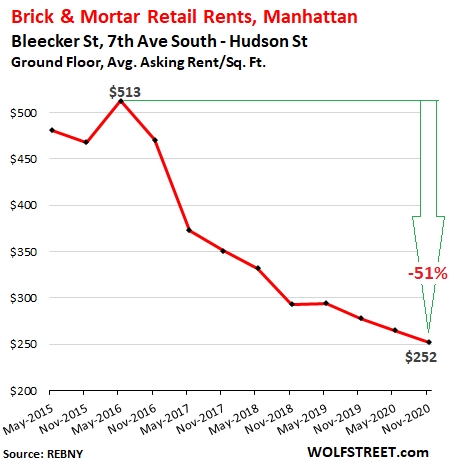 On Broadway between 72nd Street and 86th Street, the average asking rent fell 14% year-over-year and is down 42% from 2015. There were 27 availabilities: 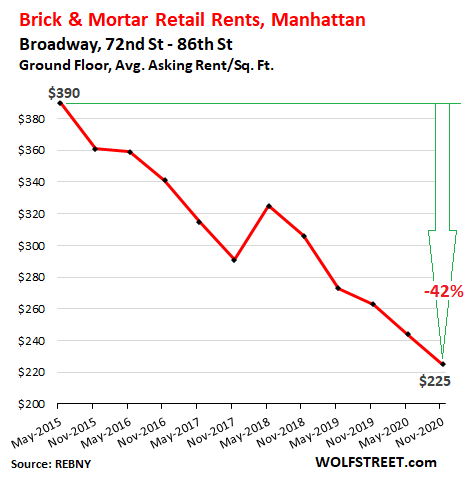 And on Columbus Ave, between 66th Street and 79th Street, the average asking rent declined 3% year-over-year and was down 35% from the peak in 2015: 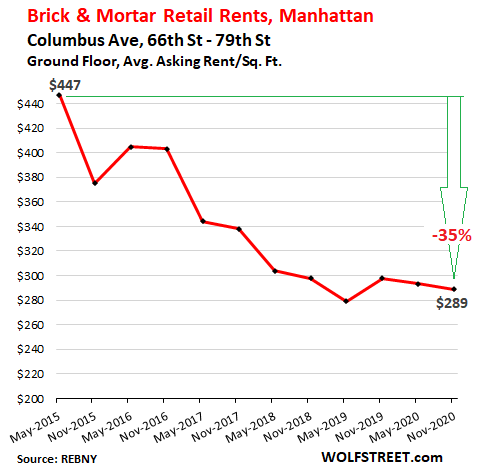 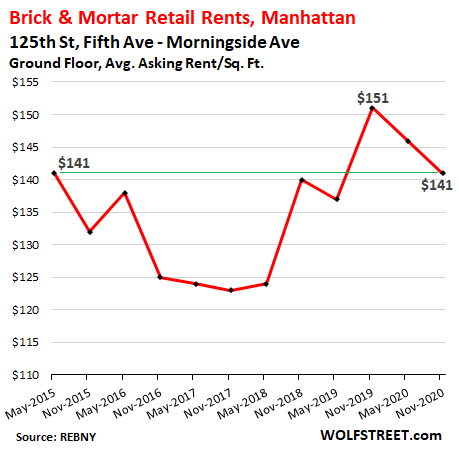 In theory, drastically lower rents would attract more interest from retailers. But the brick-and-mortar retail model is broken. Ecommerce rules. Even luxury retailers have figured out during the Pandemic how to sell their merchandise online. While grocery stores, along with bodegas in the neighborhood for last-minute purchases, and some other services-focused enterprises, such as barbershops, hair salons, and nail salons, are seen as essential by many consumers, much of the rest of retail can be and has been shifted to ecommerce. Cafes and restaurants can replace retail stores, but at some point, the street is going to be saturated with cafes and restaurants.

And when rents are too high, even though they may be a lot lower than they used to be, none of these enterprises can turn a profit. As in so many cases, the Pandemic just pushed the existing trends in Manhattan’s retail property scene to the next level.