Yves here. It’s hard to think of garbage as the basis for a feel good story. But we are running this story as “news you can use” in case you are in a city where the garbage trucks are GPS tagged and therefore if you know where your stuff wound up in the trash, you can somewhat localize where it wound up in the dump.

Bear in mind that in NYC and I assume most cities, actual lost and found, as in when people bring things to the police, is entirely different. I had a wallet stolen and remarkably, three weeks later, got my driver’s license and some credit cards (by then cancelled) back. But cab drivers are also very good about bringing things back. I once found a wallet in a cab and we detoured to drop it off at the office where its owner worked (it had a building photo ID). The driver told me of other cases where passengers had found things in the cab and handed them to him to see if he could return them. One was a purse with $4000; the woman had gotten bills to buy a suite of furniture at a “cash” price and then changed her mind when she saw it live. She was over the moon when he brought it to her and IIRC gave him $200. The flip side is not everyone is so honest. My mother left a bag in a cab. He brought it back to my building, where he’d picked her up….and dropped it off with her >$300 in cash extracted.

By Katie Honan (khonan@thecity.nyc) Originally published at THE CITY on Jan 30, 2022

Dozens of times a year, regular New Yorkers put on gloves, boots and even protective suits to dive through piles of garbage, searching for possessions that were inadvertently thrown in the trash or dropped in a dumpster.

After a few hours of searching, they sometimes find their buried treasure — lucky lottery tickets, sacred religious items, cherished family photo albums, literal bags of cash and even dentures — before it ends up on a barge, destined for a dump far away.

Theodora Adelabu knows the feeling. She was already through JFK Airport security in December, on her way home to Nigeria for her father’s memorial service, when she realized she didn’t have her blue backpack packed with items high in monetary and sentimental value.

She retraced her steps, calling family and friends who saw her early that morning as she prepared for the flight. 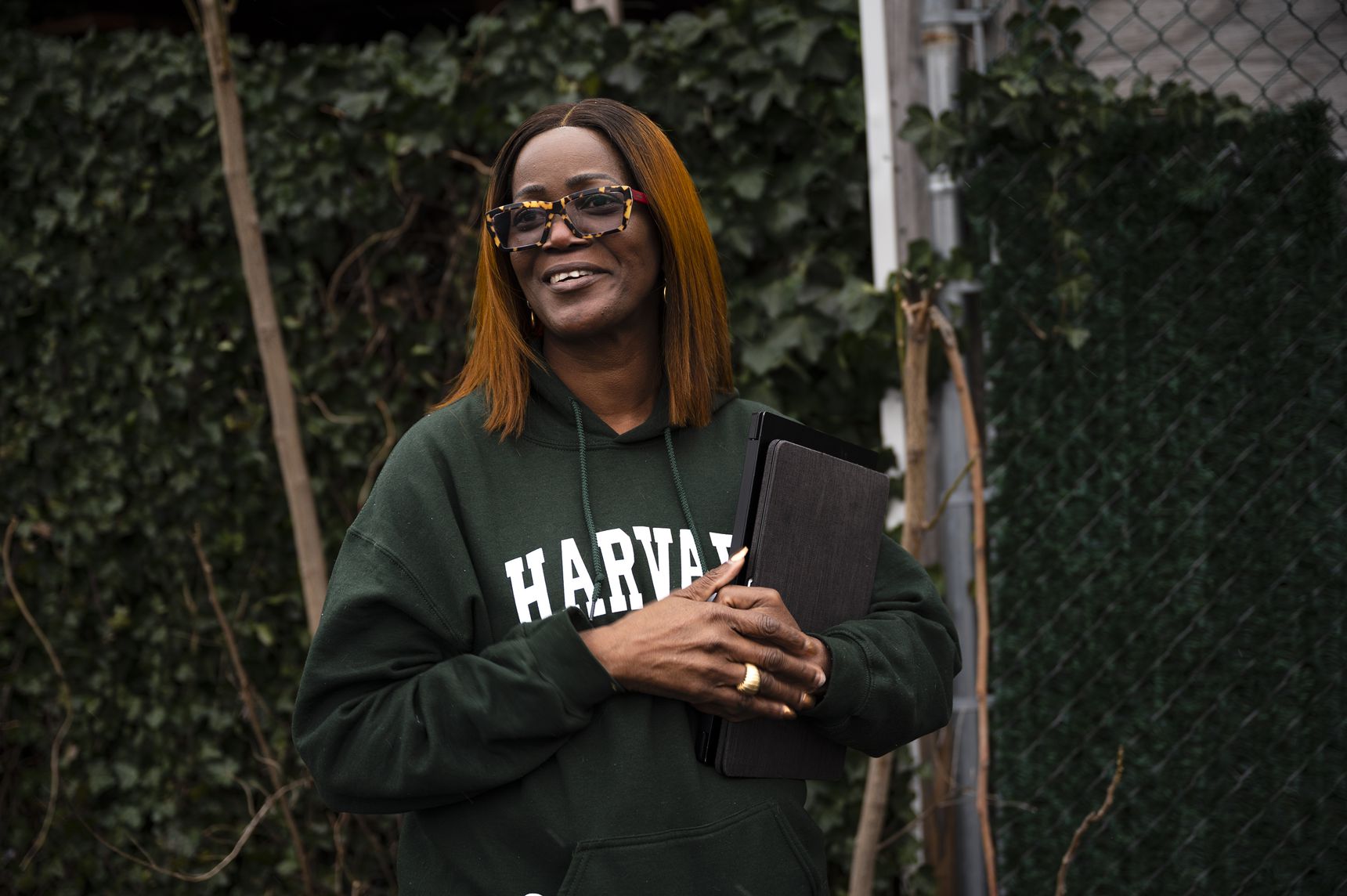 Theodora Adeladu with her personal and work computers that were tossed into a garbage truck along with thousands of dollars in cash, jewelry and traditional garments when a sanitation worker mistook it for trash. Hiram Alejandro Durán/ THE CITY
“I was panicked, I was crying,” she said. She rescheduled a flight one hour later, knowing she couldn’t leave without the bag, which had her work laptop, gold and jewelry, traditional clothing for the service — and $10,000 in cash.

Turns out, she had left her car off at a friend’s house at around 5:30 that morning and left the bag sitting outside. A neighbor she asked to look at security camera footage saw that at around 8:15 a.m. a DSNY truck came by and tossed the blue backpack in with other trash.

Members and sponsors make THE CITY possible.
Adelabu rushed to the nearest sanitation garage after Googling it, found the first employee and fell to her knees, literally, to ask for help.

“There’s something taken as trash that is not trash,” she said she told him.

He helped her stand up, she recalled, and reassured her.

“‘If we picked it up, then we’ll find it,’” he told her, suggesting she get some gloves and boots for her dig at a waste-transfer site later that day in Brooklyn, after they isolated the truck that picked up her bag.

“Before I even left the garage they were clapping, and saying, go get it Theodora!,” she said.

Hours later, she donned a protective suit to search through a morning’s worth of garbage a few hours after her bag had been picked up. 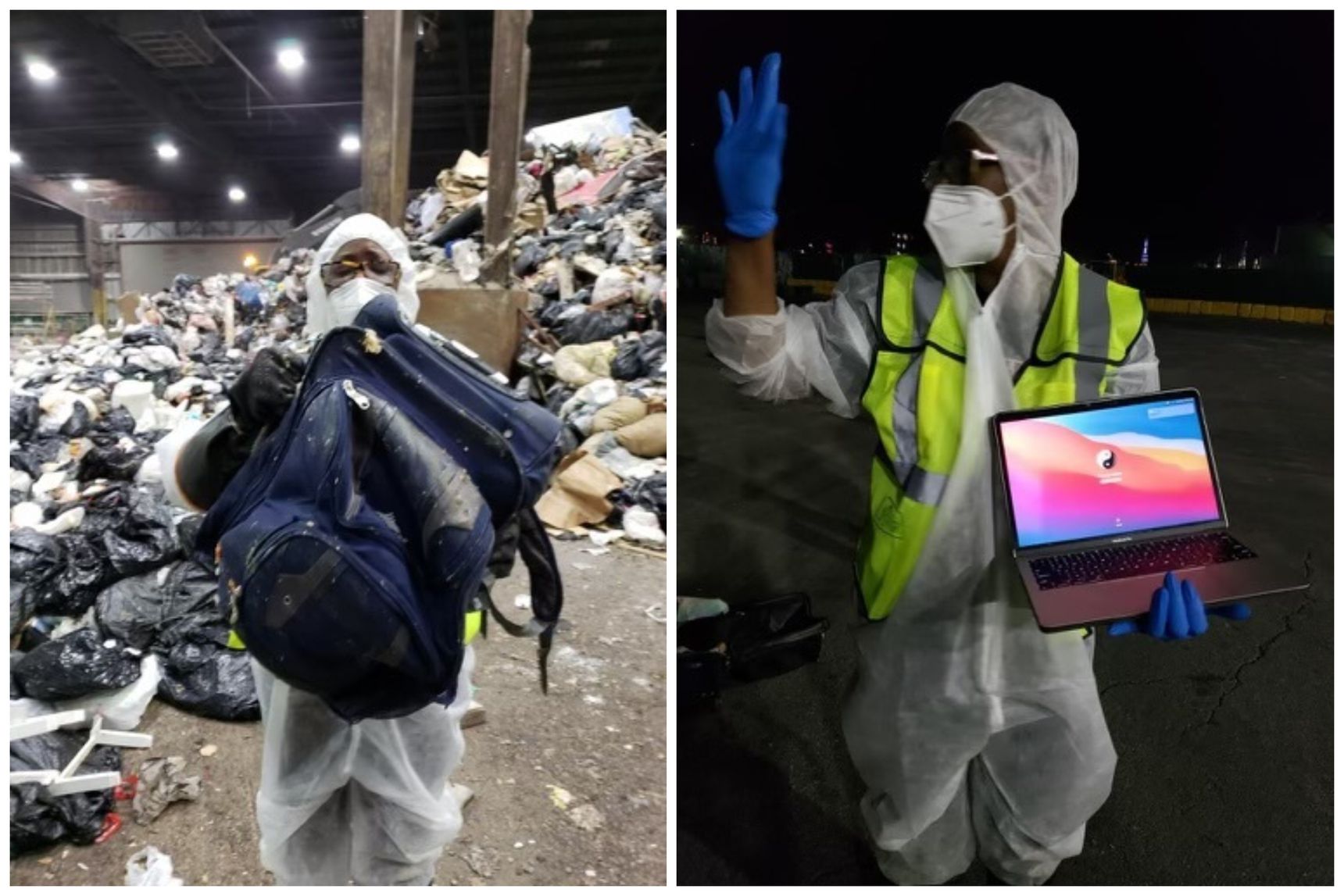 They spread trash out into eight sections, and supervisors helped her figure out where she should search first based on the address and pick-up time.

“There were diapers and spaghetti,” Adelabu said. But she was so focused on her search, “I didn’t smell anything.”

About two hours later, she spotted a dark blue backpack.

Although sanitation employees tried to temper her expectations about the shape of her laptop after a few hours in the truck, it miraculously turned on. Adelabu, who is a fourth-grade teacher in Canarsie, cleaned up her stuff, changed out of her clothes, and boarded a 9:30 p.m. flight to Nigeria.

“You don’t even appreciate what they do until you go in there and see what they do,” she told THE CITY. “It was something negligently done on my part, but they still were very very supportive.”

Sanitation picks up 12,000 tons of trash and recycling every day across the city, hauling it off to dumps outside of the city on large barges filled with containers of garbage.

It might seem impossible to find something as small as an engagement ring in all that garbage, but the department all tracks its trucks with GPS and knows when and where each pickup is made, officials said.

Yet there is only a brief window — around two to three hours — in which a person can possibly find a lost item after it’s taken off the truck and put into containers that eventually get shipped to landfills in other states. 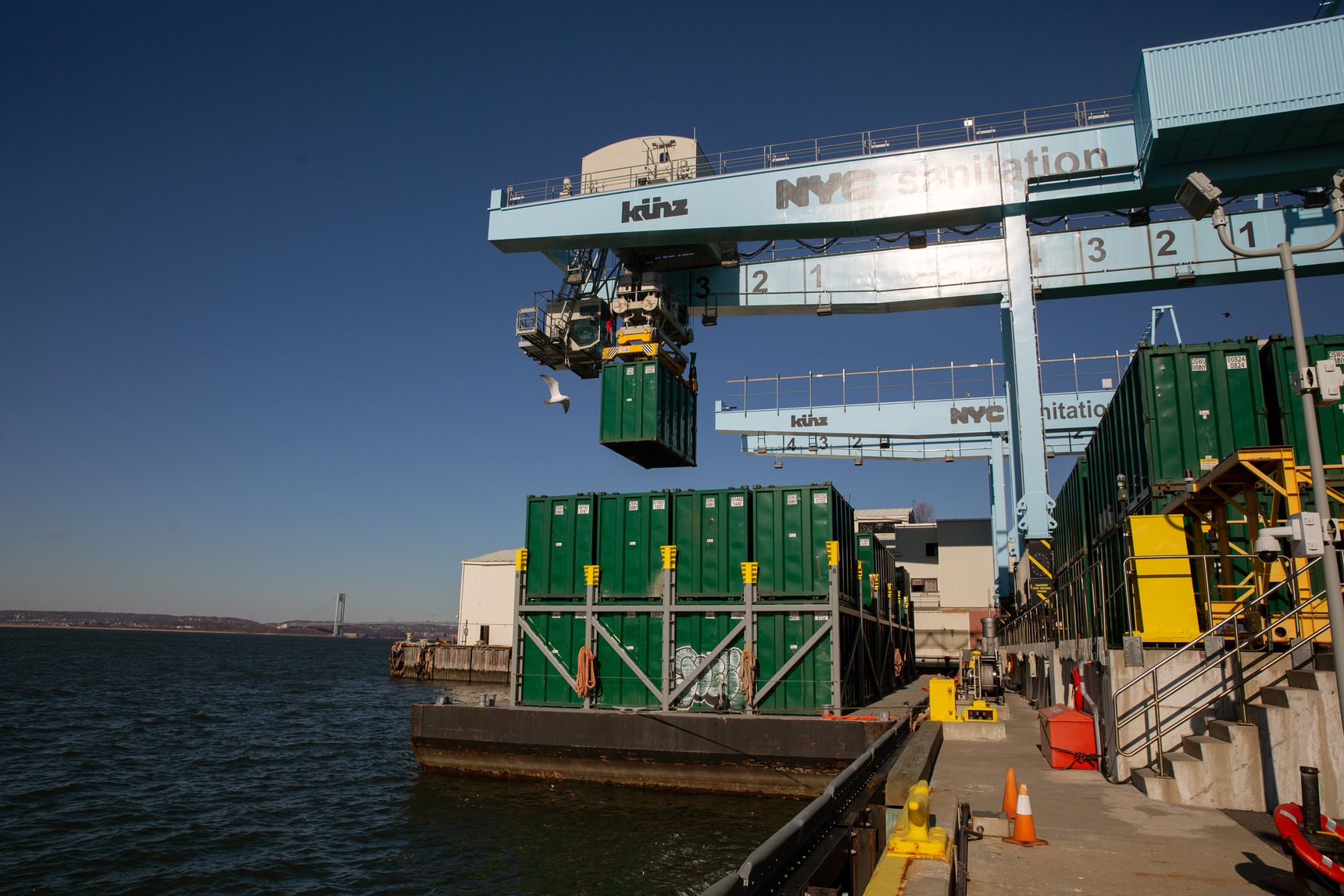 Sanitation workers place containers of garbage onto a barge at the Southwest Brooklyn Marine Transfer Station, Jan. 26, 2022.Ben Fractenberg/THE CITY
Over the last six months of 2021, the Department of Sanitation arranged 29 of these lost valuables searches, officials said.

Of those searches, 12 were successful and four were canceled, which means the person either found their valuables somewhere else or decided it wasn’t worth picking through a mountain of filth and refuse for.

All of the searches are conducted by those who lost the items, but officials help them by offering advice on where the item could be based on the time and location of the pickup, said Timothy Belmer, a supervisor and export officer with the department.

He encourages the hopeful to look for any notable items they remember seeing picked up on their blocks, like a mattress. Tossed-out mail with addresses can help, too, he noted.