The Basic Dumb Contours of the GameStop Trade

The Basic Dumb Contours of the GameStop Trade 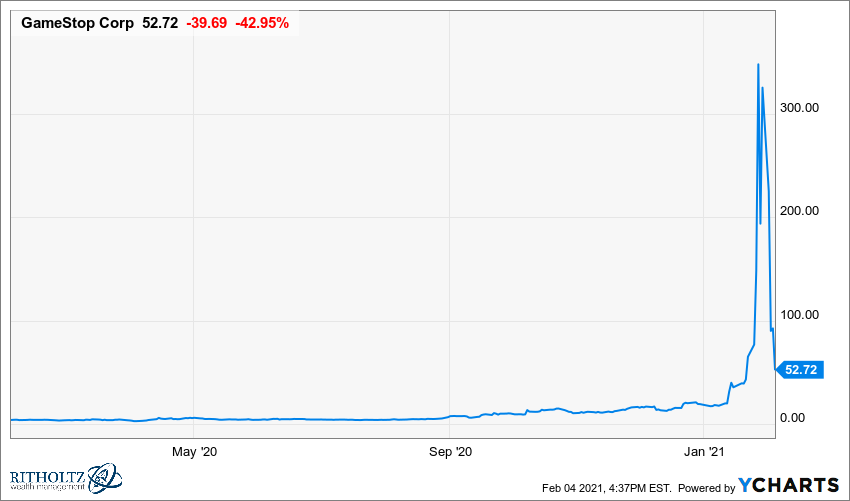 There is no one in financial journalism like Matt Levine, who pens a daily newsletter at Bloomberg Opinion. Densely written, deeply footnoted and occasionally hilarious observations about the stranger goings on in the back waters of Wall Street.

Naturally, Levine has a few thoughts on Gamestop.

Let’s start with the fun stuff:

“We have talked before about how Keith Gill [aka Roaring Kitty] worked at MassMutual, but “financial wellness education”?

After a long hard day of financial wellness education, Gill went home and engaged in some extreme financial illness to blow off steam. I am desperate to know if it leaked into his job.

Like in the last week that he worked at MassMutual—which was apparently last week???—I like to imagine that he showed up on Monday morning in a suit and told his financial-wellness classes “make sure to buy lots of low-fee index funds and pay down your highest-interest credit cards first,” and by Friday he was in a headband and sunglasses, unshaven and smoking two cigarettes, telling his classes “look the reality is that drugs are great, the only way to feel anything in life is by putting all your money in out-of-the-money GameStop calls, YOLO, wellness is an illusion.”

Not many people can make a dry subject like option gamma even readable, much less hilarious, but that’s his uniquely wonky specialty.

Next, the less fun stuff: who made or lost money, or in Levine-speak, “The basic dumb contours of the GameStop trade:”

1. People on Reddit who got into it early, like Gill, have made small or occasionally biggish fortunes.

3. Hedge funds who were short early, like Melvin Capital, have lost large fortunes.

4. Intermediaries—high-frequency traders, options market makers, brokerages—have been a bit cagey about how they’re doing, and have had a stressful couple of weeks, but there is a widespread sense that they mostly made a lot of money.

5. The financial system will survive just fine, thank you.

6. People on Reddit who got into it late have lost—well, most of the money they put in, anyway. One hopes that was mostly fun gambling money, because by the time they got in this was incredibly transparently stupid and they had to know they’d lose everything, but of course one worries. There are already stories about people losing more money than they could afford to risk, and there will be more, and that will make people angry.

The fun morphs into sad as we realize it really was a “the basic dumb contours of a pump-and-dump scheme” that led to lots of people losing lots of money, many of whom cannot afford to lose any much less all of their of their money.

Unfortunately, that’s one of the lesser, side narratives.

Indeed, I have been having lots of discussions with smart folks about this. The thinking ranges from: It is a unique alignment of highly unlikely things (one narrative), all of which came together randomly at once to create a perfect storm (another narrative), or it might be something deeper, structural and nefarious (a concerning narrative).

I find myself halfway between the alignment of unlikely and the random storm camps, but I cannot help but marvel how quickly the rapidly rotating narratives have been rising and falling, spinning as influencers all tripped over one another to produce each hot new take:

-Meme populism as a thing

-Shorts are bad! No, some shorts are good!

-Revolt of the little guy: Sticking it to the man!

-No wait, HF are  scraping Reddit for trade ideas.

Of these narratives, the last one resonates with me as the one that will be remembered decades hence. And that is a shame, because there is so much here worthy of further academic study . . .

My takes have been pretty consistent — this is fascinating but Irrelevant, a made for TV storyline that we all know how it will end — the same way these things always do; in tears.

Previously:
A Minor, Fascinating but Irrelevant, Made for TV Storyline (February 2, 2021)