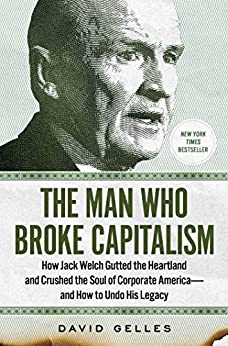 If everybody in America read this book there would be a revolution:

“The Man Who Broke Capitalism: How Jack Welch Gutted the Heartland and Crushed the Soul of Corporate America—and How to Undo His Legacy“

About fifteen years ago my dream died. You know, where the stars align and you become rich and famous. Because I realized there was no way I could do what I did and become rich. And by modern standards even entertainers are not rich. You can’t earn billions by singing.

Now you want to argue with me. Yes, there is Paul McCartney, but he started eons ago. As for Dr. Dre, he made his money on headphones. But I don’t want to go any deeper here, because this is just what the rulers of this country want, for the hoi polloi to be distracted with petty arguments.

My mother always told me I wasn’t the one. There was always someone smarter, more connected, who knew more. As for my father? He was so internalized from a rough upbringing that all he could do was rage. And then try to make up for it by being loving. He was an outsider, and knew it and owned it. If I was looking for instructions on how to be a man in society, they would not come from him. But he constantly poured out business advice, telling me to dig beneath the surface, for things were frequently not what they appeared to be, what everybody was telling you they were.

So I went to college in the dark ages, when the goal was to be a doctor or a lawyer, so you’d be set up for life, so your parents wouldn’t have to worry about you. I just read in the “Times” this morning that pay for public defenders is so bad they’ve got to take second jobs to make ends meet, never mind since Watergate lawyers have never been respected again. And although you read about MDs making beaucoup bucks, the truth is most are making a good living, far from seven figures, many not even mid six figures, working for the corporation, the paperwork will bury you otherwise. If you’ve got an independent practitioner, you’re one of the few.

So things started to change in the eighties, with Reagan. He’s another person who has to be torn down from his pedestal. This guy ruined the economy forever, single-handedly opened the door for income inequality. And Clinton, after losing traction after the ’94 election, stopped being progressive and endorsed right wing tropes, eliminating welfare benefits. And then the Supreme Court gave the presidency to Bush and it was all over.

Not that any of the foregoing people is that powerful. It’s the corporations that rule this world, and now they’re multinational, beholden to nobody. And their CEOs are seen as laudable titans.

Michael Eisner did a great job rescuing Disney from the doldrums, but was it worth a billion dollars? By time he exited the company he was its largest shareholder. How can that be? You go from being an employee to that big an owner?

You see executive salaries are way out of whack. And we can credit Jack Welch for that.

Jack Welch, the manager of the CENTURY! That’s what they called him. For meeting Wall Street analysts’ numbers year after year.

When I was in law school, my girlfriend’s father gave her a subscription to the “Wall Street Journal.” I saw this as a negative, because of its right wing politics. But as I read it I became more and more familiar with business. It’s a different paper now, the business coverage is often better in the “Times,” but if you read it on a regular basis you’ll get an idea of what is going on. Then you’ve got to connect the dots yourself.

So we’re in the go-go nineties, after the traction of the eighties, and this Welch guy is suddenly an icon and I look a little deeper and I say there is no way this can be true, this guy is obviously cooking the books. But what did I know? Isn’t that exactly what my parents told me, I was an inferior outsider looking in, sans all the facts, these people were GIANTS!

Well it turned out it was true. Now everybody knows. We can ask whether Welch literally cooked the books, as in outright fraud, but it’s clear that financial shenanigans were employed to meet Wall Street’s numbers, SO THE STOCKHOLDERS WOULD BE REWARDED!

Let me tell you how this worked, it’s not too hard. Welch invested heavily in finance. And then he would buy and sell stuff to make his numbers every quarter. Jeffrey Immelt, his successor, ultimately missed his numbers and his excuse was they couldn’t get the usual financial transactions done in the last two weeks of the quarter! I’m chuckling just writing this. People oftentimes reveal their bad behavior if you just let them talk long enough.

So, used to be corporations were a partnership with the public, the essence was its products, and the employees were seen as an asset.

But not under Neutron Jack.

First thing he did was fire employees. Not only causing them to lose their jobs, but decimating entire communities. This made the numbers look better. And when the numbers looked bad, he just bought stuff. You’d be stunned how CFOs can work the books. The recipe was simple: downsize, make deals and financialize. End result? GE stock kept going up and up. As for GE itself? It’s being broken up in the wake of Welch’s efforts. There’s no there there anymore, at least not much. And did I mention Welch made HUNDREDS OF MILLIONS OF DOLLARS in the process?

Economist Milton Friedman said a corporation’s only obligation was to its shareholders, to make them money. So America became a casino, all the jobs were shipped overseas and the business of many of these companies was finance.

But it gets worse. These companies were making so much dough that they increased dividends and repurchased their shares to make their stock go ever higher. AND THIS IS STILL HAPPENING! That’s right, you cut until you create a cache of cash, and then you distribute it and buy back shares to make your stock go up AND YOU ARE HANDSOMELY COMPENSATED FOR THIS! You’re making money, but the corporation??

But it gets even worse than this, GE was seen as the bedrock of management skills, you wanted a GE titan in charge. So all these corporations brought in GE talent which then employed the exact same recipe. Can you say BOEING?? People died there, but Welch’s protégés ruined one company after another, while they made tens of millions, hundreds of millions of dollars in the process. Even Warren Buffett, the Oracle of Omaha, he was down with firings too, after all he’s an investor first and foremost!

In other words, just about every CEO who is praised, who struts around like a king, and they’re essentially all men, is a crook out for himself. Truly. As for knowing how to run a company? They know how to cook the books and make the stock price go up. The underlying company? WHO CARES! They ultimately get fired and get golden parachutes worth tens of millions of dollars on top of all that money they got paid while they were ruining the company!

Everybody inside knows the above. It’s a club, and as George Carlin said, you’re not in it. Prior to Welch CEOs were not making these outrageous salaries. But Jack convinced Wall Street the pay packages were worth it, after all, look how much money he made for them! Forget building, never mind sustaining the underlying company. One of the other things all these Welch acolytes do to save money is cut R&D, research and development, i.e. the longevity of the company.

It gets worse and worse. Welch fires 10% of the employees every year, resulting in a cutthroat worker environment. No one will take the time to help anybody else, they need to keep their numbers up, they can’t waste any effort.

And it’s not only Welch, how about Jeff Bezos and Howard Schultz? Things are so bad in America that workers are starting to unionize. Not only the uneducated laborers, but the college educated who can’t get a better job themselves, get on the corporate gravy train. And rather than embrace unions, Amazon and Starbucks fight them all the way, they don’t want to give up an iota of power. That’s right, the corporation rules and you’re a fan, after all, who else is there to believe in, musicians hawking perfume and clothing, trying to suck the tit of corporations which laugh at these “singers,” who don’t realize they’re the tools that are being used.

Rather than rebelling against corporations, people EMBRACE THEM! Get tattoos of them. And their leaders, who call themselves “rock stars,” are looked to for answers about anything and everything, tell us they know better, when in truth they’re clueless and helped cause the problems to begin with! Watch “Borgen,” politics is a professional game. You’ve got to negotiate for a result. Instead we’ve got bozos in Congress who believe stonewalling steers the country forward. Hell, they should close down for a week and watch the last season of “Borgen.”

As I said, people on the inside know all this. But there’s never been a book that’s laid it all out, put it all together in such a damning way. One guy, Jack Welch, set in motion a transformation of society much bigger than the social issues discussed on TV, that too many Americans make their voting decisions upon, if they vote at all.

As for planning for the future? Just in time inventory programs made it so when the pandemic hit…there were no supplies. Yes, to cut costs, to increase the numbers, to make the stock go up, the corporate CEOs took everything off the books. Jobs were outsourced. Someone else built the parts, they held the inventory. Boeing stopped making almost all of its planes in-house and turned over manufacture to outside vendors. Why? Not because Boeing was doing a bad job, but to save money, to make the numbers look good, to make the stock go up, so the CEO could get ever richer! As for the problems this caused… Well, hundreds of people ultimately lost their lives, not that these execs are contrite when this happens. That was another one of Welch’s credos, fight back, don’t own it, it’s not your fault if there’s even a problem to begin with!

But almost no one will read “The Man Who Broke Capitalism.” Because they don’t read books to begin with. Unless they’re genre tomes, romance, mystery, if that! Or self-help from these same guys who ruined the economy to begin with!

And “The Man Who Broke Capitalism” is not the easiest read, it’s far from tough, it’s highly readable, you’ve just got to be interested. And it’s not even that long.

And it doesn’t matter if you’re left or right, Democrat or Republican. This isn’t a political issue, other than the government letting these companies rape and pillage without even paying any taxes, barely regulated. Everybody is affected by what these companies do.

Be the first on your block. Read “The Man Who Broke Capitalism.” You won’t stop talking about it. We’ve got to start somewhere.

—
Listen to the podcast:
—
@Lefsetz
—
Subscribe to the LefsetzLetter