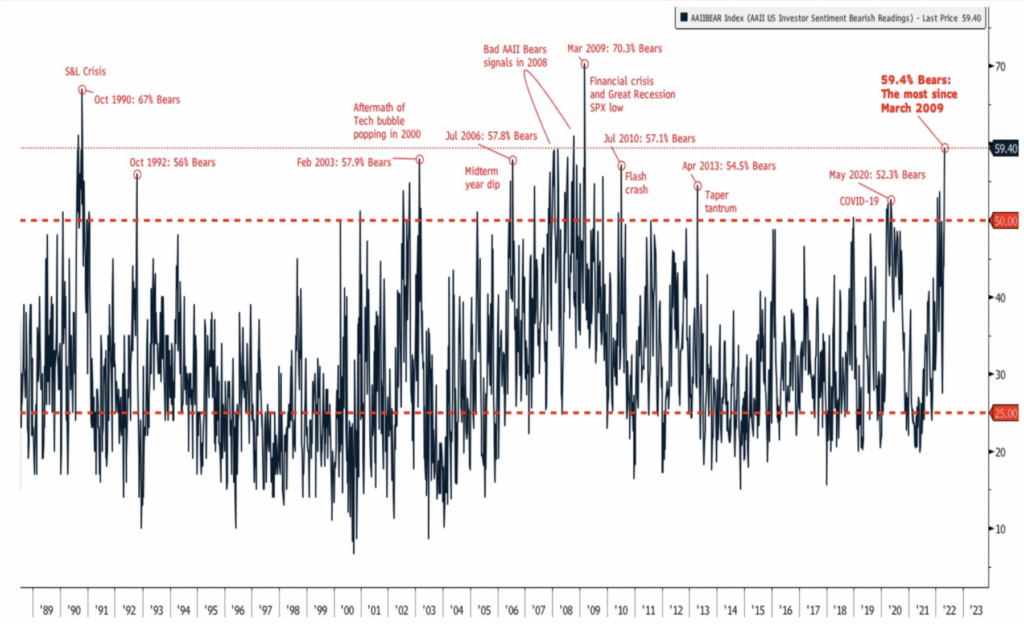 I just put the finishing touches on the quarterly conference call for RWM clients. The chart you see above showing how much negativity is out there – it’s an AAII measure of bears, annotated by BofAMerrill Lynch – and it is one of my favorites from the deck.

Bears at 59.4% is a surprisingly high reading — it’s worse than the Flash Crash, worse than Taper Tantrum, worse than the 2020 COVID Crash. But it’s nowhere nearly as bad the Great Financial Crisis, where the bear readings were 70.3%.

I say “surprisingly high reading” relative to the drawdowns we have seen.  When we look at the markets, they are “only” off modestly: S&P 500 off 14% is a very average drawdown; NASDAQ down 22% is not especially terrible. But despite those readings, sentiment remains very poor. Maybe the timing helps to explain why:

-And, this move lower was pretty much straight down.

I’m sure you can think of other reasons why sentiment is so negative: the Russian invasion of Ukraine, persistently high inflation for six months, expectations of increased FOMC rate hikes, fears of recession, lots of people believe the country is on the wrong track, etc.

All this negativity and this spike in bearish sentiment makes me wanna buy equities with both hands. But alas, prudence requires a more thoughtful approach. Regardless of your desires, any one indicator by itself is rarely sufficient to drive a substantial change in portfolio allocations. There simply are too many moving parts to rely on a single variable.

That said, we are getting close to the point where a substantial countertrend rally takes place. In the long run, these are just noisy ways to work off excesses in one direction or another. Overall, I believe we remain in a secular bull market, one that has enjoyed a decade of above average performance and two years of substantially excessive returns.

If we finish 2022 anywhere between flat to down it would be a case of healthy mean reversion, and a good set up for 2023. Maybe that’s a bit of my wishful thinking creeping in, but that is how I have been seeing these markets for quite a while.

What Happens When You Buy Stocks in a Bear Market? Ben Carlson, March 20, 2022

Previously:
Single vs. Multiple Variable Analysis in Market Forecasts (May 4, 2005)