Yves here. The UN assumes that farms around the world will need to feed 2 billion more people by 2050. I suspect Mother Nature/the Jackpot will dent those numbers.

Almost 10% of the 8 billion people on earth are already undernourished with 3 billion lacking healthy diets, and the land and water resources farmers rely on stressed to “a breaking point.” And by 2050 there will be 2 billion more mouths to feed, warns a new report from the United Nations Food and Agriculture Organization (FAO).

For now, farmers have been able to boost agricultural productivity by irrigating more land and applying heavier doses of fertilizer and pesticides. But the report says these practices are not sustainable: They have eroded and degraded soil while polluting and depleting water supplies and shrinking the world’s forests. The FAO report discusses some important climate change impacts, such as changing distribution of rainfall, the suitability of land for certain crops, the spread of insects and other pests, and shorter growing seasons in regions affected by more intense droughts. While not the sole source of obstacles facing global agriculture, the report makes clear that climate change is further stressing agricultural systems and amplifying global food production challenges.

The report also offers hope that the problems are solvable: Water degradation can be reversed by turning to smart planning and coordination of sustainable farming practices and by deploying new innovative technologies. More sustainable agriculture can also help fight climate change: For instance, the report notes that wiser use of soils can help sequester some of the greenhouse gasses currently emitted by agricultural activities.

Drastic changes in climate will require regions to adjust the crops they grow. For example, the report predicts that much cereal production will probably have to move north, to Canada and northern Eurasia. Brazil and northern Africa may have a harder time growing coffee, but it may get easier in eastern Africa. A changing climate “may bring opportunities for multiple rainfed cropping, particularly in the tropics and subtropics.” And for areas “where the climate becomes marginal for current staple and niche crops, there are alternative annual and perennial tree crops, livestock, and soil and water management options available.”

The report recommends seed and germoplasm exchanges globally and among regions, and investments to develop crops that can withstand changes in temperature, salinity, wind, and evaporation.

The changes will not be easy, the report says, but they may be necessary to avoid widespread hunger and other catastrophes.

Over the past 20 years, the global population has risen by more than 25% from just over 6 billion to nearly 8 billion people. The amount of land used to grow crops has increased by just 4% over that time, as farmers have been able to meet the growing demand for food by dramatically increasing the productivity per acre of agricultural land. They’ve done so, for example, by increasing use of diesel-fueled machinery, fertilizer, and pesticides.

But these practices have come at a price. “Human-induced degradation affects 34 percent (1,660 million hectares) of agricultural land, the FAO reports. “The treatment of soils with inorganic fertilizers to increase or sustain yields has had significant adverse effects on soil health, and has contributed to freshwater pollution induced by run-off and drainage.”

This degradation is especially extensive on irrigated farmland. Irrigation has been critical for meeting food demand because it produces two to three times as much food per acre as does rain-fed farmland. But irrigation also increases runoff of fertilizers and pesticides that can contaminate soil and groundwater.

Similarly, the quality of 13% of global soil, including 34% of agricultural land, has been degraded. This degradation has been caused by factors such as excessive fertilizer use, livestock overgrazing causing soil compaction and erosion, deforestation, and decreasing water availability. 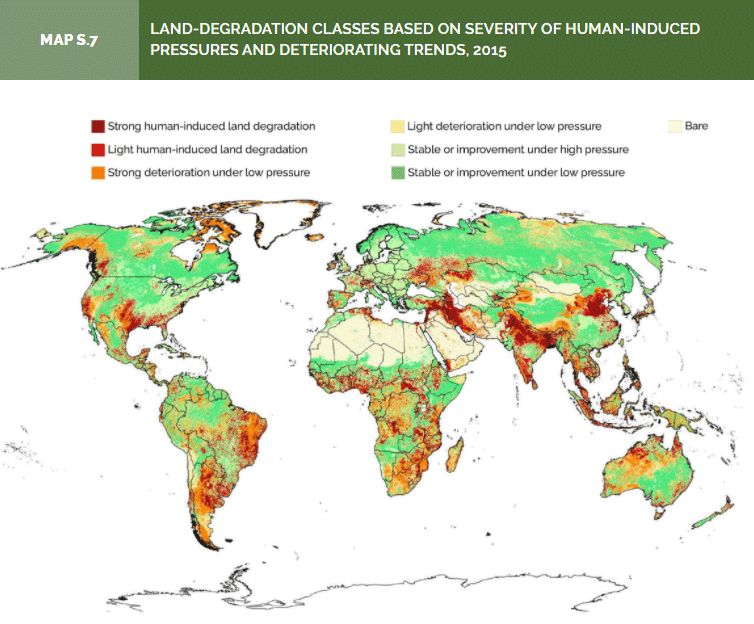 Deforestation trends offer one relatively bright spot in the FAO report. The global forested area has declined by about 1% (47 million hectares) over the past decade, but that is a significant improvement from the nearly 2% decline (78 million hectares) in the 1990s. And in the November 2021 international climate negotiations in Glasgow, 141 countries, covering 91% of global forested area, agreed to halt and reverse forest loss and land degradation by 2030. It remains to be seen, of course, how many reach those commitments.

Climate change exacerbates farmers’ challenges by making weather more extreme and less reliable. Extreme heat can stress crops and farm workers while increasing evaporation of water from soil and transpiration from plants, thus amplifying agricultural water demands. Here too, it’s not all bad news: Agricultural productivity is expected to increase in regions that are currently relatively cold, but decrease in places that are hotter and drier, especially as climate change exacerbates droughts.

As with others, farmers will need to adapt to the changing climate, and making those adaptations can be expensive. For example, as the primary or sole producer of many of the country’s fruits, vegetables, and nuts, California effectively acts as America’s garden. But climate change is exacerbating droughts and water shortages in the state, and farmers are struggling to adapt. About 80% of all almonds in the world are grown in California, generating $6 billion in annual revenue, but almonds are a very water-intensive crop. As a result, some farmers have been forced to tear up their lucrative almond orchards. It’s a stark reminder that “adaptation” can sound easy on paper, but in practice can sometimes be painful and costly.

Adaptation will nevertheless be necessary in the face of an anticipated 50% increase in food demand by 2050 (including a doubling in South Asia and sub-Saharan Africa), extensive land and water quality degradation, and a changing climate. The FAO report recommends four action areas to continue to meet rising global food demand.

Solving these multiple problems will require planning and coordination, the FAO writes in the report, and “data collection needs to improve.” Again, a bright side: The technology to improve data collection already exists, and advances in agricultural research have also put other solutions within reach. What is needed now is for policymakers and planners to coordinate work with farmers to adopt more sustainable practices and adapt more quickly to the changing climate. So, while the food system is currently at a “breaking point,” these more sustainable solutions are all within reach.