Unintended Consequences, Part II: What if LTCM Was Not Rescued?

Unintended Consequences, Part II: What if LTCM Was Not Rescued?

This is part II of our Unintended Consequences/Counter-factual series; part one on Chrysler is here. More to come next week.

Before the subprime housing market imploded, before Lehman Brothers went splat! and AIG went boom! and Bear Stearns went Ka-Pow!, there was Long Term Capital Management (LTCM).1 In so many ways, it was the precursor for the Great Financial Crisis.

LTCM was founded by John Merriwether, the former vice-chairman and bond trading chief at Salomon Brothers. Two of LTCM’s principals, Robert C. Merton and Professor Myron S. Scholes, won the 1997 Nobel Prize for their work on determining the value of derivatives. They quickly became the hottest hedge fund in the land.

The firm scoured the globe looking for new investment opportunities. It soon discovered tiny inefficiencies in international bond markets. These fixed income arbitrages generated very modest returns; to goose the performance, the firm used some leverage. Lots and lots of it: At its peak, LTCM held $129 billion of assets against equity of less than $5 billion, amounting to a 27-to-1 leverage ratio. All that borrowed capital was a lot of risk. To manage it, LTCM created complex mathematical models it believed would allow it to successfully navigate all of that highly leveraged risk.

That belief turned out to be rather unfounded.

All it took to blow up the fund was a small hiccup. That risk event was the 1998 default by the Russian government on its currency bonds. The subsequent global bond market turmoil spelled the end for LTCM. Had this happened to a less leveraged hedge fund, it would have quietly wound down; its counter-parties and creditors would have been paid, its limited partners (aka investors) would have had their capital returned losses of I’d guess between 25-40%.

What happened instead was very different: With potentially enormous financial losses to large U.S. banks and brokers — namely, that $125 billion dollars in borrowed capital — a bailout was quickly devised. On Sept. 23, 1998, Alan Greenspan, then Chairman of the Federal Reserve, working with William McDonough, then president of the Federal Reserve Bank of New York, “persuaded” the 14 largest financial firms — only Bear Stearns refused to participate — into posting $3.65 billion to buy all of the assets of LTCM. Those $125 billion in leveraged assets also included derivatives with a notional value of more than a trillion dollars.

Does that capture your attention?

The rescue plan assumed that once the bond markets stabilized, LTCM’s trades could be safely unwound. To help, the Fed kept rates steady, added liquidity to the system, allowing the volatility in international bond markets to subside. The banks eventually unwound all of those LTCM positions at slightly better than breakeven. 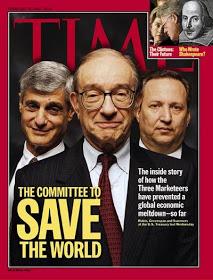 Media accolades poured in. TIME put Fed Chair Alan Greenspan, and Treasury Secretaries Robert Rubin and Larry Summers on its cover as “The committee to save the world.” The chaos surrounding a liquidation of LTCM would have, in Chairman Greenspan’s words, “caused the markets to seize up.”

If all of that sounds somewhat familiar, congratulations – you have been paying attention to the past 20 years of bailout news. LTCM was a dry run for the leveraged subprime derivative disaster that was to come a mere decade later in 2008-09.

Understand the Moral hazard presented: Wall Street figured out it could juice its profits by engaging in ever-riskier behavior because it understands someone else bears the consequences of that risk. The lesson bankers and traders learned was that if and when excess risk-taking leads to disaster, the Fed could be counted on to add liquidity and protect the Street against catastrophic losses.

This was the worst possible lesson to be learned.

Imagine if a more sophisticated Federal Reserve Chairman had said to all involved. “Hey, this is your mess, not ours. The Central Bank of America is not in the business of bailing out speculators. Figure it out yourselves.”

Now consider in the face of that statement, a counterfactual of what might have happened had we had a such an enlightened Federal Reserve that did not orchestrate this bailout:

The collapse of LTCM would have been a painful loss for its wealthy institutional and private investors. Their capital of $4 billion dollars would have been wiped out. But that’s a relative drop int he bucket; the more painful loss would not have occurred until LTCM was forced to reflect market prices on its positions. With its capital evaporated, LTCM would be broke. “Mark-to-market” of actual portfolio asset prices would have triggered margin calls. The firm would have had no choice but to default on that $125 billion in credit extensions and loans from its banks, brokers and counter-parties. The failure to meet billions in obligations would have forced LTCM into bankruptcy.

With no assets left to be distributed, those creditors would have felt very real pain. How much are used Herman Miller Aeron chairs worth? Claw backs from prior years profit compensation to the managers would have been a long litigation with a dubious outcome. I assume it was a total wipe out — a zero — for all creditors involved.

Among the biggest counter-parties was LTCM’s prime broker, Bear Stearns. A few other future stars of the 2008-09 crisis were also involved. The collapse of LTCM could very well have triggered the demise of Bear. At the very least, senior management would have been fired; a new set of risk management rules would have been implemented, along with a full audit of Bear Stearns forward risk posture.

All of those deadly securitized subprime mortgages scheduled to blow up a decade later? They might never have even happened – at least not at Bear.

The rest of the Street would have been deeply affected as well. 125 billion dollars in losses in 1998 was real money to even the biggest LTCM’s creditors, lenders and counter-parties. Disappearing that much capital in so quickly a time scares the bejesus out of the S.E.C. and the Senate Banking committee. Greater regulations would likely have come out of the damage. Derivatives, Hedge Funds, leverage all come under much greater scrutiny in this scenario. Academic papers get written; the firm’s collapse becomes a business school case study. Perhaps Wall Street might even have become more circumspect about leverage and risk levels, including those associated with sub-prime credit markets.

What about those complex mathematical models that LTCM deployed which failed to capture all of the nuanced risk in obscure markets? Despite what its models suggested, “Fat Tails” do not follow the normal distribution patterns. The Street would have learned that purely quantitative risk models fail to capture all potential outcomes, including the “unknown unknowns,” that present existential risks to any firm that uses them.

Allowing any bank or fund to amass a trillion-dollar derivative position without funding reserves against possible losses would also have been seen as a “Systemically dangerous” business model. Two years later, Congress would not have passed the Commodities Futures Modernization Act of 2000 (CFMA), which specifically exempted derivatives from usual insurance reserve requirements. Without the CFMA, no matter how many mortgages defaulted, AIG would not have collapsed.

And those enormous leveraged bets by an unregulated hedge funds on subprime securities? Perhaps the SEC decides those should not be permitted. The same goes for other high-risk trades, e.g., using massive leveraged to purchase assets in illiquid credit markets.

Perhaps we might have even recognized that all of the debt obligations of a single firm intertwined with the rest of Wall Street was deeply problematic, creating a huge systemic risk for the entire finance sector.

None of that occurred.

Instead, Wall Street learned precisely the wrong lesson from the LTCM rescue. Their takeaway was that if you are reckless or irresponsible or leveraged up, well, don’t worry, the Fed has your back. The Greenspan Put was alive and well, even if the future results of it was an even greater financial catastrophe.

1. Roger Lowenstein brilliantly details the history in When Genius Failed: The Rise and Fall of Long-Term Capital Management.