Since the Russian invasion of Ukraine, the US has repeatedly tried to coerce India into cutting ties with Russia, thereby abandoning its national interests. New Delhi, however, continues to spurn American attempts to subject its economy to Washington’s dictates.

The latest fuss concerns the G7 price cap on Russian oil and EU and UK bans on shipping and related services for Russian crude. India continues to have no interest in joining the US-led initiative as it gets a steep discount on oil from Russia and wants to maintain the relationship with a long-time strategic partner. Indian Foreign Affairs Minister Subrahmanyam Jaishankar was just in Moscow on Nov. 8 to discuss continued sales of oil. From the South China Morning Post:

India’s foreign minister hailed New Delhi’s “strong and steady” relationship with Moscow on Tuesday, during his first visit there since Russia invaded Ukraine in February.

Subrahmanyam Jaishankar also declared India’s intention to continue to buy Russian oil, again disregarding the US appeal to allies and partners to isolate Russia from the global markets.

The G-7 plans are likely to send oil prices higher (despite US Treasury Secretary Janet Yellen claiming the opposite) and reduce tanker availability, both of which will threaten India’s energy security and hurt its economy as India is the third-largest consumer and importer of oil worldwide.

Russia has said it will not sell to any countries that participate in the price cap scheme, and Jaishankar has repeatedly stated that India cannot afford to buy oil at high prices – at least not without undermining its economic growth, which is forecast to be 6.1 percent in 2023, the fastest-growing major economy in the world. According to Energy Intelligence:

Russia emerged as India’s top crude supplier in October, shipping over 900,000 barrels per day or roughly a fifth of India’s demand. The two countries’ biggest concern is ensuring that Russian oil continues to flow after the Dec. 5 EU and UK bans and related G7 price cap.

But despite Jaishankar’s bullish stance in Moscow, India’s state refiners have not placed orders for crude lifting beyond Dec. 5 due to uncertainties about whether shipping and insurance will be available, Energy Intelligence understands. And a recent attempt by an Indian buyer to use the price cap in negotiations with a Russian seller prompted the latter to abandon the deal, market sources said.

The ongoing lack of clarity on the G-7 could be by design. Russian oil exports have already begun to dip, and Bruce Paulsen, a sanctions expert and partner at law firm Seward & Kissel, told American Shipper, “ If guidance on [price cap] compliance doesn’t come soon, some industry players may sit on the sidelines until they can determine that shipments under the price cap are safe.”

The US, in a neat sleight of hand, quit pressuring India to adhere to the price cap, and Yellen now says Washington is “happy” for New Delhi to continue buying as much Russian oil as it wants, including at prices above a G7-imposed price cap. But there are just a few caveats: India wouldn’t be able to use western insurance, finance, or maritime services to transport the oil.

“Russia is going to find it very difficult to continue shipping as much oil as they have done when the EU stops buying Russian oil,” Yellen told Reuters on Friday. “They’re going to be heavily in search of buyers, and many buyers are reliant on Western services.”

More from Energy Intelligence on why this amounts to a de facto price cap:

Indian refiners have the capacity to soak up another 600,000 b/d of Russian crude, provided it outcompetes the staple Mideast grades that are the lifeline of the country’s 5 million b/d refining base. But the availability of shipping and insurance — and payment channels — is key. From Dec. 5, tankers and shipping insurance linked to EU and G7 countries — which dominate oil shipping globally — will be barred from trading Russian crude unless those volumes are sold under the price cap, as yet undetermined.

About 90% of India’s liquids trade is shipped by foreign tankers, presenting challenges, independent energy analyst Narendra Taneja said. Insurance does not appear as problematic, and analysts say that Russian and Chinese firms can handle it.

This could leave Russia reliant on a shadow fleet of older tankers with opaque ownership that do not transact in dollars. According to Freight Waves:

Braemar defined the dark fleet as tankers that have carried Iranian or Venezuelan crude at least once in the past year. It put the current total at 240 tankers, mostly smaller and midsized, with 74% 19 years or older. Eighty of those vessels are very large crude carriers (VLCCs, tankers that carry 2 million barrels) that won’t fit in Russian ports but could be used for ship-to-ship transfers for Russian cargoes.

If the entire dark fleet switched to Russian service and were as efficient as the “mainstream fleet,” it would be more than enough to keep Russian exports flowing, but “vessels engaged in illicit trading are highly inefficient,” Braemar emphasized.

At the same time Washington is pressuring New Delhi to comply with the price cap, it is importing from India more vacuum gasoil, which is mostly used at refineries to produce other products such as gasoline and diesel. From Reuters:

Russia used to be a key VGO supplier to U.S. refiners before the Ukraine war broke out.

“Given that the U.S. is not buying Russian oil, they are looking for any and all alternatives,” said Roslan Khasawneh, senior fuel oil analyst at Vortexa…

U.S. and EU sanctions do not apply to refined products produced from Russian crude exported from a third country as they are not of Russian origin. In India, refiners boosted imports of discounted Russian oil to 793,000 barrels per day between April and October, up from just 38,000 bpd in the same period a year ago, trade data showed.

India joins a list of countries – including Saudi Arabia, Serbia, and Turkey – that are causing heads to explode in Washington for refusing to be bullied into submission.

This all must be coming as a shock in Washington as its Indo-Pacific strategy in recent years has always included a “like-minded” India helping to counter China and do the US’ bidding in southeast Asia. The possibility that India might pursue its own national interests didn’t seem to factor into the strategy.

The tension over the Russian price cap is just the latest in a series of disagreements between New Delhi and Washington. US sanctions on Iran’s oil exports deprive India of cheap Iranian oil, and force it to buy more expensive US energy exports. India is now the largest oil export destination for the US.

Similar to the way Washington is arming Greece and Cyprus in an effort to bully Turkey into breaking off its friendly ties with Russia, the US is doing the same in Pakistan to pressure India. The US has begun to accommodate Pakistan again after the ouster of former Pakistani prime minister Imran Khan, who blames his loss of power in a no-confidence vote on the US.

In September, the U.S. State Department enraged India when it approved a $450 million deal to upgrade Pakistan’s F-16 fleet. Shortly after, the US ambassador to Pakistan created more tension during a visit to the Pakistani-held part of Kashmir, which he called by its Pakistani name instead of the United Nations-approved name “Pakistan-administered Kashmir.”

On Nov. 8 US State Department spokesman Ned Price lectured India on what are in its best interests:

We’ve also been clear that now is not the time for business as usual with Russia, and it’s incumbent on countries around the world to do what they can to lessen those economic ties with Russia. That’s something that’s in the collective interest, but it’s also in the bilateral interest of countries around the world to end and certainly over the course of time to wean their dependence on Russian energy. There have been a number of countries that have learned the hard way of the fact that Russia is not a reliable source of energy. Russia is not a reliable supplier of security assistance. Russia is far from reliable in any realm. So it is not only in the interest of Ukraine, it is not only in the interest of the region, of the collective interests that India decrease its dependence on Russia over time, but it’s also in India’s own bilateral interest, given what we’ve seen from Russia.

We’ll have to wait and see if the Indian people get the message because as of now the opposite is true.  India’s Observer Research Foundation released poll results on Nov. 2 that showed that 43 percent of Indians regarded Russia as their country’s most reliable partner, which was far ahead of the US at 27 percent.

Washington would be hard pressed to explain how New Delhi scaling back its economic ties with Russia would be a good thing for India.

Fuelled by a surge in import of oil and fertilizers, India’s bilateral trade with Russia has soared to an all-time high of $18.2 billion over the April-August period of this financial year, according to the latest data available with the Department of Commerce. That makes Russia India’s seventh biggest trading partner — up from its 25th position last year. The US, China, UAE, Saudi Arabia, Iraq, and Indonesia remain ahead of Russia.

India, Iran, and Russia have also spent the past twenty years developing the International North-South Transport Corridor to increase trade between the countries, and it took on increased importance with the western sanctions on Moscow. From The LoadStar:

The inland-ocean leg involves an estimated transit time of 35 days, compared with about 40 with previous traditional shipping, according to industry sources. 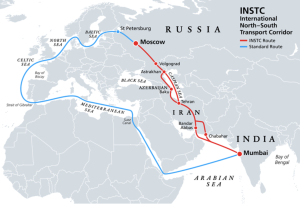 In much the same way that US heavy-handedness is backfiring elsewhere, the pressure applied on India seems to only be encouraging New Delhi to find a way around the dollar. The Loadstar adds that the Reserve Bank of India is also implementing new regulatory guidelines to help exporters settle shipments in rupees, instead of US dollars that had run into sanctions-related bottlenecks:

The Federation of Indian Export Organizations has also been pressing government leaders to extend the alternative currency method beyond Russian markets.

“While the Russia-Ukraine war is a setback to our exports in the short run, we are looking to increase our exports to Russia once the rupee payment mechanism gets operationalised,” FIEO noted.

While India has been benefitting from the discounted Russian crude, it also wants to maintain good ties with Moscow to avoid pushing Russia closer to China and potentially Pakistan, India’s biggest rivals in Asia.

Pakistan is also now asking the Russian Trade Ministry to introduce a currency swap arrangement to strengthen economic ties between the two countries.